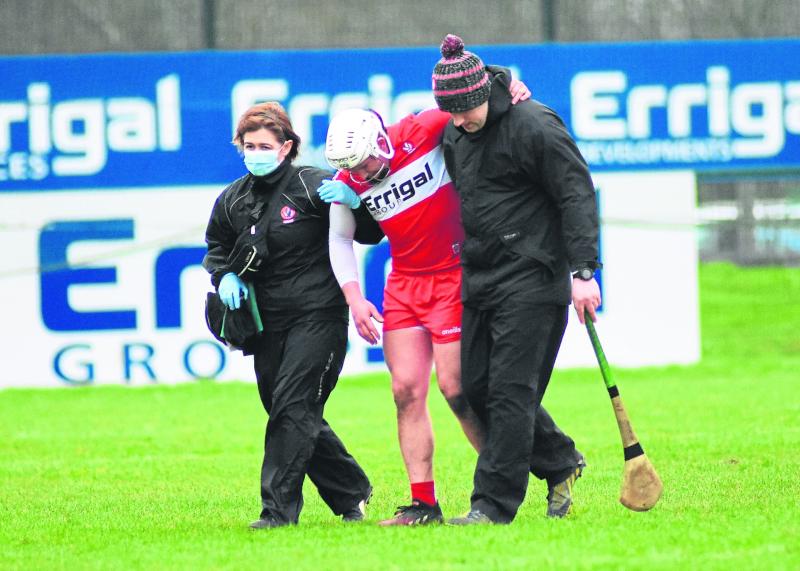 Richie Mullan is helped off the pitch in the last quarter of Sunday's win over Mayo. The Lynch's man has suffered a hamstring injury, as did his clubman Tiarnan McHugh. Pic by Mary K Burke

Derry hurlers will be without the services of two key men for a number of weeks after both sustained hamstring injuries during their win over Mayo at the weekend.

Derry hurling manager Dominic McKinley described his side's 4-24 to 1-14 victory as a 'good result' but lamented the loss of Richie Mullan and Tiarnan McHugh to injury.

“It was a good result, but it would have been a very good result if we hadn't picked up the injuries,” he told the County Derry Post.

“Richie has torn his hamstring and Tiarnan McHugh went off with his hamstring as well. We'll have to wait until they're diagnosed by the physios, but it's not the brightest for the both of them.

“Getting them back for any part of the National League and the Christy Ring is going to be tough, because they all run intertwined into each other.”

The 19-point win at Owenbeg on Sunday left the Oakleafers top of Division 2B with three wins from three and leading upcoming opponents Donegal on score difference.

With a first uninterrupted pre-season under their belts, McKinley is seeing the hard work paying off.

“We have a group of 35 players and they are all committed and working hard. Results go along with that, there is no rocket science to it,” he said.

“Once you create the environment of players coming in and training hard, working hard and committing to each other, results will follow that.

“You need 30-odd players prepared to put their shoulder to the wheel for Derry hurling, and at this moment and time, we're getting that.”