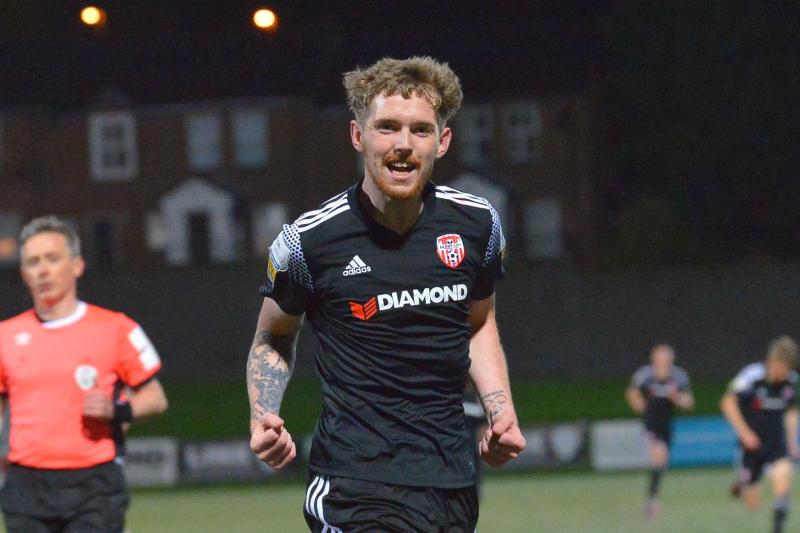 For all the talk of the new signings at Derry City, there is little to match the excitement of just what Jamie McGonigle can do this season.

On August 6 last, McGonigle announced his arrival at the Brandywell when he scored his first goal for the club against Drogheda United. Taking down a cross from Joe Thomson, McGonigle showed great control and terrific composure, not snatching at a half chance before burying it into the net seconds later.

He followed that with a penalty winner against Dundalk, as the Candystripes beat the Lilywhites at the Brandywell for the first time in almost 9 years, and if that wasn’t impressive enough, he followed that up with City’s ‘Goal of the Season’ at Dalymount Park. That night at Bohemians on September 10 will live long in the memory, particularly because of McGonigle’s goal, a world class effort from the corner of the 18-yard box which curled past James Talbot and into the top corner It was a special, special strike and confirmed to City fans what Ruaidhri Higgins already knew – McGonigle was a natural born goal scorer.

The Dungiven man, still only 25 years old, has over 100 senior goals to his name, and after a good pre-season he is being backed to be one to watch ahead of a season when big things are expected of Derry City.

“Aye a good pre-season was important to me,” he admitted. “I came in the off-season as well four times a week to try and build in a bit of fitness because I didn’t really get up to speed last year, with coming in so late to the season. Everybody’s been flying, training has been good and it’s been tough. There were two to three really hard weeks there and now it’s all on the football side and everybody’s just raring to go now.”

McGonigle is well aware of the talk about his potential in the League of Ireland, and just shrugs when asked about it. As cold as ice in high pressure situations – think of his late penalty equaliser at Finn Park in November; 1-0 down with four minutes remaining and City are awarded a penalty. Immediately Ruaidhri Higgins holds up 10 fingers – he wants his number 10 to hit it. There is no doubt, and McGonigle repays that faith by sending Mark McGinley the wrong way to pick up a huge point. There is belief in him from management and fans alike.

“You do hear it, especially nowadays with social media and that,” McGonigle admits. “Everybody sees these things but as I’ve said before there is always going to be pressure, especially when you’re playing for a club like Derry City. It’s all about just thriving on that.

“Whenever there’s big crowds in here it seems to get the best out of me, I like playing in them pressure situations. For me, it’s just about trying to do the best I can and score as many goals as I can and hopefully that helps the team to achieve whatever that may be.” 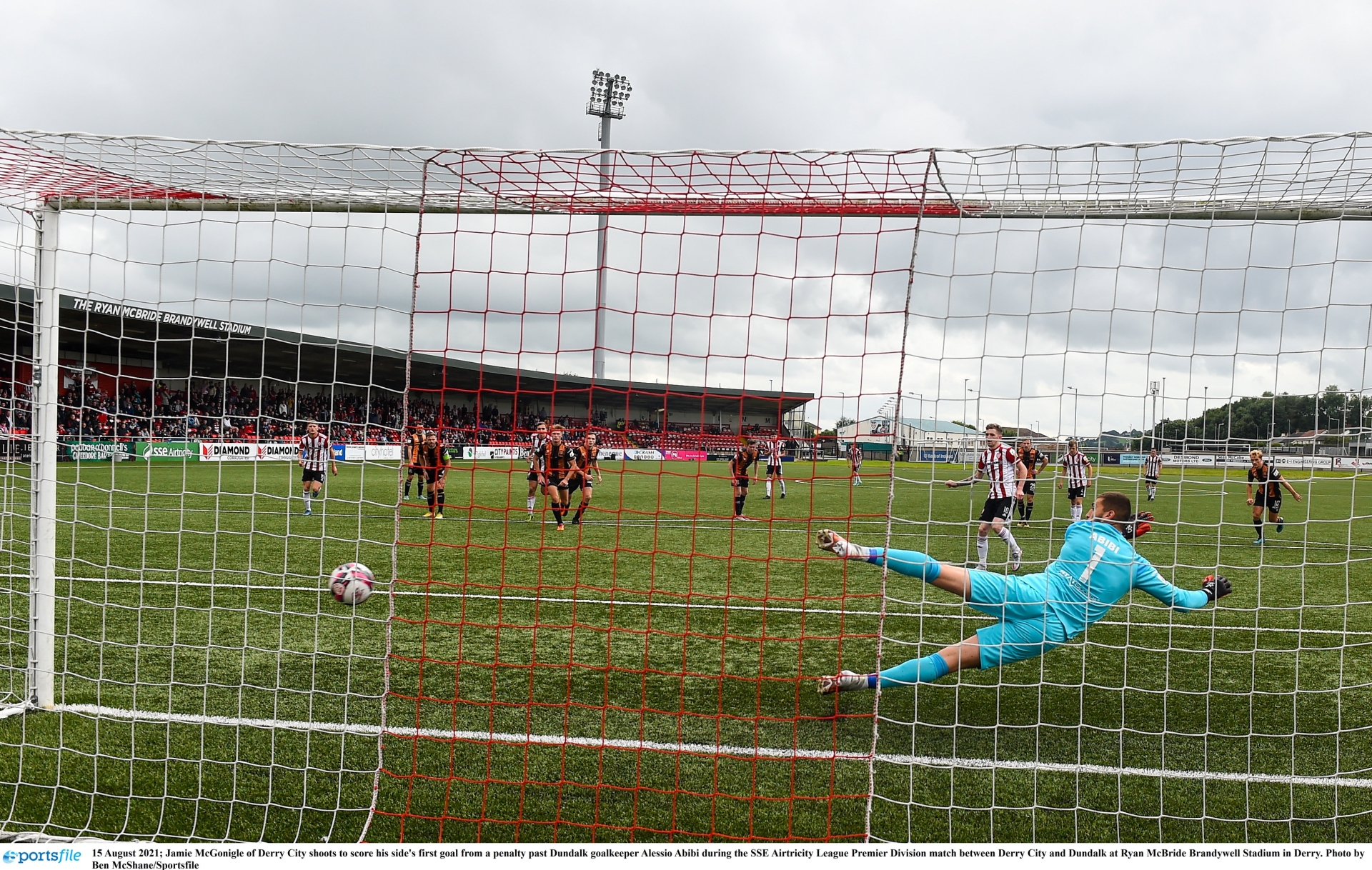 McGonigle backs himself as well, and already has a number in his mind when he thinks of the season ahead.

“I always do,” he laughs. "I always just have the figure twenty and I know it’s not really hit as much in this league as compared to the Northern Irish league but that’s still going to be my figure. I still want 20.”

“I had a few lucky strikes last season. I scored goals last year and I was happy with that. I ended up top goal scorer; it was only eight goals right enough but I just want to sort of kick on from that and hold that status as the top goal scorer. 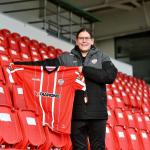 “I definitely do believe in myself. No matter where I shoot from; you might see me shooting from 40 yards in a game and people will wonder but, in my head, I’ll see it going into the top corner so it’s just the way I am. When I shoot, I always think I’m going to score, I’m always going to back myself.”

With players like Patrick McEleney, Michael Duffy and Will Patching now at the club, the attacking arsenal at Derry’s disposal is impressive to say the least. McGonigle has already seen glimpses of that attacking potential. Particularly in two pre-season games against Institute and Longford when the Candystripes scored 11 goals.

“I always knew they were good players, but then seeing them first hand it is frightening how good they actually are,” he continued. “Even playing for sixty minutes with Mickey against Longford was unbelievable. Now with Fats coming in as well, even Matty smith as well who just signed there it’s really exciting times to see how many chances we can actually create.”

“I think, as you said there, you take it with a pinch of salt as it’s pre-season and that. If you look at the two games there’s maybe only one or two chances missed, so we were scoring the majority of the chances, hopefully that’s just a sign of things to come.”

Derry City will face Dundalk, Shamrock Rovers and Sligo Rovers over the space of 11 days as this new-look team is thrown completely in at the deep end. Regardless, McGonigle just can’t wait to get started.

“You couldn’t get a harder start but I wouldn’t have it any other way,” he said. “Literally from the off, to see where you’re really at when you go to Dundalk to playing Rovers here and as you say Sligo, it’s a good test. Who knows? If you get a good start then at least the confidence will build and if you don’t then there’s another game to bounce back. I’ll not looking at it that easy I’ll just be looking at it for wins all round.”

McGonigle was just over a year old the last time Derry City were crowned champions of Ireland, and while title talk may still just be a dream, the reality is that the club are building towards challenging for the biggest trophies on a more consistent basis. With only one trophy – the 2018 League Cup to show for the past nine years of effort, fans are understandably impatient to be involved at the top once again. The next few weeks will certainly give an indication of how far the club has come in a shirt time.

Derry Middleweight aiming for 15-0 this weekend

“I don’t think we’re going to get too far ahead of ourselves to be honest,2 McGonigle cautioned. “We’ve a good squad of players here and it’s just about sort of trying to get off to a good start and just keep winning games and see where that gets us to be honest and just try to build on last year.”

“I think it was well documented the bad start that Derry had last season and then obviously the turnaround, so we just have to make sure that doesn’t happen this season, and as I said just see where it takes us from there.”