The 14-year-old performed well in the heats in Spain. 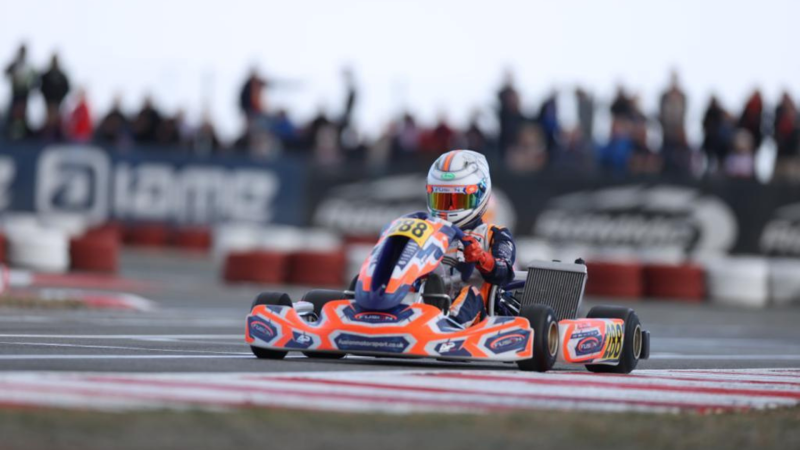 A County Derry teenager has made a promising senior debut as he took the next step in his motoring career.

Fionn McLaughlin of Magherafelt may not have had the result he dreamt of as the final of the IAME Winter Cup concluded on Sunday in Valencia, but over the course of race week, he established himself as a title contender heading into the first round of the European Championship beginning in March.

Fionn ventured to Spain with a top ten result and some track time in mind. This was a new beginning, a new challenge, his debut in the almighty senior class at just 14 years old, the youngest competitor in an ultra-competitive grid of 80 drivers.

The Magherafelt man attending St Pius College, had taken a well-earned break from racing over the Christmas period after a tough campaign in 2021 in which the Junior European title almost came his way.

Fionn commented afterwards, “I went to the Winter Cup hoping to gain some experience in the faster senior class and use it as a warm up for the main championship starting in March, I didn’t think too much about a result and was simply hoping to learn the new kart and tyres”.

Without realising, McLaughlin thrust himself into the limelight on Fridays qualifying session with a sensational lap time which saw him take pole position by a tenth of a second, a country mile in karting terms.

His lap time attracted the attention of the entire paddock including his competitors, many of which have been competing at senor level for a number of years right at the pinnacle of world karting.

Fionn delivered his lap on the final attempt of three laps, precision driving to final thousandth of a second extracting every last ounce of performance from himself and kart.

It was an outstanding achievement from the local man, under pressure with the eyes of the motorsport world watching on, he delivered.

More worryingly for his competitors, he did it with such ease, grace and confidence. This was his time and no-one was going to beat him. He had laid his marker and the other 79 drivers would have to raise their game to challenge him.

As the race day approached, Fionn took no chances in his heats where a poor result or damage can ruin your grid position for the main final on Sunday.

He stayed in the top four in all races including a scintillating drive in heat two, which saw him pull away from the rest of the field at over half a second a lap.

So much so, that his team where worried about the impact his speed might have on his tyres for the rest of the day. He duly backed off and conserved his lead, taking victory by a comfortable margin at the chequered flag.

Fionn reflected on his weekend on Saturday evening before finals day; “We had a great 2 days, I didn’t expect to be as competitive against this field on my first attempt, I did the perfect lap in qualifying and it was enough for pole which we were delighted about.

The store said it was important to 'give something back'.

"The team gave me a great package. My heats where steady and consistent today, we tried some different setups and we have a good grid position for tomorrow’s super-heat.

A good grid position indeed as Fionn would start Sundays ‘super-heat’ off grid two. He dared to dream of winning the winter cup at senior level on his first attempt.

Unfortunately, things didn’t go to plan on Sunday morning. Fionn was forced wide on turn one and from then he was on the back foot, he survived to still qualify on position nine for the main final which would decide the winner.

The dream was dented, but still very much on and if anything, he was now more motivated to complete the impossible.

As he sat on the grid for the main final, this was it, the anxious crowd watched on, the atmosphere was tense, everyone wondering if this was the start of a new era, a time where only the best can deliver, a time where pressure causes mistakes from the weak and increased ability from the strong.

The race started, Fionn was on the limit, in the zone, up to 5th and on a charge to the front. He was coming and his competitors knew it.

The determination was visibly in his body language, he was picking them off one by one until disaster. Another driver - who received a penalty for his actions - braked too late and hit the back of McLaughlin pushing him off the track and sustaining damage to his steering.

The dream was over and the youngster was gutted. Fionn commented after the race, ‘I’m so disappointed, I had a great start, I felt good and my kart was perfect.

It was going to be a long race but I believe I would have been there at the end and done enough to win. Unfortunately, this is motorsport, these things happen, we will take the positives from this weekend and move on. We will come back stronger and better from this weekend’

In the end, it wasn’t to be, however an amazing first weekend at senior level for the local driver and its surely a sign of things to come for the rest of the season.

Fionn will compete in the European and British Championships. Keep an eye out for this rising star in the future.

Top spot on the podium for Magherafelt's Fionn McLaughlin