The Derry City striker top-scored in his first season with the Candystripes. 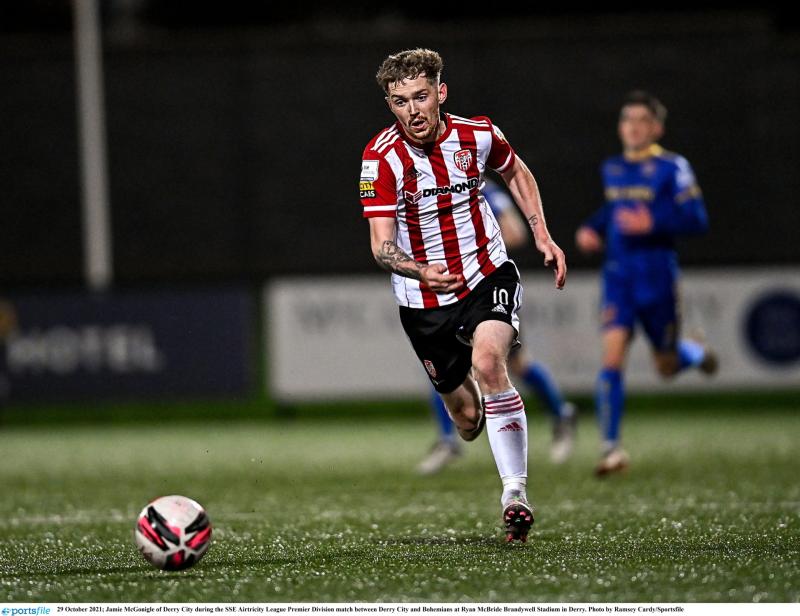 Ahead of Derry City's new season, which kicks off with an away game to Dundalk on February 18 club sharpshooter Jamie McGonigle took time out to chat with Mary K Burke.

The Dungiven man who was City's top scorer in his debut season, despite joining midway through the campaign says he doesn't feel any pressure going into the 2022 season.

“When you play for a big club like Derry City there is always going to be pressure and expectation,” said McGonigle.

“I was delighted to finish as top scorer in my first half season. It has made me really look forward to what we can achieve this season.”

McGongle started his football career as a youth at Dungiven Celtic, a club which his entire family has long connections with and he has nothing but praise for the local set up, even though by the time he reached adulthood other clubs had come knocking.

“It’s a hard one because I only actually played a handful of games for the first team at Dungiven Celtic, but it’s a club well run and full of good people,” he said.

Looking back on his early days, McGonigle enjoyed his underage development without any pressure and that may have contributed to the free flowing style he shows today.

Michael Duffy off the mark with two goals

“I played every couple of years between Dungiven Celtic and Newton Youths/Limavady Youths throughout my underage and I never felt any pressure at all playing for Dungiven Celtic if I’m honest.

“I think it’s maybe because you know everyone and probably being young I didn’t know what pressure was,” he laughed.

Sport was such an integral part of McGonigle's family home and he had no shortage of local heroes to admire, but he paid particular credit to boxer Paul McCloskey, former British and European super lightweight champion,

“I think in terms of a local inspirational sportsperson I would have to go for Dudey. He's a Dungiven man who made it to the professional stage and has done well in his career. In other terms I'd also have to say my Da - if he was as good as he tells us all he was, he must have been some player in his day,” laughed Jamie.

McGonigle has become a bit of an insipration to the next generation of boys and girls in his home town, although it doesn't sit easily with his naturally quiet nature.

“I am aware of the increased interest in Derry City's fortunes around home. Seeing young people about the town in Derry City tops or jackets shows that interest is definitely increased. My younger brother Darach would tell me about other young boys using my Fifa player which I still find a bit funny.”

McGonigle thrives on the matchday buzz at the Brandywell.

“Playing at a packed brandywell is phenomenal. The noise the supporters make is brilliant - so loud. I love playing in front of big crowds, I think it brings the best out in me," he said.

Jamie isn't the only local hero in the family, his younger brother Kian won an All Ireland minor championship with Derry last summer.

“Kian winning an all Ireland was a proud moment for us all. I was down at the game and for the last few minutes my heart was in my mouth. 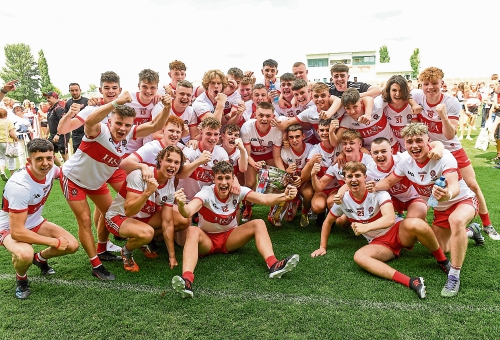 The victorious Derry minor side. Pic by Sportsfile.

“The sheer relief and joy when the final whistle went is indescribable. They fully deserved it after having a brilliant year.

Kian is following in Jamie's footsteps in playing for their local GAA club, St. Canice's and he isn't ruling out getting a game or two under his belt again before retirement comes calling.

“I played Gaelic mainly at underage and up as far as minor and a maybe a few u21 and senior games and absolutely loved it. I still miss playing it, but for the career I have now I wouldn’t change anything. Maybe I'll go back later on down the line,” added Jamie.

“Our minor (u18) side were a very good team. We had won the league, however we fell in the championship to Glen, who had that brilliant minor run winning year after year which we’re seeing come to fruition now in their seniors. But that year was probably my favourite playing year as far as Gaelic football is concerned.

McGonigle earned international caps with the Northern Ireland U21 set up and although he enjoyed the experience, he doesn't see any future call ups.

“I really enjoyed my time at the u21s but I’m not expecting to get any more call ups if I’m honest.” 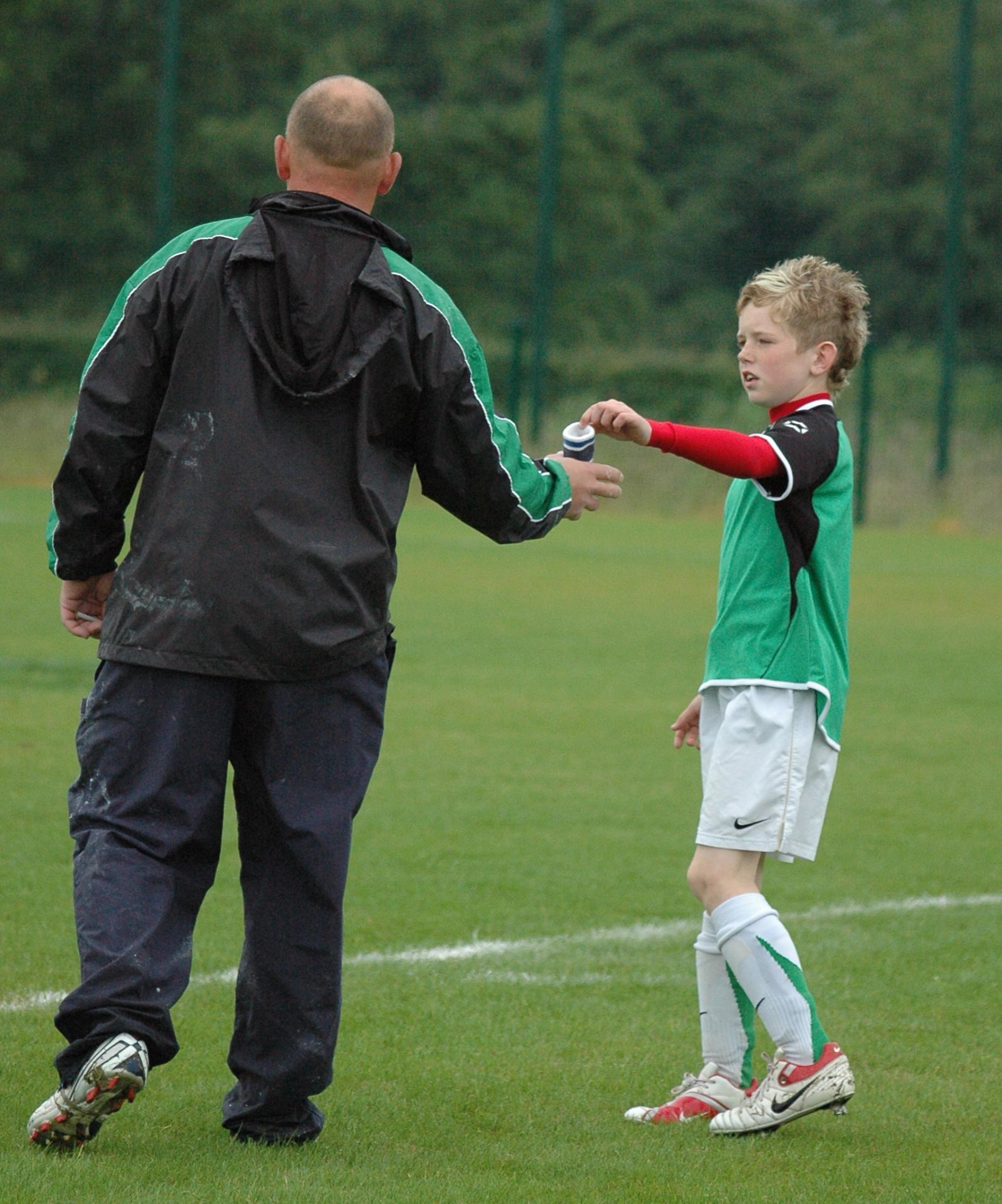 “I think I enjoy it a bit more. I was on record before describing it as a bit more tactical. There are quality players in both leagues, but I think the League of Ireland is more playing out from the back and things like that.”

Having won a League Cup with Coleraine, and qualifying for Europe with Derry City it's a tough call for the Dungiven man to choose a favourite moment of his career,

“Winning the Irish cup with Coleraine was a massive moment for me. Securing Europe with Derry City was a huge accomplishment also for the turnaround in the season. But I’d have to pick the Irish Cup simply because there is a trophy and medal to show for it. My first major honour.

“We’ve had seven brilliant signings so far at Derry City and I don’t see myself under pressure, if anything it excites me as more top quality players will be there. It will bring out the best in me.”

Looking ahead, McGonigle sees himself firmly rooted at home for the future,

“I had hopes when I was younger of playing in England but I’m 25 now and the chance of going over now is getting less and less.

“I’ve bought a house and all now and I’m engaged so I’ve more to consider now than just myself. I wouldn’t rule it out if the right offer came along,” he smiled.

A keen golfer, if McGonigle wasn't playing football he would have loved a career on the golf course.

“Without a doubt if I could play any other sport professionally it would be golf. I love playing it now as a hobby and I've managed to get down to playing off 6, so hopefully I can knock a shot or two off that this year.

No doubt McGonigle will be hoping to find the net early in the league, and continue to build on his goal scoring run from his debut season.

New City attacker is ready to get going