McKinley call for full support for inter-county game in Derry

"I don't see why players won't take the opportunity," said the manager. 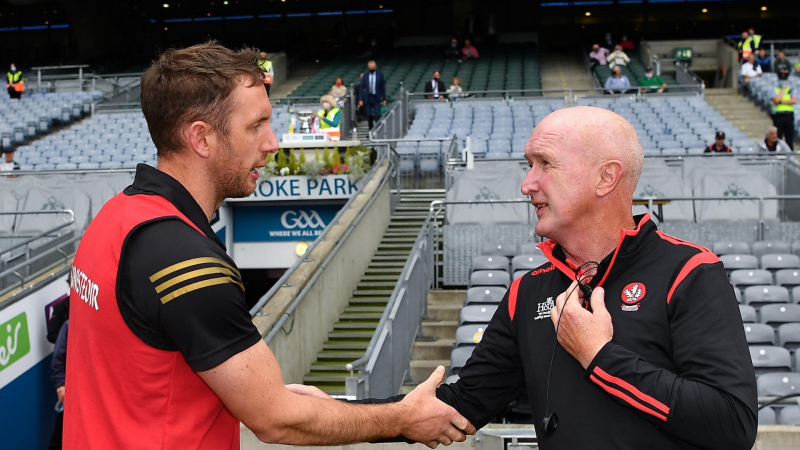 Dominic McKinley is ‘disappointed’ that more hurlers don’t throw their lot behind the Derry county team and feels the environment would help lift the standard of the game across the club scene.

The former Antrim star accepts that the day of the inter-county dual player has passed. The level of commitment and the fixture calendar mean that Brendan Rogers, Paul McNeill, Shane McGuigan, Chrissy and Karl McKaigue are never going to be able to commit to the county.  He commented last season how that ship had already sailed.

While he has added seven players this season – of which four are stepping up from U20 level – Derry had to work with a small panel last year after seven players stepped away from county action during the league.

By the time they reached Croke Park, Derry didn’t have enough fit players to fill out their match day squad of 26.

“We’d hadn’t a great deal of success getting other players out,” says McKinley and continues with his plan to blood those that came through the Celtic Challenge winning U17 teams.

“If I hurled in Derry and if somebody asked me to play county hurling, I’d be thinking ‘I’m going to selfish here’ and I’d try to be the best I can,” said McKinley, who’d love to still be playing. said.

Regular training, a series of games, a strength and conditioning programme with all the supplements provided.

“Players are looked after and quite rightly so, due to the level of commitment.  You’d have the best players in Derry playing hurling and the learning you are going to get. I can’t see why players won’t take the opportunity,” he said.

McKinley is loath to again use the example of Slaughtneil, but points at extra hurling as an avenue for other clubs to catch them.  He also feels that Banagher’s run in the club championship will help their development in the long-term.

“To me, if you not going to then how are you ever going to close the gap on the other teams, if you don’t match what they are doing,” he asks, while pointing to some players who consider hurling a second sport when the football season is over.

"Hurling is not like that and you will never catch up with people…that’s what a lot of them are doing.”

Derry kick off their NHL season at home to Sligo this weekend.
ADVERTISEMENT - CONTINUE READING BELOW