Derry kick off their NHL season at home to Sligo this weekend. 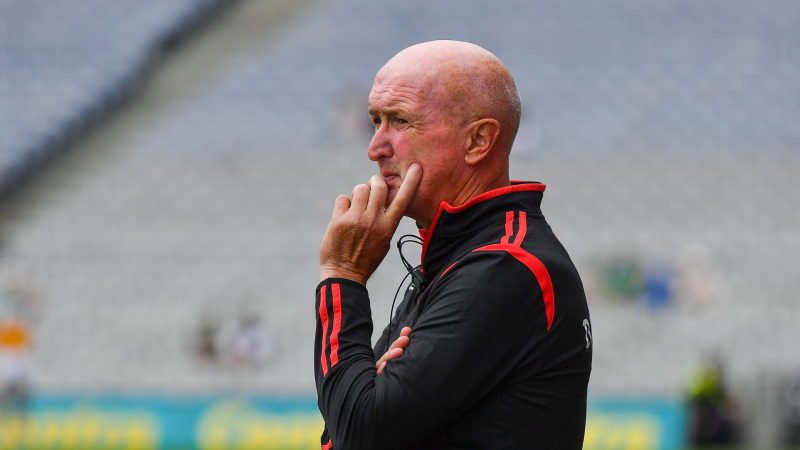 Dominic McKinley has set his sights on reaching Division 2A. Pic by Ray McManus/Sportsfile.

Derry joint manager Dominic McKinley eyes a top three spot as the Oakleafers face into a sixth season in Division 2B.The 2016 season saw Derry fail to win a game and it has been a mixed bag since.

They needed a play-off to avoid further relegation in 2018.  In John McEvoy’s two seasons, they lost narrowly to Wicklow and emphatically to Down in promotion finals.

Last season, when the top team was promoted, defeats on their travels to Mayo and Kildare had their season in tatters before it got off the ground.

The league brings a different format this year, with the top team through to a league final against whoever comes through a semi-final between the second and third placed teams.

“We’d be disappointed if we don’t make the final of the league,” McKinley told the County Derry Post.

“That will be our target, we would want to be in that top three.  The longer this goes and the more time we have to get these boys settled in, we’ll get better.”

The Loughgiel man is once again part of a management team that includes joint manager Cormac Donnelly, former players Kevin Hinphey and Conor Murray, with Eoin McNicholl once again looking after the strength the conditioning.

With players on club duty with Slaughtneil and Banagher, Derry were working with a panel of 21.  It left preparations tight and with a further seven players unavailable with college duty and injury the decision was made to pull out of the Conor McGurk Cup.

Thursday night’s run out with Armagh was a third challenge game, following wins over London and Tyrone as they aim to get game time into the legs.

“If the attitude is not right and everybody is not at it, you could end up in trouble,” McKinley said.  “You could get turned over in a few of these (league) games.

“All these teams are working hard. Donegal are in a good place, they have got a lot of players in and they are going to be a sticky wicket too.  There is nothing to fear, but the next couple of weeks are very important to us.”

Starting with Saturday’s visit of Sligo, it’s game by game for McKinley.  Speaking last week, he stressed that no pressure would be put on Slaughtneil and Banagher players to make a return.

“It would be important that we can get them on board,” he said, indicating that he’d ‘have a conversation’ with them this week.

“There will be no pressure put on players to come back in,” stressed McKinley, an All-Ireland club winner with Loughgiel in 1983.

“We want them all back in, but we are wise enough to know that we’ll have to feel our way through that and have a bit of respect for them.

"People can recover quickly from those games (All-Ireland defeats) and other people can’t. You put your pride and all your energy levels into it, so you are left with a lull for a day or two.”

One player not back from last seasons is Alan Grant, who returns to club action after completing his rehab for a latest knee ligament injury. McKinley not closing the door on a possible return if the Na Magha man can get regular club hurling under his belt.

“Never said never,” he said.  “He is at a bad time in his career, he gave so much to the county as well.  At this moment in time, he is not in the panel. We are happy with the panel we have got.”

As well as having Mark Craig back in contention for the season after a prolonged spell with injury, Derry have added Lavey trio Fintan Bradley, Eamon McGill and Ciaran Hendry, the latter of whom is now experiencing a first taste of intercounty hurling after sustained form at club level.

“Fintan got an MRI scan on a back injury,” McKinley revealed.  “It is going to take time and he is a major doubt for this match (Sligo) but we are delighted he has returned.

Eoghan Rua goalkeeper Leo Passmore, his clubmate Kosta Papachristopoulos, Ballinascreen duo Eamon Conway and Aodhan O’Hagan gave been called up from the U20 squad that reached last year’s All-Ireland B final to the senior mix.

Last season finished off with a sobering defeat to Offaly in Croke Park in the Christy Ring Cup final. A return for May’s final is a very achievable target.

But the league represents Derry’s starting point and McKinley is targeting an increase in momentum as his full panel returns from club duty. A home win over Sligo would be a welcome start.

The Wolfe Tones man is held in high regard within the club.
ADVERTISEMENT - CONTINUE READING BELOW