The Magherafelt school face CBS in Armagh on Saturday. 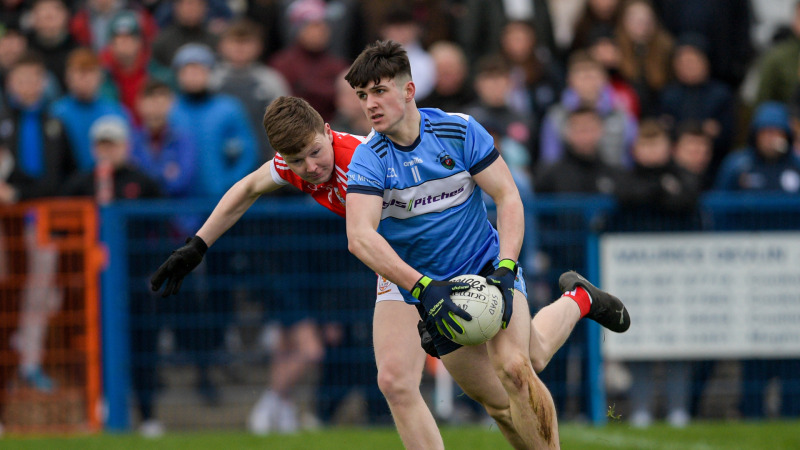 There’ll be picture and no sound at McElholm dinner table this week ahead of a novel family link in this weekend’s semi-final showdown.

John manages St Mary’s Magherafelt, while his son Eoin operates in the Omagh CBS attack and has scored four points in as many games leading Friday’s clash in Armagh.

Two seasons ago, McElholm senior cut a devastated figure as he watched Jody McDermott kick a stoppage time winner to clinch a Rannafast title for Maghera.

Magherafelt controlled the ball for long periods of a cagey final, but were left empty-handed when Cathal Chambers was fouled and McDermott stroked over the winner.

Cargin’s Conhuir Johnston is still the focal point of their attack that also contains clubmate Tom Shivers and Benan Kelly.Magherafelt have 10 of their team remain from the Rannafast campaign of two years ago.

James Gribbin is preferred to Tiarnan McOscar in goals, while Terry Devlin – Johnston’s attacking partner – is no longer on board. Devlin and Cookstown clubmate Michael Oscar Devlin are now part of the Holy Trinity squad.

Since then, the ‘Convent’ have transformed themselves into a slick outfit that have won all four games to date with an average winning margin of 12 points, including an eye-catching quarter-final win over St Patrick’s Dungannon.

A penalty from Niall O’Donnell – which he won himself – and wonder goal from Johnston left Magherafelt with one foot in the last four as they led Dungannon 2-8 to 0-6 at the break.

Desertmartin’s Ryan McEldowney has carried his fine club form into the MacRory campaign with a fine performance at midfield, while Ronan Walls continues to impress at wing back.

Ruairi Forbes gets forward to add to the scoring charts, while Derry senior player Eoin McEvoy is a key cog at centre back in front of Niall Rafferty who had a solid season of senior football in Castledawson’s defence.

In the maroon corner this weekend is an Omagh team – managed by Fermanagh senior manager Kiernan Donnelly – that needed extra-time to see off St Colman’s in the last eight.

Patrick McCann hit an early goal for Omagh – the third of three during the campaign – to give Omagh the perfect start.

In a nip and tuck encounter, St Colman’s led despite a rampant Omagh fightback.

Oisin Gormley did level matters before the Tyrone side missed to chance to win the game.

They made no mistake in extra-time, outscoring the Violet Hill College 0-6 to 0-1, thanks to points from Eoin McElholm, Seanie O’Donnell, Conor McGillion and substitute Caolán Donnelly.

John McElholm will know better than anyone what challenge Omagh will bring on Friday night.

St Mary’s have scored heavily this season and will again carry a threat.

If Eoin McEvoy can anchor their defence and Niall Rafferty can come out on top of his likely battle with Conor Owens, it could be a third final in six years for Magherafelt.

But Omagh will have plenty to say about that.