The team are hoping to improve on a silver medal finish in November 2021. 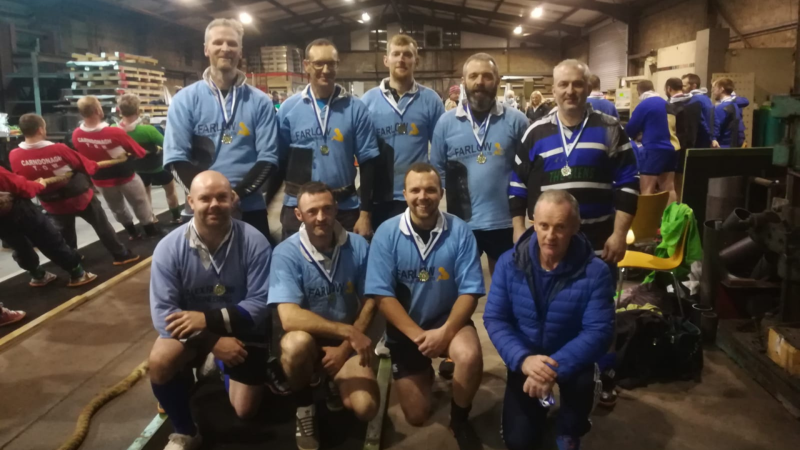 The Garvagh Tug Of War team will compete in the Nationals this weekend in Antrim.

Tug of War competitors and enthusiasts from across the region will converge this weekend at the Jim Baker Stadium, Parkgate to compete in the British and Irish Indoor Tug of War Championships.

Amongst the competitors will be the Garvagh Tug of War team.

Originally an outdoor team, the Garvagh side is made up of a compilation of Garvagh and Bancran competitors, and they have made the switch to indoor competition at very short notice, in fact this is the first time this group of men will compete at indoor at this level.

Speaking to the County Derry Post this weekend, team member Nelson Hannah says all of the side are looking forward to competing at this high level:

“We are mostly an outdoor team but we decided to go with the inside competition at short notice because things have been so unpredictable with the pandemic.

“We will be pulling as a team on Saturday in the 600kg class. There are eight men on the rope, but we carry a squad of twelve or thirteen men.

"We are made up of a mixture of Garvagh and Bancran men, and have one man from the Glens of Antrim in there too,” said Nelson.

Facing oppositon from across the North as well as Scotland, the Garvagh side know they will face tough opposition but are relishing the opportunity to compete:

“Well we all need to make the weight first, the weigh in takes place on Thursday afternoon so after that we will see where we are at. We train four nights a week on the rope, and then each man does their own individual training as well.

“This competition is normally a stepping stone to the World Championships set to take place in Holland but sadly Covid means that is cancelled, and so this is our season finale.

"We got a silver in the 640kg in November when we last competed, and so this competiton is our last pitch ourselves against the best teams and we will see how we get on,” said Mr Hannah.

Spectators are able to attend the championships this weekend with competitions set to take place on Friday and Saturday, all attendees must comply with Covid19 regulations.

More information can be found on the Northern Ireland Tug Of War Association Facebook page.

Derry men to face Ballygunner on Sunday in Parnell Park