Institute crash out of Irish Cup to Intermediate League side Portstewart

Late goal wins it for the underdogs 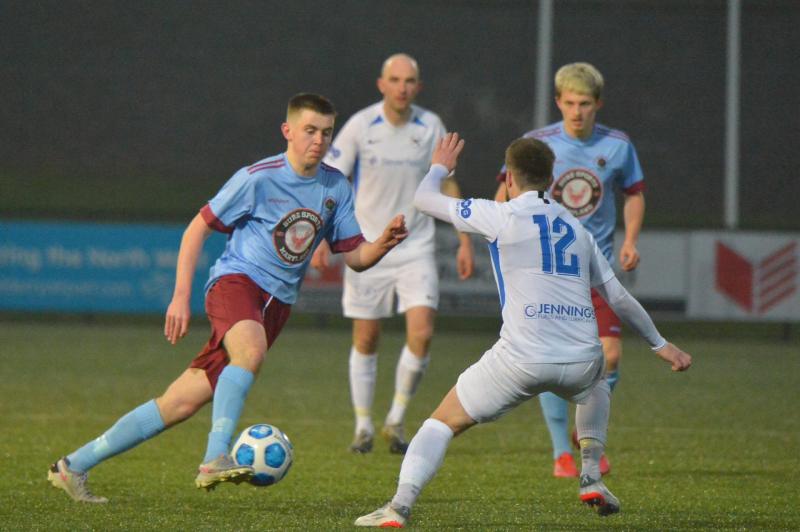 Institute fell to defeat in the Irish Cup.

A spectacular goal from Mark Edgar just six minutes from time sent Institute crashing out of the Irish Cup in the First Round.

The Portstewart forward found the net from over 30 yards, catching John Connolly off his line, to stun the home side, who had looked the more likely of the teams to score in the second half.

‘Stute were slow in making any real impact in this game, but they finally began to show signs of life after 20 minutes with Shaun Leppard just unable to direct a header at goal from Benny McLaughlin’s free kick before ‘Stute’s top scorer had a sighter himself, volleying straight at the goalkeeper from 18 yards.

The game needed a goal and ‘Stute did their best to provide it as they threatened on 48 minutes; Shaun Doherty picked out a great pass to find the run of Tiarnan Brown on the left and he went all the way into the penalty area before drilling it low into the centre, but the ball had too much pace and McLaughlin was unable to turn it in at the near post.

The chance that ‘Stute were waiting for finally came on 62 minutes when Benny McLaughlin was sent in behind the Portstewart defence.

The forward turned onto his left foot and looked to find the far corner, but goalkeeper Andrew Findlay produced a superb save to turn it behind for a corner.

From the set-piece, Findlay produced heroics again; McLaughlin met the delivery with a flicked header and it was headed for the net until the goalkeeper got a strong left hand to keep the ball out.

Extra time and penalties was beginning to look inevitable when Benny McLaughlin tried to break the deadlock with the most spectacular effort; the ‘Stute front man met a cross field pass from Shaun Doherty with an outrageous overhead kick which flew just over the bar on 80 minutes.

‘Stute looked like the only team interested in scoring, but Mark Edgar stunned everyone with an incredible strike on 84 minutes to finally make the breakthrough. The Portstewart man received the ball with his back to goal 30 yards out, and there seemed no danger until he turned and sent a speculative shot over a surprised John Connolly and into the net to make it 1-0.