Rory Gallagher said he was delighted to see the return of the McKenna Cup. 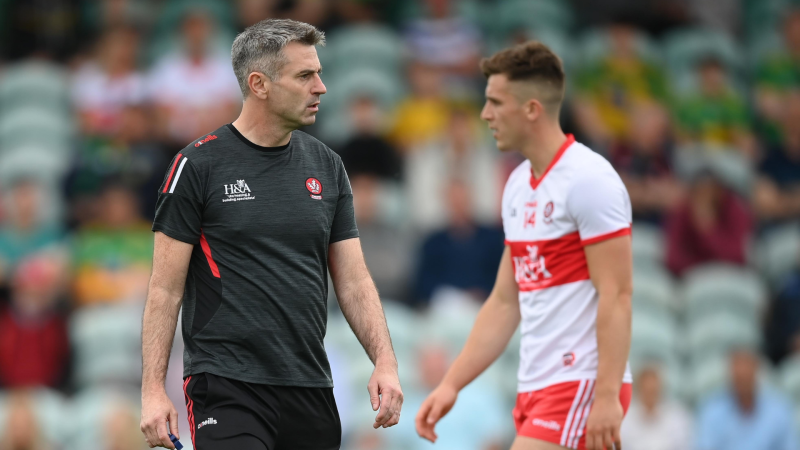 Rory Gallagher is grateful for the extra games ahead of the league campaign. Pic by Sportsfile.

Derry football manager Rory Gallagher is looking forward to a settled run of games after what he has described as a 'stop-start' first two seasons at the helm.

The Oakleafers get their 2022 Dr McKenna Cup campaign underway this Friday underneath the Owenbeg lights against Monaghan, with a week's break to their second group game in Fermanagh.

After a year's hiatus, Gallagher has welcomed the return of the competition, but is realistic about its place in his priority list.

“Personally, I'm delighted it's back, and I'd say the players are as well. It's competitive games. It's a lot more straightforward than the organisation of a challenge game,” he told the County Derry Post.

“All being well, there will be spectators there, and it's a far better environment for both experienced and newer players to play in.

“Any of the friendlies you play are with a purpose, they're competitive as well, it's just far better to have the environment of a stadium pitch, so we're delighted.

“Unfortunately, since we got involved, with the nature of Covid, things have been relatively stop-start, and even last year, we only really played six competitive games.

“It's not a dream at the start of the year to win the McKenna Cup, but at the same time, would I like to beat Monaghan and Fermanagh and get another game? I absolutely would.” 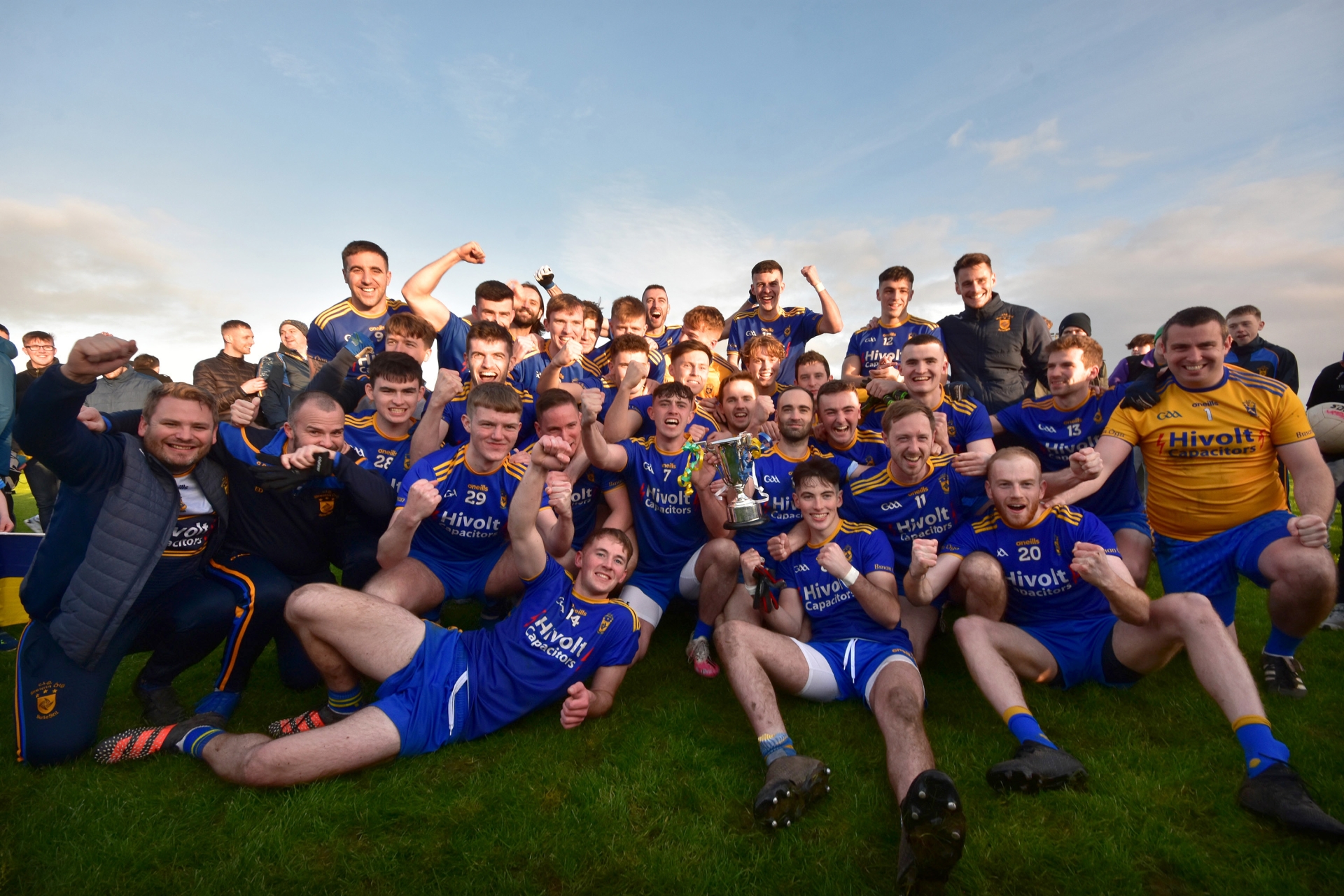 Derry club sides have had a hugely successful season, with Steelstown in Sunday's Ulster intermediate final and Glen and Desertmartin only seeing their season end shortly before Christmas.

The Glen players have returned to training with the county, but Slaughtneil's hurling success means their county footballers will be involved in the upcoming All-Ireland club hurling campaign.

However, Gallagher says the players have not been entirely absent from the intercounty scene.

“We thought the split season was in, and it would have been great for everybody, but even on the football side of it, the provincial championships should have been tidied up before Christmas,” he said.

“The Slaughtneil players will be focused on their All-Ireland club semi final, but we've learnt the lessons from a couple of years ago, when I first got involved and they were at the same stage.

“They've been good, they've kept their eye in with us as well and have been at a number of our sessions, and you have to give their management credit as well.

“They know the type of individuals they are – the McKaigues, Brendan and Shane – they're very serious about both sports.

“They haven't been doing a huge amount of on-pitch training with us, but we're very happy with their involvement to date and we're trying to work together.

“We'll have a view to all being ready for the first round of the league, no matter what.” 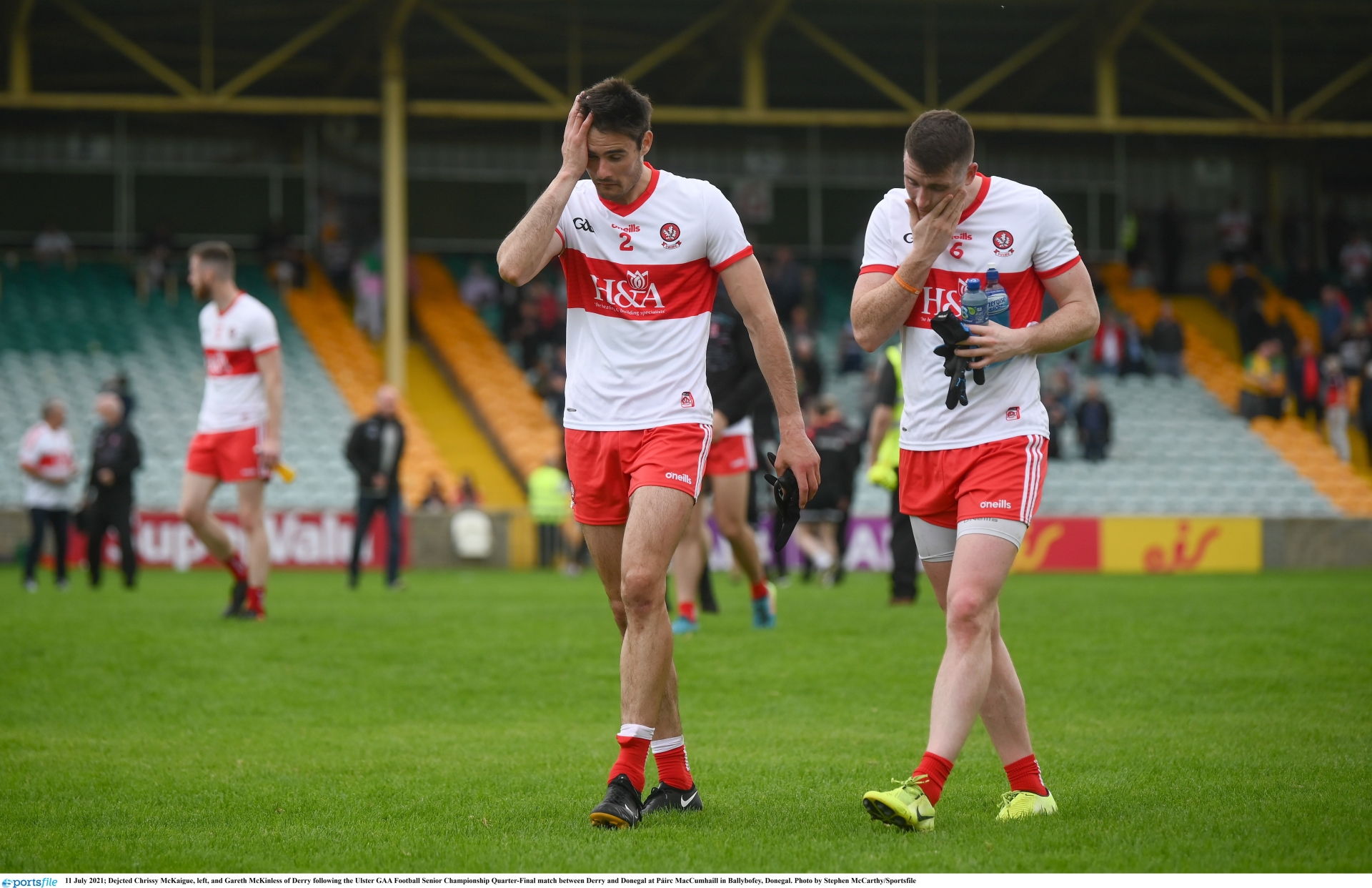 A dejected Chrissy McKaigue and Gareth McKinless leave the field after defeat to Donegal. Pic by Sportsfile.

On the face of it, last year was positive for the Oakleafers. The county won Division 3 in some style, achieving their aim of promotion to Division 2.

“We wouldn't have deemed it ourselves to be overly successful. We expected to come out of Division 3, we wouldn't be giving ourselves a clap on the back for that,” said the Fermanagh native.

“We expected to beat Donegal and we didn't. That's the disappointing thing, we feel we left it behind us. We always try to maximise our potential in the squad, and that's the challenge for all of us.

“There are two games in the National League before there's a break and everything is geared towards preparing properly to give us the best chance of winning those games.

“We'll go into those games against Down and Offaly and then we'll get a break. I imagine it's the same for all counties, but January is a very hectic month.

“You have the obvious thing of Slaughtneil and Steelstown, but we have guys involved with Sigerson, some involved with Freshers teams as well.

“It's about making the most of the periods of time we have all the players together and managing the situation to allow us to perform in those two games and review it after that.”

Tributes paid to one of Derry GAA's 'greatest unsung heroes'

Seamus Mullan, who was influential in the redevelopment of Celtic Park, passed away today.