The Banagher man celebrated victory surrounded by his family. 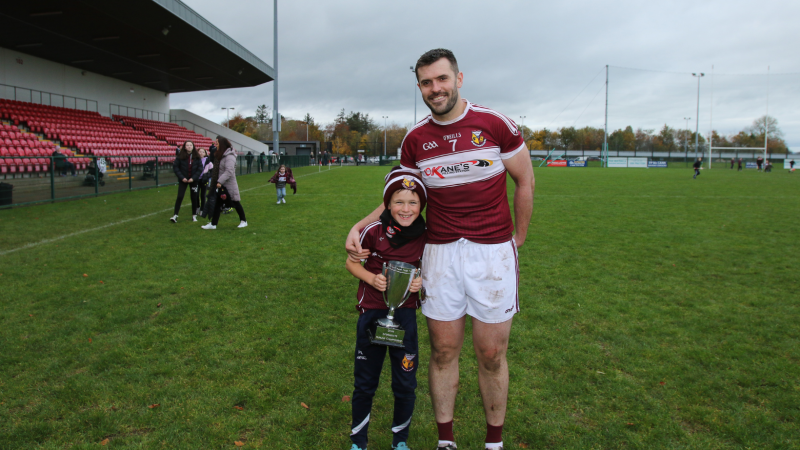 Like a fine wine, victory tastes better with age.

The smile on Mark Lynch's face as he celebrated clinching the Derry intermediate hurling title along with his family told you this one tasted sweet.

“It's nice when you're able to stand here with your children and the cup and have them in there for a photograph. It's some feeling,” he said.

“It drives you when you're leaving the house every night, and thank God I've a good woman at home that looks after them and lets me away to training.

“It's nice to have a bit at the end for all that sacrifice.”

Lynch played his part in a steely defensive effort that shut Lavey out, denying them the goal they so desperately needed and limiting them to just three scores from play over the hour.

He highlighted the strong bond between the six defenders, and the families involved; the McCloskeys, McGilligans, Farrens.

“There are families there you would do anything for,” he said.

“Every one of them can hold their own. There are lots of times I need help – I'm probably the weak link in that defence – and they help me out at times.

“Defence is massive. If you're leaking scores, you're stealing confidence from your forwards all the time. It's nice to be a part of that six.” At the back of the players minds is a dark, dreary day in November 2019, when they crashed out of the Ulster championship at the hands of Antrim champions St Enda's.

Lynch says the team are itching to make amends.

“It would be nice go do something better for sure. It's not nice to leave the way we walked out of that game,” he said.

“We didn't know what we were coming up against; it was the first taste of Ulster for a lot of men and we were a bit naïve.

“We were beaten fair and square that game, so we're hoping we can go a step further, but it's a step up and it'll be brutal hard.”