McGarvey: We didn't take our chances

The Lavey manager was bitterly disappointed with Sunday's result. 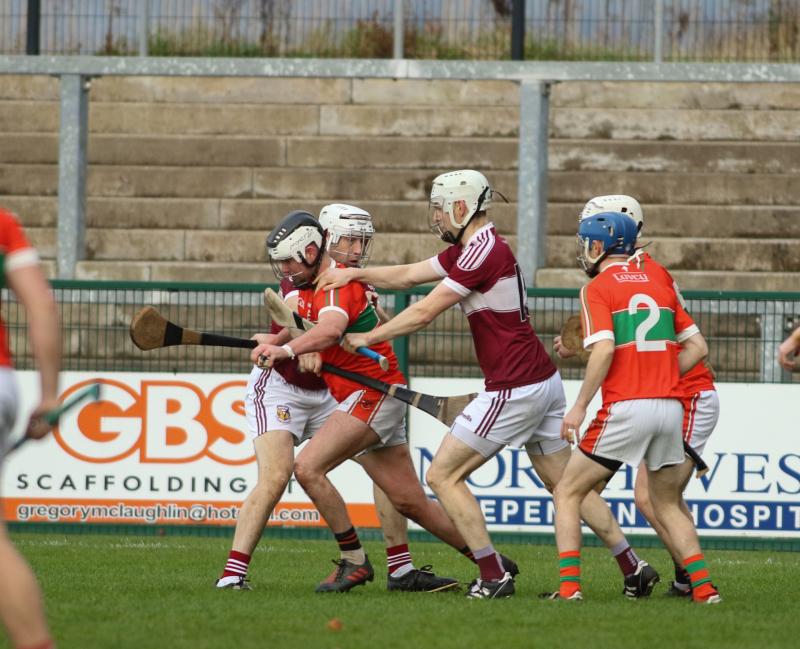 Action from Banagher's win over Lavey. Pic by Mark Doherty.

Johnny McGarvey's face was a picture of dejection after his side's intermediate final loss to Banagher at the weekend.

As the players trudged off the field to the sound of Banagher cheers, the Lavey manager lamented the game's missed opportunities.

“At half time we'd ten wides and two, maybe three in the goalie's hand,” he said.

“You have to be trying to get to 20 points, and you maybe bring that down to 15 or 16 at this time of year with the conditions, but Banagher took their chances and were clinical on the day.”

A mammoth defensive effort from the newly-crowned champions restricted Erin's Own to just three scores from play, with one coming from half time substitute Ryan McGill.

McGill and Cailean O'Boyle had entered the fray after the break to try and turn the game, and did have some effect, but again chances were spurned.

“We missed a good chance five or six minutes into the second half to go level, which was crucial, and then two 60-70 yard ones after that,” said McGarvey.

“Realistically though, you shouldn't lose a hurling match by conceding 13 points. If you concede that you should be winning, and that's very disappointing.

“Momentum is a big thing and it just seemed every time we were getting it, we made a mistake. Ryan Mulholland had a great goal chance with five minutes left and mishit the ball.

“Then we had the shot at the finish that we thought was in the net.

“It's bitterly disappointing but fair play to Banagher.”

In contrast, Banagher have had a clear run, and McGarvey described the situation as frustrating.

“I think it had an effect on the build-up.

“Since we beat Ballinascreen, we've had to deal with three football matches,” he said.

“That's a week lost in training for every player, because they're all on the football panel.

“That's not an excuse, it's a reality.

“We're a dual club and we all want to be successful and push on in both codes.

“This final should have been played two weeks ago.

“I don't know if it had much of an effect, but eight players played here the other night and it's hard to do.

“It's frustrating that we lost, but it's not an excuse.

“Banagher won the match fair and square and we've no issue with that whatsoever.”