'The future is bright for Sean Dolan’s'

Creggan club have restored 'pride' in 2021 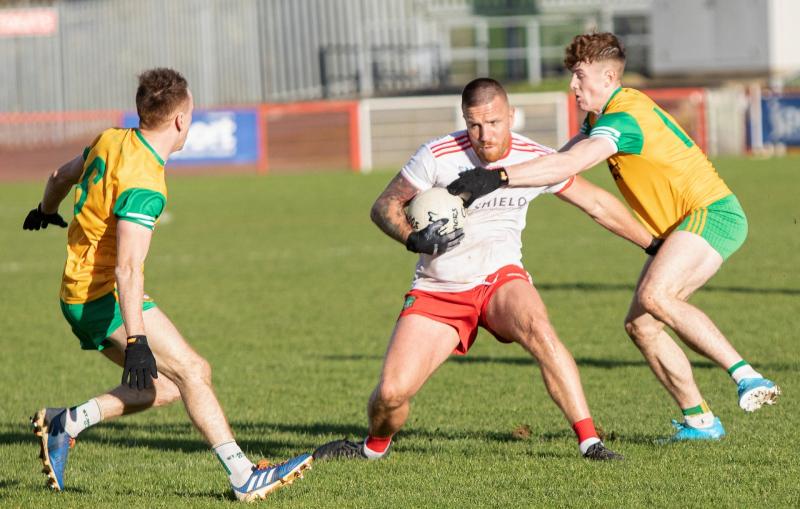 Sean Dolan’s manager Ciaran Wilkinson believes the club has put some gaelic pride back into Creggan in 2021 with their efforts on and off the field of play.

Saturday past was a painful day for Wilkinson and his players, who were hoping to surprise many, as they have done all, year by overcoming an incredibly talented Desertmartin team in the Junior Championship final at Celtic Park.

Unfortunately, it didn’t work out for Dolan’s, who fell to a 0-2, 0-12 defeat but having had time to reflect on the progress this year, Wilkinson sees the bigger picture more clearly. On Saturday, the better team won, but his club can count the past 12 months – from the Neal Carlin Cup victory to their appearance in the junior final – as one big victory also.

“We gave everything that we had but sometimes you just have to throw your hands up and say they were a level above. That’s the kind of work we have to put in. In that second half they were faster, fitter, stronger and the better team won. We have the ability there. We are hurt, so we’ll just have to regroup, take that one on the chin and just get back at it.  I blieve in them, so we’ll go again next year and we might lift it.”

Wilkinson had cause to be pleased at half time, with his team frustrating the reigning champions, who only crept ahead in the last seconds thanks to Gavin McGreevey’s point – the only score from open play in the first half. Had his team been a bit more clinical themselves, the 0-2, 0-3 scoreline at the break could have been much different.

“We should have been well ahead and we kicked ourselves out of it I think,” he admitted. “We had too many wides; we forced them into a few wides as well but we should have taken ours because they were a bit easier to put over. We worked on keeping them from scoring but that wind in the second half meant that they were able to put it over from 50 yards. You just have to hold your hands up.”

For Wilkinson, the destination in 2021 was more about the journey.

“We never give up and we never know when we’re beaten,” he continued. “We had an onslaught there in that match but our effort was there and the boys kept going. We have been written off so many times and for the boys to come back and come back – when you’re down you have to keep taking it and keep going and every time we were down and up against it, we fought back and won. We have put heart back in the team.

“I said last week we’re only beginning, and we are only beginning. We’re working from the grass roots, from children to girls and seniors. We have put a wee but of pride back in Creggan; Creggan are a proud people and I have seen people up there who I never saw before. They are getting involved. You talk about clubs and communities like Slaughtneils, Bellaghys and Ballinderrys, they live and breathe it. We’re starting something special and people are starting to buy in and if we can get people to buy in, we’ll be some force in the years to come.”