Creggan side show maturity and discipline to get the job done 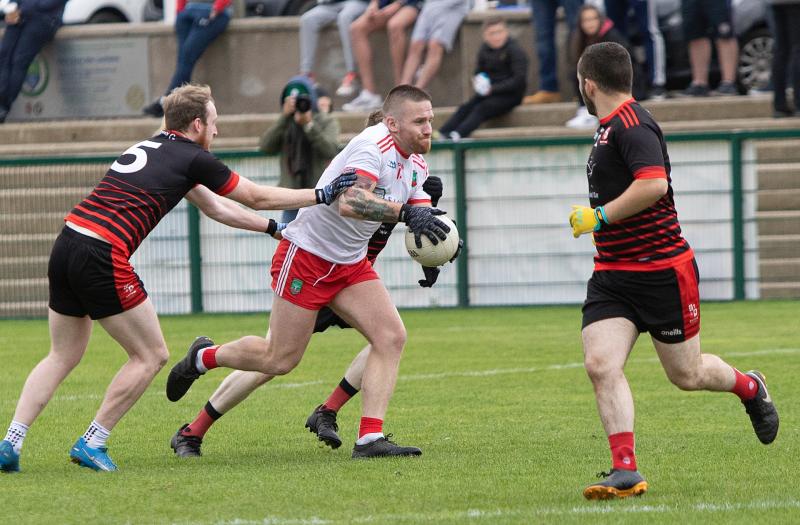 Sean Dolan's will face Moneymore in the Junior Championship semi-finals after beating Magilligan at Faughanvale.

The Dolans’ coaches were tearing their hair out, proverbially speaking, in the first 15 minutes, as their team should have been four points ahead, but instead found themselves one behind.

A Paul Melaugh free gave them the first score of the day, but it really should have been a goal instead as Kevin Nixon did well to put Gearoid McDermott through against Barry Mullan, but just as the forward was about to shoot, referee Cathal Doherty pulled it back for a Dolans free, when playing the advantage was the more obvious and desirable option from Dolans’ point of view.

Dolan’s then proceeded to hit the post three times in quick succession, Caolan McCusker twice and Ruairi Thompson all coming close, with the Creggan side having no luck at all early on.

McCosker eventually got his point but just after the first water break, Dolan’s found themselves 0-4, 0-2 down with two points each from Logue and Collie Mullan giving Magilligan the advantage.

There was little justice in that score line from a Dolans’ point of view and they worked hard to get level again before half time, although they were grateful for the six wides which Magilligan managed in that first half. Good work from Ruairi McGurk set up Mark O’Kane for a score and eventually Caoimhin Thompson brought it level at 0-4, 0-4, just before the break.

It was Dolan’s who started the second half strongly and scores from McDermott and Melaugh put them clear for the first time in the game. There was no pulling away however, as Magilligan, and in particular Logue responded every time, and that pattern continued until midway through the second half when a divide began to show with the scores at 0-7, 0-6.

A great score from Caolan McCosker from wide on the left sparked Dolan’s, who had gradually been getting on top, and that was followed by another accurate free from Paul Melaugh to put three points between the sides for the first time in the game.

Then came a decisive moment as James Payne, quiet by his usual standards, beat Joe Gallagher and closed in on the Dolans’ goal. Rather than go for glory, he made the wise decision to pass to Ethan McLaughlin, who was in a better position, but the forward was denied by a very important save from Ryan McCloskey, who had little to do in the game before that moment.

The trading of points continued, with Logue hitting back after scores from O’Kane and Melaugh, but the big question was on Dolan’s – could they finish their opponents off? At 0-11, 0-9 the answer seemed to be no as Kevin Nixon put a goal on a plate for Mark O’Kane, but the Dolan’s man smashed the ball off the crossbar.

That ensured a nervy finish with Magilligan just a goal away from a smash and grab victory. Twice they lofted balls right under the crossbar and twice they were fumbled over for a point. In the end, this was much closer than it should have been, but Dolan's can take plenty of positives heading into the last four.