Ruaidhri Higgins' team confident as they head to Tallaght 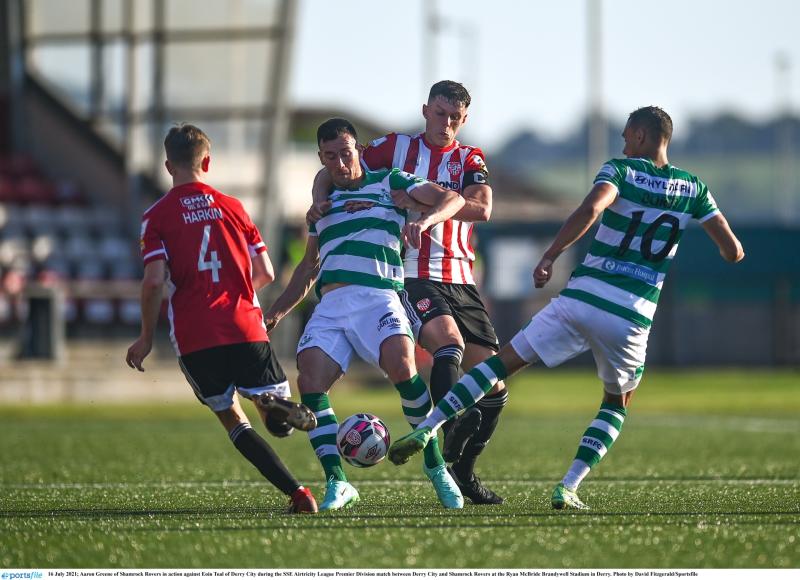 Derry City are hoping to end a four year wait for a win over Shamrock Rovers when they visit Tallaght this evening.

City have not beaten the Hoops since August 2017, when goals from Aaron McEneff and Barry McNamee earned them a 2-0 win in Dublin. Since then, results have been miserable against the current champions, with City losing 10 of 13 games in that period.

That could well change this evening as City head to Tallaght full of confidence and in the middle of a seven-game unbeaten run in the league. Ruaidhri Higgins’ team have come from nowhere to insert themselves into a battle for European football next season, and three points tonight could take them level with Sligo Rovers in third place.

The Candystripes are also full of goals at present, having scored eight in their last three games, with the three-prong strike force of Jamie McGonigle, Junior Ogedi-Uzokwe and James Akintunde each having scored in the past two games.

It has been a good news week also for everyone involved with Derry City, with the club confirming that Dundalk’s Michael Duffy has signed a pre-contract agreement of four years to come back to the Brandywell.

But all eyes are on matters on the pitch, starting with tonight’s game, with Higgins knowing just how important each league point is between now and the end of the season.

“It won’t make or break our season that’s for sure, but Rovers are the best team in the land,” he said. “They are the benchmark for everybody to get to. It looks like they will be champions again and we know it’s going to be an extremely difficult task, but confidence is high and we’ll go there and give it a go.”

Higgins has watched his team push Rovers close twice this season; a controversial equaliser denying City a win in the 1-1 draw at Tallaght in May, before Rovers overturned a 2-0 deficit to win 4-2 at the Brandywell in July.

“Both games against Rovers that I’ve been involved in, there wasn’t an awful lot between the teams,” Higgins reflected.

“Rovers’ quality and experience in the second half at the Brandywell was there for all to see and they blew us away in a 15–20-minute period. We have improved from then and it will be a great test for our players.

“Obviously we have huge respect for Rovers and the quality they have, but we’ll go there and do our best to win the game, as we do in every game. Our players are in good form as well so it should be a good game for both sets of fans.”

Midfielder Joe Thomson sits out the final game of his three-game suspension, while winger Marc Walsh remains sidelined with a long-term injury.