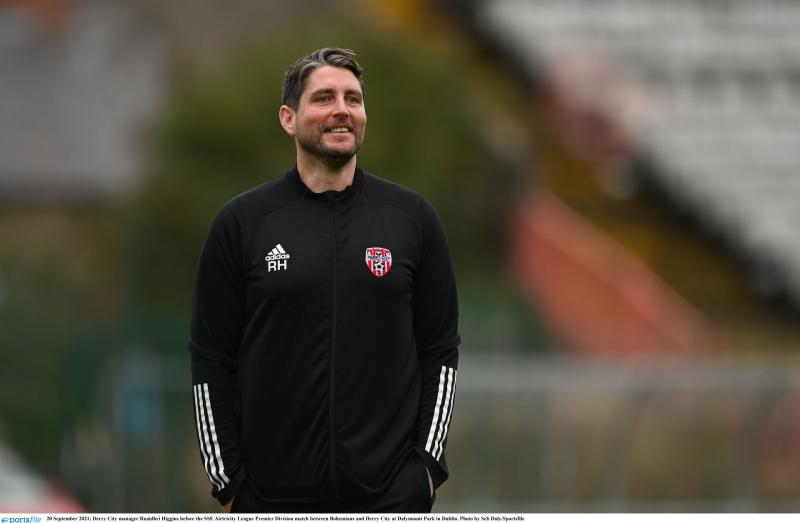 Ruaidhri Higgins is building a strong squad for next season.

Ruaidhri Higgins does not want the signing of Michael Duffy to deflect attention from the work still to be done by Derry City this season.

The 27-year-old has agreed to return to his home town club, joining Patrick McEleney by signing a pre-contract ahead of next season.

It is huge news for City fans, who last seen Duffy in red and white back in 2014, where he hit 20 goals in 78 appearances for the Candystripes. Since then he has gone on to play for Celtic, Alloa, Dundee and Dundalk, where he has been since 2017.

It is huge news for Derry City, but Higgins, whilst delighted with the signing, does not want the focus taken off the remainder of this season.

“It’s great news for the club,” he said. “He’s still a Dundalk player so we have to respect that but we look forward to welcoming him in the off-season and pre-season.

“I don’t want us to get sidetracked and take our eye off the ball because there is a lot of football to be played between now and the end of the season.

“The players and the staff have been brilliant and shown their quality so we need to remain focused on the final league games and try and pick up as many points as we can and see where it takes us. Everyone is working really hard and rolling in the one direction.”

Higgins did admit however that he is eager to finalise his squad for 2022 as soon as possible.

“We’ll get stuff done when we can, but I just think it gives you more time to plan and prepare when you now what your squad is going to be,” he stated. “Things are going okay and we’re getting plenty of work done in the background.”

The Candystripes travel to Tallaght tomorrow to face champions Shamrock Rovers hoping for three points to boost their chances of European football next season.

City are unbeaten in seven league games and are just three points off behind Sligo Rovers in third place, with Bohs four points further behind with a game in hand.