Looking back at Duffy's first steps in senior football 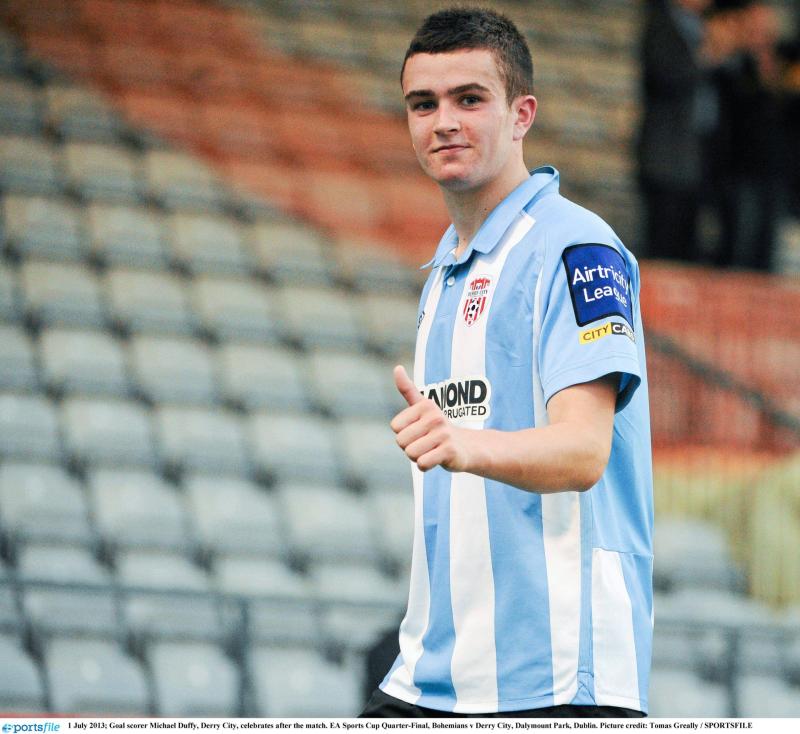 A young Michael Duffy after scoring two goals at Dalymount Park in 2013.

Michael Duffy will be a Derry City player again, and that fact is sure to stir memories of the last time he wore the famous red and white stripes.

Duffy first appeared under Declan Devine in 2012, but didn’t become a regular until a year later. It wasn’t until he played regularly under Peter Hutton however that Duffy hit the headlines, with 16 goals in the 2014 season, which earned him his move to Glasgow Celtic.

Today, we look back on Duffy’s best five moment in a Derry City shirt:

It was no surprise that Duffy began to make giant strides with the first team in 2013 and he soon made his mark with his first senior goal away at Shelbourne on June 8, the young striker firing the ball ferociously into the roof of the net past Niall Burdon to ensure a 1-0 victory at Tolka Park.

Derry City were struggling for consistency in the league, but cup success seemed plausible, even more so after Duffy’s brace at Dalymount Park sent the Candy Stripes into the League Cup semi-finals.

Aberystwyth lost 4-0 at the Brandywell in their first leg Europa League tie in July, but still claimed they were on a par with Derry City, with a red card the only reason they had lost so emphatically. Proving a point, Derry went out and hammered them 5-0 in the return leg, with Duffy scoring amidst a 5-0 win (9-0 on aggregate). The score line was also the highest ever recorded for an Irish side in European football history. Duffy and his team mates had made their point.

Despite the disappointment of Europa league elimination against Shakytor Soligorsk, July, 2014 ended on a high note for Derry City as they thrashed UCD 6-1 in Dublin. It was a game memorable for Michael Duffy’s first senior hat trick, three terrific and confident finishes which added to the growing reputation of the youngster.

The FAI Cup semi-final replay at the Brandywell in 2014 was hugely dramatic. After Rory Patterson had missed a late penalty, the game seemed to be headed to extra time until Duffy struck in the very last minute of the game. The forward reacted first to steer the loose ball past Barry Murphy and into the Rovers goal to send the Brandywell wild.