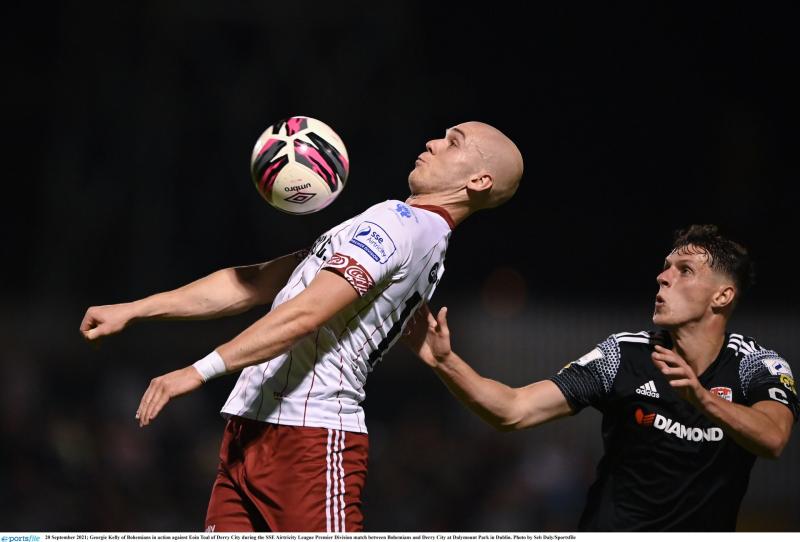 Georgie Kelly struck deep into added time to deny Derry City victory at the end of an incredible game at Dalymount Park.

It looked as if the Candystripes had won the game when James Akintunde put them ahead on 90 minutes, but it wasn’t to be for Ruaidhri Higgins’ players as Kelly struck a sensational equaliser.

This game had everything and it started brilliantly for Bohs who took the lead early on.

The home side found the net with their first real attack as Ross Tierney dummied a cross from the left and Kelly capitalised, laying it off to Liam Burt who absolutely smashed the ball into the top corner from 18 yards, past Nathan Gartside who had no chance.

Bohs, who gave up a half time lead in the loss to Derry at Dalymount back in April, pushed hard for the second goal and they brought another fine save from Gartside who managed to get a hand to Anto Breslin’s free kick on the hour.

That proved a crucial save as the visitors equalised just a minute later. Junior did well to find Jamie McGonigle in space on the left and the striker came inside, took on Andy Lyons, and curled the ball beautifully beyond the dive of Talbot into the top corner to make it 1-1.

Derry then stunned Dalymount Park by taking the lead with 15 minutes. A brilliant counter attack, led by substitute Will Fitzgerald, set Derry on their way, and it ended with McGonigle crossing for Junior, who bundled in from close range to make it 2-1.

It was a huge blow for Bohs, but they hit back brilliantly, equalising within minutes. Again Devoy brought a good save from Gartside, but the Bohs man didn’t give it up, and he crossed back into the area where Georgie Kelly headed past the City goalkeeper to bring the game level again.

The drama was only just beginning however as Derry looked to have won it on 90 minutes when James Akintunde raced through to lob Talbot for his first goal in 18 games to make it 3-2.

That should have been that, but deep into added time, one last desperate roll of the dice from Bohs saw Kelly control the ball on his chest and volley superbly past Gartside to rescue a point for his team at the end of an amazing game of football.