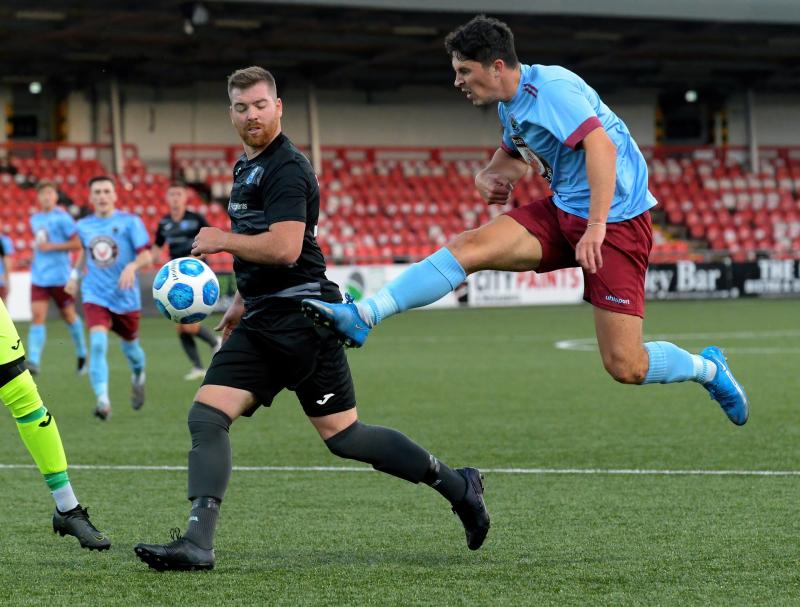 'Stute fell to a narrow defeat to HW Welders at the Brandywell.

It was a first defeat for Brian Donaghey as Institute boss as HW Welders won by the narrowest of margins at the Brandywell today.

'Stute, on the back of three successive victories, were hoping to break into the top six of the Championship, but a lack of cutting edge in front of goal ultimately cost them.

It was goalkeeper John Connolly who was the star for 'Stute, as he frustrated Welders time and gain, including a penalty save early on.

The drama began just 8 minutes in when the Welders were awarded a penalty, with referee Niall Gallagher penalising ‘Stute captain Aidan McCauley for handball from Mark Anderson’s corner.

Michael McLellan stepped up and saw his spot kick saved by John Connolly, but thought he had gotten away with it when the ball came right back to him and he smashed in the rebound. However, referee Gallagher this time ordered a retake with several players infringing in the area, and when McLellan tried again, Connolly saved again, and this time there was no rebound for the striker.

Welders broke the deadlock 10 minutes before the break but they needed a slice of fortune to do so. ‘Stute captain McCauley just failed to control the ball and it opened up a shooting opportunity for Craig Harris, who took aim from 25 yards, and his effort took enough of a deflection to end it over Connolly and into the top corner for 1-0.

Connolly produced a superb save to keep ‘Stute in the game on 68 minutes. The ball fell to Mark Anderson 25 yards from goal and his dipping volley looked bound for the top corner, until Connolly managed to get a hand on the ball to touch it onto the inside of the upright, with the ball just managing to stay out.

Time was running out for ‘Stute and they knew it, and they upped their efforts with Brogan’s cross almost leading to an equaliser via an own goal, with Callum Byers very fortunate that the ball bounced wide of the post rather than into the net.