A six-goal thriller at Festival Park 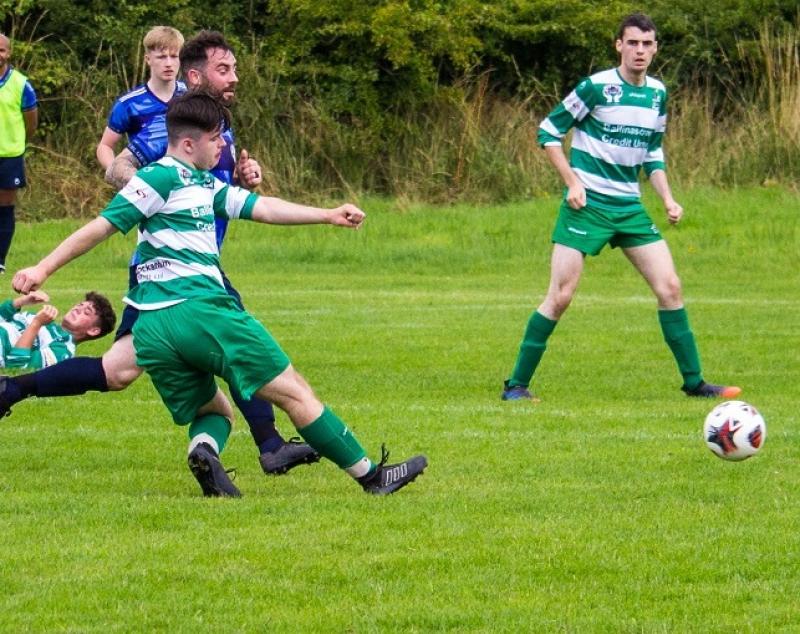 Enda McKee was in action for DC Reserves.

Festival Park, Upperlands was the setting this McKendry Fabrications League Cup tie that proved to be a great game of football between two teams that produced entertaining football throughout.

The home side got off to the better start, scoring early in a phase of the game where the Draperstown side were only beginning to settle into the contest after an anxious start.

Forced to regroup so early, the DC were picked off again by a sleek Upperlands attack who added a second goal with 18 minutes gone to go 2-0 ahead.

Just when Upperlands looked to have the upper hand and threatened to run away with the tie, Martin Mackle located his shooting boots to deliver a rocket of a free kick from 30 plus yards that left the Upperlands Keeper stranded and brought the score to 2-1.

Having been quiet on the left up that point, the goal seemed to galvanise both Mackle and the Draperstown team with Conor McCann and Mackle swapping forward and left wing positions, as the visitors slowly steadied the ship and worked hard to keep the tie at 2-1 at the half time mark with Upperlands remaining a constant threat.

Upperlands began the second half in determined mood to restore the two goal lead and did so scoring on the 50th minute mark, making it 3-1 to the home side.

With the Draperstown side’s midfield not dominating as it had in their previous fixture, the arrival of Callum White heralded a more energetic midfield and helped free up Ciaran Scullion and Enda McKee to terrific effect as Draperstown, undaunted by Upperlands third goal, began asking serious questions of the Upperlands side.

The visitors began to play more flowingly with Mackle and McCann beginning to dictate the game when in attack and drawing several fouls in the opposition half.  On the 60th minute this duo combined beautifully as Mackle tore up the right side and delivered to the dangerous McCann who controlled the cross magnificently and slotted the ball home for 3-2.  With no time to celebrate, Henry Heron keen for the restart, grabbed the ball from the net and sprinted to the centre circle to place it on the spot.

Sensing a result was within reach the visitors stepped up their game even further with McCann on the left causing havoc and Mackle proving nigh on unstoppable bursting through the middle.  The introduction of Paul McSorley at right wing quickly saw the Draperstown man score the equalizer from inside the Upperlands area on 70 minutes having latched on to a pass from Mackle and coolly sliding the ball into the opposition goal.

The remaining 20 minutes saw both team go at each other for the win.  With Heron dropping into right back, the experienced defensive line of Aaron McBride, John Higgins and Adrian McGuigan held solid and managed the game to its conclusion.  A point each proved to be a fair result and the Draperstown side should take pride in displaying character & resilience in fighting from a two goal deficit to earn a well-deserved draw.