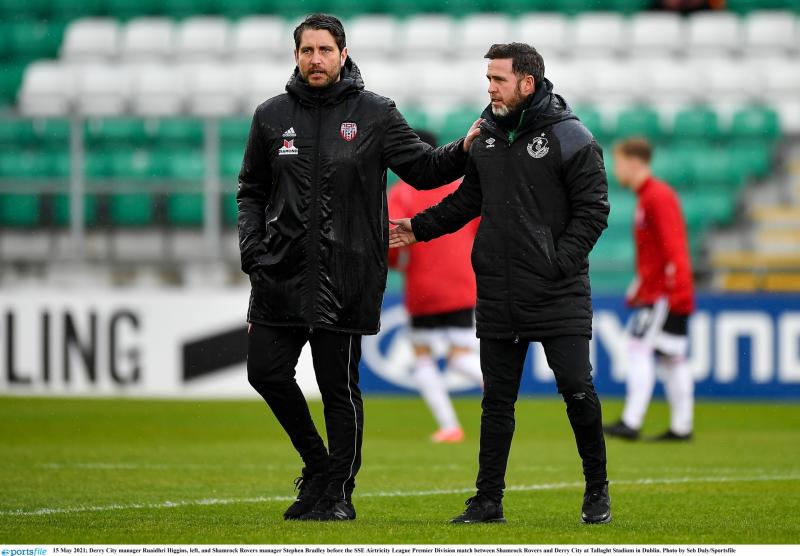 Ruaidhri Higgins believes that he will see a marker of how far his team has come in a short time when they face champions Shamrock Rovers at the Brandywell tonight.

It seems that all the attention at Derry City has been off the pitch in recent weeks, with contract renewals, the arrival of new players and potential departures from the Brandywell.

But on the pitch is the real test for this developing City side and Higgins, despite the 1-0 defeat to St. Patrick’s Athletic last week, believes he is learning more about his team with each passing game.

“I learn and they learn,” he said. “On reflection, when we watched the game back, even with eleven vs. eleven there was nothing in the game and I stand over what I said in terms of eleven vs. ten; that it’s a more accurate assessment of the game when it’s eleven vs. eleven.

“We had two good chances in the first half and on another day you score at least one of them and you get a point out of the game.

“In all the games that we’ve played, there’s not one game where we’ve been completely dominated and we can take pleasure in that, but we also have to sense when there’s an opportunity there for us and to go and grasp it and take it. It’s learning for me and it’s learning for the players and we’ll get better together and improve.

“The team has developed over the last couple of months and we’ve climbed a few places in the table which is progression itself. You want to develop and get better as quickly as possible, but it’s a process and our players are improving drastically and the team is improving, so I’m delighted with how the team is evolving and growing and I think over time we’ll grow into a very good team and be a match for anyone.”

City drew 1-1 with Rovers down in Tallaght back in May, the aftermath of which was dominated by talk of the champions’ controversial equaliser. The performance by Derry that day however has not been overlooked, especially by Higgins.

“We have to look at the game in Tallaght and take confidence from it,” he insisted. “Rovers were in good form at that point and they are in good form now as well, it we have to take really good confidence from that. I thought some of our passages of play on the big pitch in Tallaght was really, really good. Some of the football we played was really good and it’s good for the players to be able to relate to that game, and hopefully we’ll get more of the same come Friday night.

“They are the best team in the country and they are the champions and they put in a brilliant display against Bratislava and thoroughly deserved to win the match and were unlucky not to take it at least to extra time. We know that on any given day they are capable of putting teams away comfortably, but we just have to make sure it doesn’t happen to us. We’ll prepare accordingly and try and approach the game and why not be ambitious and try and win it?

This week City also discovered their opponents in the FAI Cup First Round with a trip to Drogheda United on the cards next weekend in the only all-Premiership tie of the round. Drogheda have never beaten Derry City in 5 meetings in the competition but Higgins knows that his team will be tested.