'It's a farewell to Patching... for now' 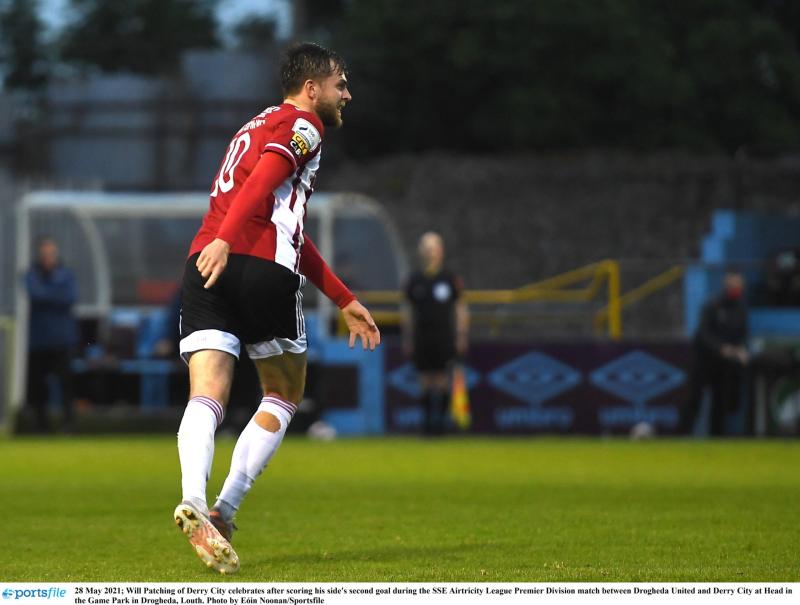 Will Patching has been a star at Derry City this season.

‘As things stand’, Will Patching will play his final game for Derry City tonight against Sligo Rovers.

Those are the words used by City boss Ruaidhri Higgins, who understands more than anyone just how important the midfielder has been to the club this season.

250 fans will be in attendance at the Brandywell tonight and it is likely that they will see Patching in a red and white shirt for the first, and last time, barring a dramatic change in circumstances in the coming days.

Patching’s loan deal with Dundalk expires at the end of this month, and with City set to visit Oriel Park on Friday, tonight is the only remaining game Patching can be a part of under the current deal. The 22-year-old has been a sensation at Derry this season, scoring 6 goals and assisting 6, the latest of which were two goals at Finn Park in the weekend victory over Finn Harps.

Higgins knows that all eyes will be on his star midfielder this evening.

“As it stands it’s the last time we will see him,” he said. “It’s his last game until I tell you any different. To be honest as it stands there’s nothing to report. It’s a farewell for now.”

The Patching issue aside, Derry City are now up to sixth place in the Premier Division following a fifth away win in six games, putting them in great stead ahead of tonight’s game against Sligo Rovers.

“We’re unbeaten in a while and it’s not just away games. Our last two home games have been against teams who are on top of their game so we have to take positives out of that; Bohemians are scoring freely and we put it up to them and St. Pat’s are winning games comfortably and we put it up to them as well. Hopefully it’s more of the same again and we can put in a really good display and pick up three points.”

Patching has scored four of Derry City’s last five goals and Higgins admits that he would like other players to start contributing.

“Of course we need people chipping in,” he acknowledged. “Cameron McJannett has chipped in and James Akintunde has chipped in with a couple so we know we’ve got players who can score goals. We can discuss Will not being here after Sligo but as it stands we play Sligo and we’ll do everything in our power to win the game.”

The Candystripes came through a real test in Ballybofey and Higgins was delighted with the qualities shown by his team in challenging circumstances.

“There were a couple of spells in the first half where we kept the ball really well,” he reflected. “Derby games are very intense, there are a lot of second balls to compete for so in that sense I was delighted because I knew it was going to be that type of game. We did show composure in key periods of the game and showed real maturity and game management in the second half.

“We have a lot of young players and you can see them growing week on week and their confidence growing and in turn performances get better. I’m delighted with them and hopefully we can have the same commitment levels against Sligo and hopefully put in a good attacking display as well.”

Sligo come into tonight’s game on the back of successive defeats, but the Bit O’Red have been in great form this season, with only goal difference keeping them off second place. It has been quite the turnaround in just a matter of months at the Showgrounds.

“I’m not surprised,” Higgins said. “Liam Buckley and his staff are really experienced and they have brought in good players who know how to score goals. They have done well, and I’m not surprised but it’s no surprise to me how well we are doing as well.”