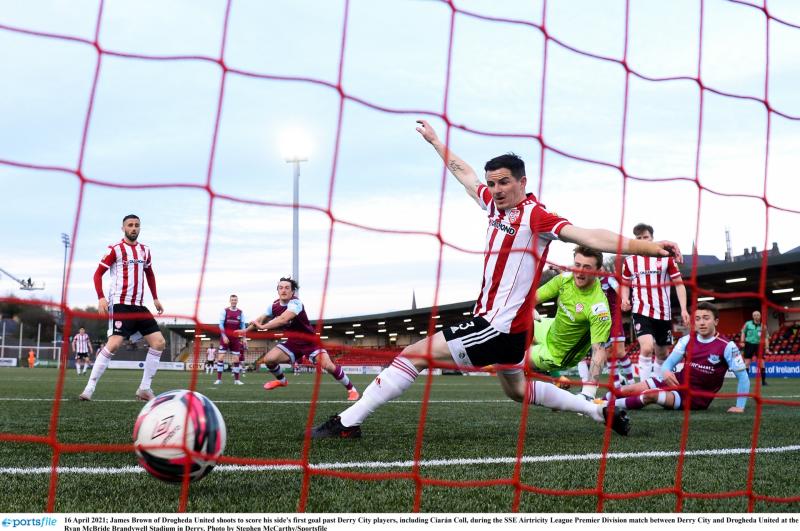 Derry City could only manage a draw against Drogheda.

Ronan Boyce scored his first senior goal but it was not enough for Derry City to pick up their first win of the season against Drogheda United.

Boyce scored just before half time as Derry hit back after falling behind to James Brown’s opener, but the home side struggled to create chances in a tense second half and a winner rarely looked likely.

Derry City have struggled to create chances and score goals so far this season, but they opened the Drogheda defence after 18 minutes and it was a chance they should have taken. Will Patching’s ball over the top saw Will Fitzgerald use his pace to get in behind, but he went for an ambitious header rather than going for the shot and Colin McCabe was able to save easily.

The hosts were asking all the questions in the opening quarter, but perhaps indicative of their season as a whole so far, they then conceded the first goal.

There was an element of luck about Drogheda’s opener as the ball ricocheted kindly for Dane Massey on the byline and his low ball across goal deflected into the path of James Brown, who swept the ball into the net to make it 1-0.

Derry City were not disheartened despite the scoreline and they finally got their rewards six minutes before the break. A corner kick was headed right back to Patching who got a second opportunity to cross, and he did that, switching onto his left foot before picking out 18-year-old Ronan Boyce who headed in his first senior goal from close range.

Drogheda came out determined after the break and they felt they should have had a penalty when Nathan Gartside challenged Mark Doyle after the City goalkeeper had parried a shot from Chris Lyons.

It was a much more even game in the second period but Drogheda came close on 65 minutes when Lyons exchanged passes with Brown and the goal scorer was in for a second, but he shot too close to Gartside who saved well.

Declan Devine changed it up immediately afterwards, sending on David Parkhouse and Joe Thomson in place of Brendan Barr and James Akintunde, but still the home side struggled to create.

Drogheda looked more likely in the closing stages and they had the chance to win it when two substitutes combined to open the Derry defence, Jordan Adeyemo teeing up Brandon Bermingham, but he fired into the side netting from 10 yards.