Derry City still waiting for first win of the season 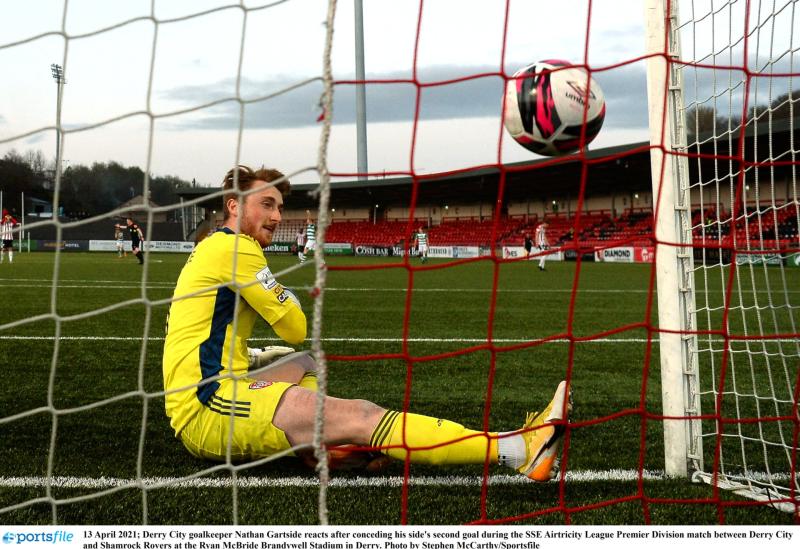 Nathan Gartside looks on after being caught from the halfway line by Graham Burke. Pic by Stephen McCarthy/ Sportsfile

A ‘Goal of the Season’ contender from Graham Burke helped condemn Derry City to a fourth successive defeat this season.

With Rovers 1-0 up through Rory Gaffney, Burke stunned everyone with an audacious effort from the halfway line, catching Nathan Gartside out of his goal, which left Derry with a mountain to climb at half time.

It proved to be enough as despite a valiant effort in the second effort, there was just too much for the Candystripes to do, and they continue to sit bottom of the Premier Division was they await their first point.

Declan Devine surprised many by handing youngsters Brendan Barr and Ronan Boyce their first senior starts, but City were well in the game and impressed in the first half hour.

The first heart-stopping moment in the game came on 15 minutes and it was a big moment for Derry City. Sean Hoare fell short in his attempt to pass back to his goalkeeper and David Parkhouse got to the ball ahead of Alan Mannus, prodding it past the goalkeeper and towards the empty net, only for the ball to hit the outside of the post and stay out.

Rovers paid heed to that warning and they created a chance themselves just two minutes later, a bit of panic in the City penalty area ending when Graham Burke could only shoot straight at Nathan Gartside who gathered the ball gratefully.

City were giving the champions as good as they were getting but the game swung in the visitors’ favour on 34 minutes with the opening goal. The ball came to Graham Burke in the area and his low shot towards the corner was brilliantly saved by Nathan Gartside, but Rory Gaffney latched onto the rebound and swung it int the empty net from the angle to make it 1-0.

Before City could respond, they found themselves 2-0 down, and it was a special goal from Graham Burke, who spotted goalkeeper Gartside off his line and placed the ball perfectly over his head from the halfway line, a spectacular strike from the Rovers man.

Derry were not lacking in effort in the second half but Rovers were always carrying a threat and Danny Mandroiu raced clear down the right before firing goalwards, and it needed a strong hand from Gartside to keep it out.

The first half goals proved decisive however and Rovers held on comfortably to pick up only their second win of the season. Derry City’s wait however, continues.