'We can't feel sorry for ourselves'

Captain Toal backs team to bounce back after Longford defeat 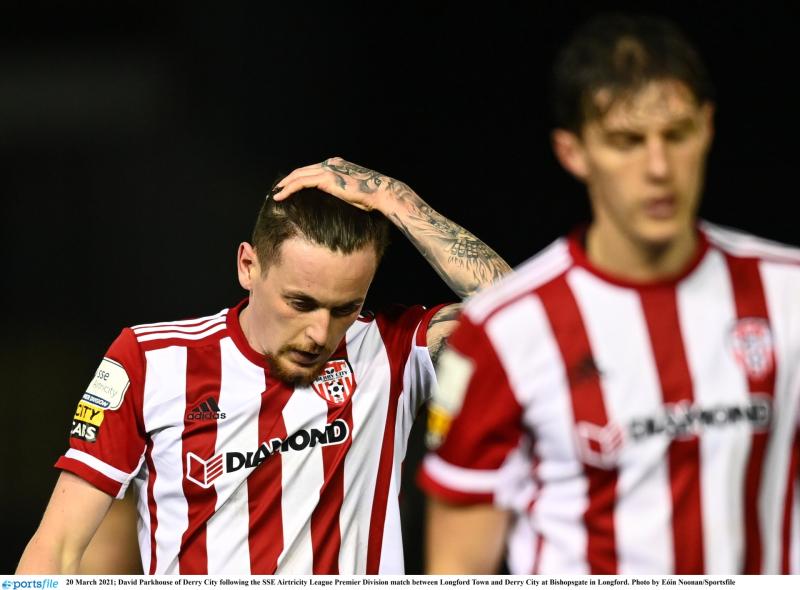 It may have been Eoin Toal’s first game as captain, but he knows this feeling all too well.

The 22-year-old has seen some dark days at Derry City, much worse then this in fact, so he is not going to panic over a poor performance and a poor result in the first game of a new season. That said, he still hates the feeling of losing and he admits that on this occasion, Derry City just weren’t good enough.

“We started off slowly and gave away a few silly goals,” he reflected.

“We knew that they were going to come out fast. They weren’t going to lie down to us and they got off to a really good start. I thought we had a few chances where we could have equalised but as the time went on, we weren’t making any clear-cut chances. It wasn’t to be today but hopefully it is in a few weeks’ time.”

This was Toal’s first game since being made permanent captain, and it did not go the way he had hoped in any sense.

“It wasn’t an ideal start but it isn’t about me,” he said. “It’s about the team, and we just need to stick together for the next game.

“We want to win every game we play because we are playing for Derry City and it is a massive, massive club and I’ve said this before, but we don’t go anywhere to get beat. We just started off slowly and there were a few silly mistakes.”

As an attacking force, City were almost non-existent against Longford, but Toal believes that luck did just not fall City’s way on a number of occasions, particularly from set-plays.

“We knew that maybe we could get a few goals from set-pieces because we’re a big enough side but it just didn’t fall for us tonight but on another night it just might,” he said.

With this week’s game against Shamrock Rovers set to be postponed due to Nathan Gartside’s international call-up, Derry have a two-week break before their next game. Toal believes they can can use that time to understand what went wrong in Longford.

“I wouldn’t say that we have a lot to work on but we have time to reflect and analyse the game and analyse where we went wrong and look forward to the next game,” he continued.

“We have two weeks before our next game so we have got to regroup and we have to stick together. The games are going to be coming thick and fast so we need to stick together. We know we are a new team and we’ll need time to come together but there are no real excuses – we started off slow and made two mistakes for the goals, and that should be better.”

There were a number of surprise results on the first weekend of Airtricity League action, and Toal knows that the mood can shift quickly with victory in the next game.

“There’s no time to feel sorry for ourselves,” he agreed.

“We’ll be back into training and we need to work together and stay together. There are going to be a lot of games coming up and the boys are going to be looking to get into the team and improve and that’s the main thing, to keep working hard.”