Devine impressed by midfielder's desire to wear the Candystripes again 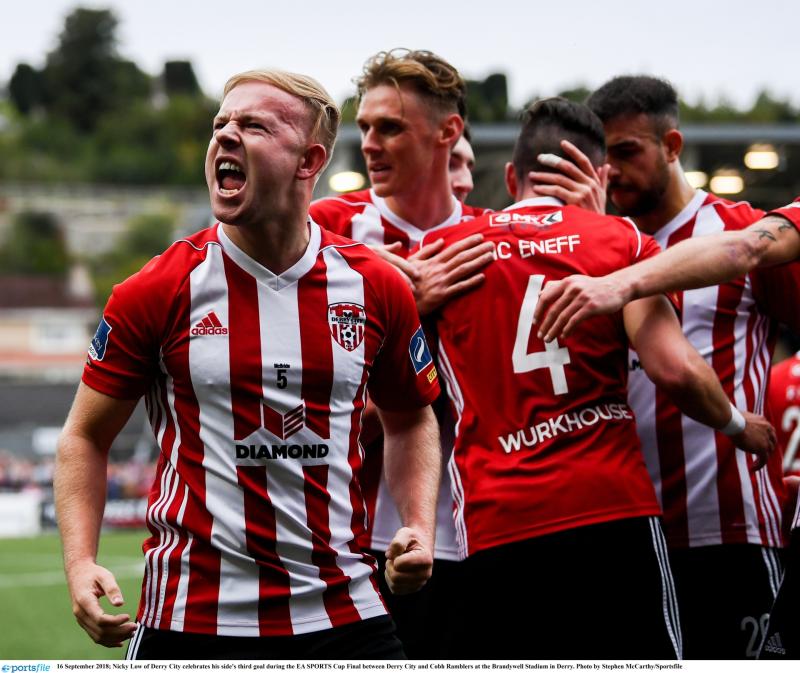 Nicky Low was close to a return to Derry City.

Nicky Low’s dream return to Derry City will not be happening after all, at least not in this transfer window.
The 29-year-old was due to travel to Derry this week to spend a few days in pre-season training with the City players ahead of a potential return to the club he made his mark at for two seasons.
Low was originally brought to the club by Kenny Shiels back in 2017 and went on to make 57 appearances, chipping in with 3 goals and 11 assists in that time.
The midfielder, who has been playing part time for East Stirlingshire in recent seasons, was keen to return to full time football, and especially keen to return to the Brandywell, where he was part of the side that won the EA Sports League Cup in 2018. Low has been in talks with City boss Declan Devine in recent weeks and it looked as if a deal might be agreed, but it has fallen through at the last minute.
“I have a lot of time for Nicky,” Devine said.
“I wasn’t here the last time he was here, but I spoke to him very closely over the last number of weeks. Nicky was very much up for coming over for a few days and seeing how it went, but it was a big commitment, and he’s just had a new born baby and it looks like Nicky is going to stay in Scotland for the time being.”
Nevertheless, Devine was struck by Low’s desire to wear the red and white shirt, and praised the midfielder for his passion to play for the club again.
“If everyone showed the willingness that Nicky Low showed to play for Derry, we’d be in a good place,” he continued. “That’s something that really stood out for me when I was talking to him, how much he wanted to come back and play at the Brandywell. We were both trying to make it work but for one reason or another on Nicky’s side, that’s not going to happen in this window anyway.”
Devine refused to rule out Low returning in the near future, acknowledging that he continued to be well thought of at the club.
“The book is closed for now, but the one thing I did do is I did a lot of homework on Nicky, on how he was perceived here and how we went about his job,” he stated.
“We certainly need at least one or two midfield players in, but what I will say is that Nicky is absolutely a credit to himself, and how much he loves the place was something that really appealed to me. It’s something that we’ll monitor and we’ll see going forward.”

‘Disrespectful’
Meanwhile, the Derry City boss has chosen to go off social media, as he focuses on building a squad that he wants for the forthcoming season.
Whilst acknowledging that the squad is not yet complete, he believes that opinions online have been ‘disrespectful’ to the players already at the club.
“The one thing I don’t want is too many in,” he said. “I’m actually off social media at the minute but people are telling me that there are people saying we need another six or seven players. I think it’s very disrespectful to the players that we have here.
“We did a bit of business early on in bringing Danny Lafferty and David Parkhouse to the club, keeping McJannett, and bringing Lupano and Akintunde back.
“We also have others like Toal, Malone and Thomson already on contracts so I think it’s a wee bit disrespectful to say we need six or seven, because we don’t.
“We need two or three and over the next few days we will have at least one in, with another two or three to come in the next week or so.”