Steelstown’s stories will stand the test of time, more than any medal could

Conan Doherty, Content Director with SportsJoe.ie, reflects on another heartbreaking defeat for his beloved Steelstown but says there is more to life than winning 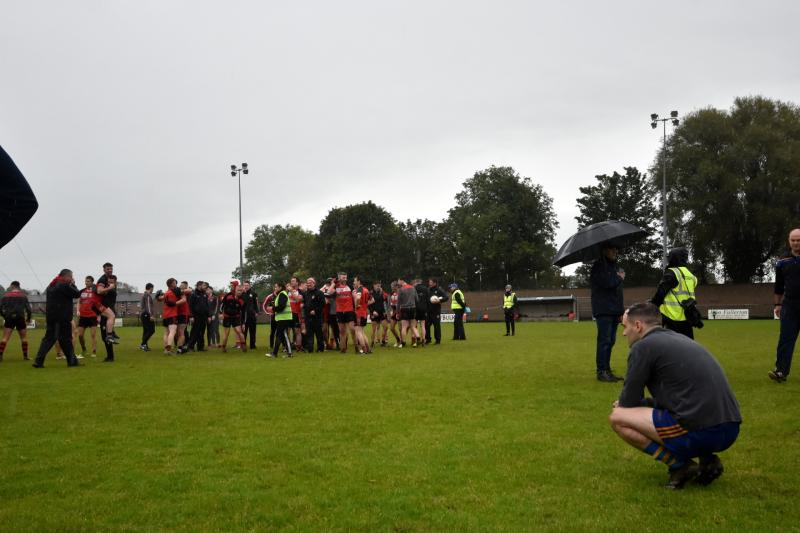 Remember Eamonn Burns’ point against Down in 1991?

He caught a ball at his ankles on the 65 and he was turned and gone before the defender could even think about reacting.

The Derry crowd in Armagh sounded like wild animals as the number 13 in white and red took three backs on a tour of the Athletic Grounds. One of the Down men tripped over the other one in the chaos as they tried to keep up with his searing pace headed for the right flank. Another one was culled by natural selection somewhere along the way and the third was put on his backside on the 21 as Burns sent him for a battered sausage with one cruel dummied shot off his right before using the same leg to curl over the most effortless score with the outside of his boot into the flailing limbs behind the goals.

Derry didn’t win that day. Down put them out of the championship and Down went on to win the All-Ireland.

Burns’ point? It remains untouched. An artifact of skill and audacity, perfectly preserved through the ages as a reminder to future generations what carefree abandon looks like. A memory as clean as his strike of the excitement and the pure joy his electrifying run brought thousands of Derry men and women that day.

In 2016, Neil Forester had the stand in Owenbeg rocking on its hinges when he burst the Castledawson net. There’s a picture of him in mid-air striking the ball with everything he had, leaping four or five feet as he connected and followed through.

When you turned around to look at the Brian Óg’s contingent, utter madness. Dermy and Heraghty, both crocked, falling over the seats. Eyes bulging out of Eoghan McGuigan. Angela McCarron hugging her son. Brian O’Connor letting an almighty ‘Steelstown’ chant out of him and waving both arms manically up and down to order every single soul to join him.

That night in Da Vincis, we mulled over another championship final loss and all the regret, the heartache, the fear that it might never come back around. And do you know what happened then? The sun came up the next day and the world kept turning. The club was still standing, the team went back to training together and the sound of Brian O’Connor’s passion ringing through your ears wasn’t going anywhere in a hurry.

And do you know what else? It did come back around and it will again but, in between, you get these moments. These timeless moments.

It might sound like loser talk, the sort of rubbish you only spout when you’re not too busy celebrating a championship win but the reality is that most teams and most players will never experience that high. That’s what makes it so special but it’s also what makes the ordinary moments in between more special.

Your goal every year might well be to win that bit of silverware at the end but building towards it is the only thing that makes anything worth it.

It’s the stories you have from training that endure. The impressions of the managers. The memories of 6 o’clock gym sessions. The desperation in the stands. The endless talk of what might be and what could’ve been.

I was on a train to Mayo one September and couldn’t believe how much you could feel the excitement in the air ahead of another foray into the breach. Genuinely, it was in the atmosphere, thick. Three different groups of strangers were all pensively talking about “Sunday” and none of them needed to ask what those two syllables meant. In a way, their chase for glory is the best thing about them. It gives them identity and it gives them purpose and, more than that, it fuses every one of them together in search for what they think they need.

To be honest, it won’t get any better if they ever got there. Right now, on the brink of it, everyone is pulling in the same direction. Everyone is consumed and duty-bound. Everyone is knitted together in a quest and every conversation and every dream is shared.

If they won it, it’d be amazing, sure. But the magic would be lost and, even if they’d trade that to win, you’d be giving up something. You’d be giving up that force that’s driving every thing and every one in the same beautiful way. You’d lose something from the air down there.

Recently, I spoke with Philly McMahon and he was recalling fondly the 2008 O’Byrne Cup final when Dublin scored two injury time goals to beat Longford by a point. The crowd invaded the pitch, the players were embracing on the steps of Parnell Park and it was a world away from what we know today. Philly misses those days, when Dublin were the nearly men, finding joy wherever they could. Would he trade his seven All-Ireland medals to have any of that back? Obviously not but the win and loss columns of Wikipedia pages don’t just fail to tell the whole story, they don’t tell any of the stories that will be passed down through folklore. Not in Mayo and not from the barren Dublin years and certainly not from the family life of club.

Steelstown might not have their senior men’s championship title yet but they have their stories and, by God, they’ll talk about them.

They’ll talk about Cahir McMonagle nutmegging a poor Drumsurn full back with the back of his heel as he spun his head and cut inside him. They’ll talk about Foley’s 45 when the game was in the balance and they’ll ask you which one.

They’ll wince at the thought of Gibby having litres of water thrown over his leg when he was lying in agony with a torn cruciate.

They’ll talk about the time O’Hea almost knocked Jacko out before a game by drilling a drop kick right off his face from five metres away – well, Jacko might not talk about it.

They’ll laugh at the infamous barbecue, the yoga sessions, the poker disputes.

They’ll talk about the time 16 men went to Kilrea and held off a siege to steal a victory against every odd in the pouring rain. A first half Dan Jackson hat-trick followed by 15 players hanging on with everything they had to win by a point. And guess what? The team was relegated from Division One that year and the talk remains. What ultimately happened doesn’t take away that day, or those feelings, or that story.

They’ll talk about the night Fran started an almighty brawl in Limavady and forced a group of boys to become men as he laughed with blood on his face after unleashing hell.

They’ll talk about the sprints, the crisis meetings, the away trips, the weddings.

The end goal is clear but building towards it is all that really matters. All this stuff that happens in between finals is what makes the GAA and the little empires we inhabit and build up around ourselves. They’re what make the memories.

Chances might come and go, players who deserved more might grow too old, but those stories will never disappear. Another season and the buzz and bonds that are created when you start the grind again isn’t just a new chance to win something, it’s a chance to capture more of those moments - the only things that really matter when all is said and done.

But, Lord almighty it would be nice to win one. Just once.