“I'm starting to be really concerned that we don't have the character but we need to dust ourselves down - we're in a dogfight now." 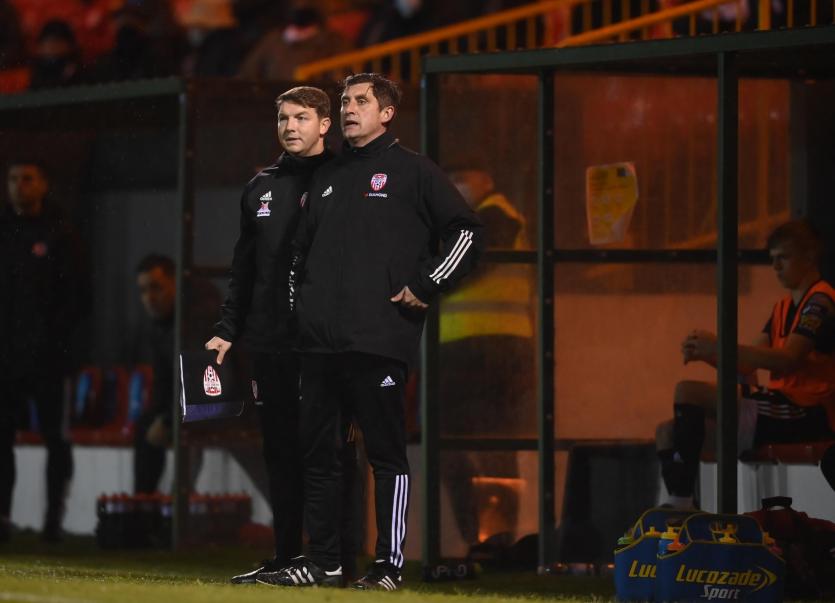 Derry are hoping for a turn in their fortunes tonight against Waterford.

Declan Devine is set to ring the changes for tonight's must-win game against Waterford, after successive league defeats put Derry City in a serious situation near the foot of the Premier Division.

Although the manager won't countenance talk of relegation, it is a word that is gnawing at the forefront of City fans' minds this week, with their team just four points off Cork City in last place.

Just two wins in nine games since the restart has dumped the Candystripes into a position where, unless results improve quickly, they could been in real trouble, with only five league games remaining, two of which are against Dundalk and Shamrock Rovers.

Devine's gamble of playing the same team which lost so cruelly at Bohemians at Dalymount Park failed, with the players unable to match or improve on their performance against Sligo Rovers, who scored the winning goal with just three minutes remaining.

"I'm sick saying it's not good enough,” an angry Devine said afterwards. “You have to question the players attitude and their application.

“It's not acceptable. I keep saying this. It's sounds repetitive. When you come to Sligo you have to fight, but we didn't fight, we didn't play. We had a chance, we hit the post before they scored.

“When you play for this football club, you have to have desire, hunger, passion, effort and energy. It was all lacking to be honest.”

With performances not improving, and the situation becoming increasingly concerning at the foot of the table, Devine could now be tempted to try his luck with players who have missed out in recent weeks.

Midfielder Gerardo Bruna could come into contention, while Ally Gilchrist is also an option having trained well this week. Conor Clifford, Colm Horgan and Ciaron Harkin are all players who will be keen to prove they are worth a starting position also.

“We had players sitting in the stand at Sligo who will definitely serve up better than we witnessed,” he said. “Unfortunately we could only make three subs in the second half.

“It was a scrappy and horrendous game but again we're the ones who come out on the wrong side of it and that's not good enough.

“Our performance in the first half was not anything that respects our football club. I'm at the stage now where I'm really disgusted with the performance we put out. The goal we gave away with three minutes to go, it was carbon copy, we're going to sleep again.

“We may get ready now for a huge game on Friday and we have to make sure that we get something from the match.”

Victory over Waterford is now a must, with games running out quickly and Devine is hoping that the players look within themselves for answers, because, as he suggests, they are not forthcoming at present.

"We have asked the players many times and I'm getting blank expressions,” Devine continued.

“I'm starting to be really concerned that we don't have the character but we need to dust ourselves down - we're in a dogfight now.

“We need to start picking up points very quickly. We have a home game (against Waterford) and we need a reaction. That wasn't good enough.”

“I'm looking at getting players on the pitch on Friday who are going to apply themselves better than they did here, players who have a bit more respect for the football club, a bit more hunger to see out games when it's not going for you.”