The current Irish Young Driver of the Year finished 17th 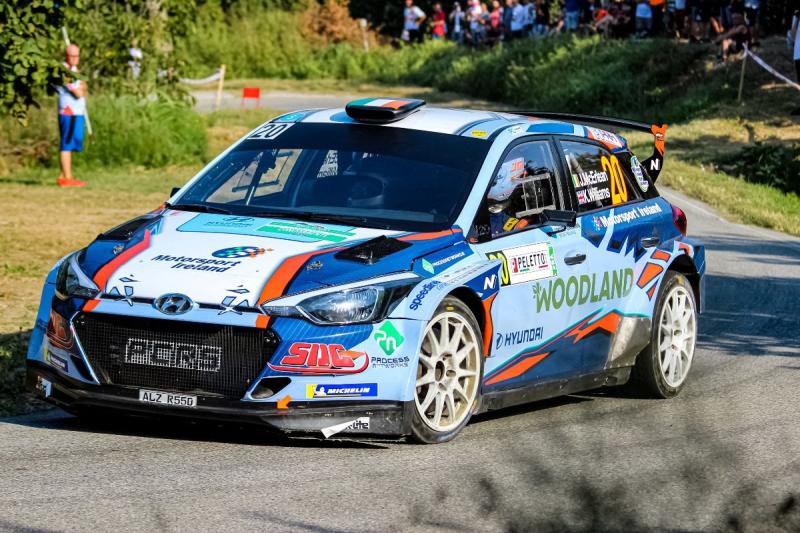 Kilrea's Josh McErlean proved he had not lost any of his pre-lockdown pace, by securing an impressive 17th overall at last weekend’s Rally di Alba in Italy, behind the wheel of his Motorsport Ireland Rally Academy supported Hyundai i20 R5.

Regularly setting top 15 times throughout the event, the 21-year-old and co-driver Keaton Williams soon got to grips with the unique Italian roads, to complete their first event since March’s Covid-19 lockdown halted all rallying in Ireland and the UK.

The duo also upheld Irish honours at the event, with the Motorsport Ireland Rally Academy entering two drivers on the event which saw no less than 16 Hyundai i20 R5’s tackle the event, joining World Rally Championship stars Ott Tänak and Thierry Neuville in their i20 Coupe WRC’s.

Like most aspiring young rally drivers, McErlean’s season was decimated by the Covid-19 outbreak and had his 2020 plans quashed by the cancellation of the British Rally Championship earlier in the year.

After a tricky opening round of the BRC in Wales in which the 2019 Junior BRC champion impressed onlookers with a string of top five times, he was eager to return to the stages and thanks to the help of the Motorsport Ireland Rally Academy and Hyundai Motorsport Customer Racing, a deal was done to head to Italy for Rally di Alba.

Although McErlean, the current Billy Coleman Award winner, had technically competed in Italy before, at the Monza Rally Show, the event would mark his first closed road event in the Hyundai outside of Ireland and with over 100 kilometers of special stages ahead, McErlean would need to focus all his energy on the return to competitive action.

A loop of three stages would be repeated three times and whilst becoming more familiar with the stages would inevitably assist McErlean, the loose gravel and rocks pulled onto the stages with each pass offered an additional hazard, especially towards the closing stages of the rally.

After a positive pre-event Shakedown on Saturday, McErlean was eager to settle into a comfortable rhythm on the stages in his Michelin shod Hyundai and opened his account with an impressive 16th overall stage time on the first test of the event with many experienced Italian crews behind.

His form continued throughout the opening loop to land 17th overall after three stages. Fourteenth fastest on the fourth counter was a highlight and an indication of just how well McErlean was bedding into the Italian roads, climbing one place to 16th in the process. Sadly, a technical issue on the fifth stage meant he and Williams would have to carry out roadside repairs to the i20 R5 before heading into the sixth test.

Those repairs would eat into his road section time, handing him an unfortunate 50-second penalty before he was able to attempt the stage. Luckily McErlean was able to nurse the i20 back to service where the Philip Case Rallysport team worked against the clock to get the Hyundai back to full health.

A mature drive over the final three stages saw McErlean further cement his position to return to Alba with an impressive top twenty result.

“I’m delighted to have reached the finish today and although it wasn’t entirely trouble-free, I really enjoyed the experience, it was a real honour to compete on such a fantastic occasion and with an amazing atmosphere,” said McErlean.

“We came here with a clear goal to get experience and build the pace throughout the rally and I feel we did just that. Analysing the times and considering the lack of experience in Italy it was very much mission accomplished throughout the weekend and without the time penalty, the result would have been as good as I could wish for.

I’m happy with the way both Keaton and I managed the situation we found ourselves in and got the job done on the way to the sixth test to enable us to carry on. Resilience and thinking on your feet are a key focus of the Motorsport Rally Academy so we were very able to put that into practice.

The pace this weekend shows that I`m heading very much in the right direction and I am eager to make more plans to take that forward during the remainder of the season. I’d like to thank all our backers, Sean McHugh and John Coyne from the MI Rally Academy, Andrew Johns from Hyundai Motorsport Customer Racing and Tim Hoare from Michelin for all their invaluable support once again.”