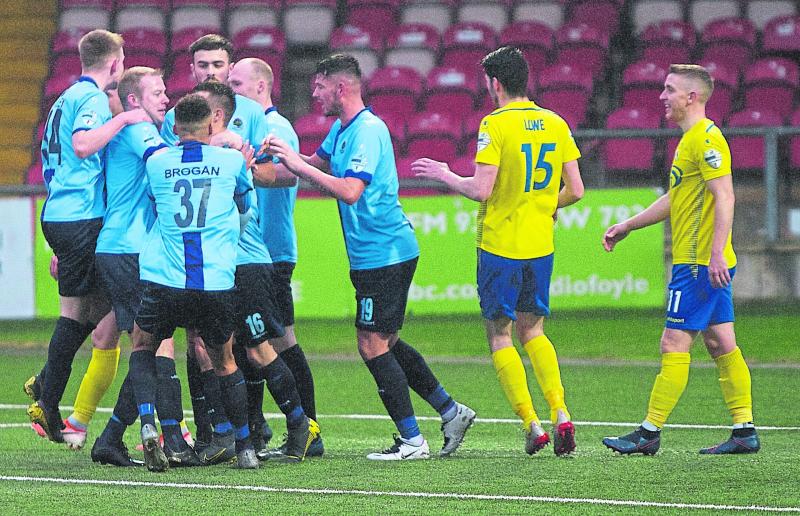 WHAT MIGHT HAVE BEEN... Institute players celebrate an equaliser in their Irish Cup tie against Dungannon Swifts at the Ryan McBride Brandywell Stadium on Saturday. Photo; nwpresspics

Institute were left devastated after producing a brave second half display only to lose out to a 94th minute winner at the end of an absorbing Irish Cup tie at the Brandywell.
It is Glenavon next for Sean Connor’s team, and whilst the league is now the priority, it will be hard to shake off the disappointment of this one as ‘Stute fought back from behind on two occasions only to shoot themselves in the foot yet again.
It is the latest kick in the teeth for Connor and his players after a difficult December, and moments like the error from Graham Crown which led to Swifts’ second goal, continue to go against the Blues, who have enough of a challenge without shooting themselves in the foot continuously.
That said, there were signs of life here for ‘Stute, and going into this week’s game against Glenavon they can at least build on that, the second half in particular showing that there is still some fight left in this team.

Early goal again
After the disappointing first half display against Carrick at the Brandywell just a week earlier, Sean Connor would have wanted a better start from his team at home, but cup goalkeeper Paul Wells was picking the ball out of his net after just five minutes. The ‘Stute players were enraged that an apparent dive by a Dungannon player in the build-up went unpunished but referee Steven Gregg played on, and Chris Lowe was able to cross into the six-yard box where Rhys Campbell, who only started due to an injury to Oisin Smyth in the warm up, tapped in from close range.
The ill feeling from the last meeting between these two teams, which saw several red cards after the final whistle, was still evident, and after Niall Grace was cautioned for a challenge on Seanan Clucas, the Swifts captain theatrically went down just outside the ‘Stute penalty area, and was surprisingly awarded a free kick. Douglas Wilson took the kick left-footed and almost found the bottom corner, only for Wells to push it behind for a corner.
There was still absolutely no threat from ‘Stute to talk of and it would have been 2-0 if not for an unbelievable save from Wells on 27 minutes. Goal scorer Campbell could not be stopped as he ran the length of the pitch down the left wing, all the way into the ‘Stute penalty area, where he put the ball at the foot of Caolan McAleer who must have thought a goal was his until Wells somehow sprang across his goal to keep the ball out. It was a vital save from the ‘Stute goalkeeper.
‘Stute somehow hung on and just before the half time break they got the goal they desperately needed. Oran Brogan won a free kick wide on the right just inside the Swifts half, and Cormac Burke’s curling delivery into the heart of the penalty area eluded everyone, except Gareth Brown who headed home from close range following hesitation by goalkeeper Conor Byrne. It was just what Connor and his players needed after a one-sided and tension-filled first half.

Half Time 1-1
‘Stute were a different team entirely at the start of the second half, playing with an enthusiasm and a determination that was completely absent in the first period. Joe McCready for one was getting himself into the game as ‘Stute looked dangerous and were the better team for the first time in the game.
That said, it still took until the hour mark before they tested Byrne again, and the Swifts goalkeeper was very nearly caught by surprise, as Alex Pomeroy tried his luck from 20 yards, a half volley on the turn by Pomeroy flying towards the bottom corner until the goalkeeper touched it behind for a corner.
From that corner, ‘Stute were nearly caught out themselves as Swifts broke three on one, but Ryan Strain hesitated just a fraction too long, allowing numbers to get back, and when he did get the cross in, McAleer shot into the side netting and ‘Stute survived.
The game was now end to end and McCready was left berating himself after he latched onto a superb ball through the heart of midfield by Graham Crown, but with a clear run on goal his touch deserted him and Byrne was able to come off his line to claim the ball.
This was now a very competitive cup tie which both teams believed they could win, but disaster struck ‘Stute and in particular Graham Crown on 73 minutes. Under pressure from two Swifts players, Crown attempted to head the ball back to his goalkeeper, but his attempt fell too short and Ben Gallagher, just on as a substitute simply lifted it over the head of the stranded Wells into the net to make it 2-1.
It was hard to take for the home side, especially given their second half display, but they came again and nearly equalised within minutes, the impressive McCready picking out a cross for Pomeroy, but the youngster could not get enough on his header and glanced it well off target.
To their immense credit, ‘Stute kept coming and they brought it level again after Burke worked his way into the penalty area, held off two challenges and curled the ball brilliantly beyond Byrne and into the top corner to make it 2-2 much to the delight of his manager and team mates.
The game was headed to extra time but ‘Stute were left devastated as Michael Carvill got away with 94 minutes on the clock and kept his head to curl the ball beyond Wells and into the net to win the game for Swifts in the most dramatic of fashions.
Connor kept his players in the changing rooms for half an hour after the game, such was his annoyance with his team's exit from the cup.