David Parkhouse has paid tribute to Declan Devine as he prepares for the next chapter in his career after a memorable year at Derry City. 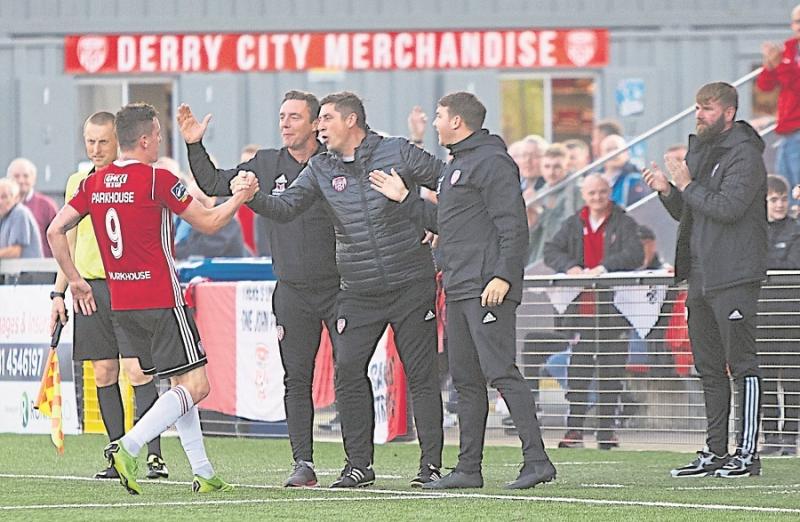 David Parkhouse has paid tribute to Declan Devine as he prepares for the next chapter in his career after a memorable year at Derry City.
The striker, who turned 20 just before the final league game of the season against Finn Harps last week, ended his first year in senior football as the Candystripes' top scorer with 19 goals in all competitions.
From his goal-scoring debut against UCD back in February to celebrating European qualification after the 4-0 win against Harps, Parkhouse has led the line time and time again, making 39 appearances in all for his home town team.
It is a task that many teenagers would not have been trusted with, but Devine kept faith with Parkhouse, as he did with all his players, resulting in a significant transformation in the club as a whole, as witnessed last Friday when a packed Brandywell celebrated European qualification with the players.
For Parkhouse, it was the perfect end to a brilliant year, made possible, he insists by Devine and his staff.
“I know fully what went on last year because I’m a Derry supporter too never mind being a player this season,” he said.
“I kept up to date with them last year and it wasn’t great, but Decky has been brilliant; not just him but all the staff as well, that goes right through to Dodie and Emma up in the office as well.
“It’s a good turnaround from what happened last year and it goes to show what Decky can do as a manager. He chose the players for this year and everyone dug in well and got the job done.”
Parkhouse spent the season at his home town club on loan from parent club Sheffield United, and whilst a return to the Blades is still an option, Parkhouse will have no shortage of suitors across the water due to his performances in the red and white shirt.
“I never expected it to go like this, from the player I was against UCD to Finn Harps. I’ve come on leaps and bounds and I’ve gained a lot of experience,” he explained.
“That was the ultimate goal when I came here. I wanted to get goals and get games and get experience and I’ve got it.
“I’ll always remember this to my dying moments. It’s my first senior season and I’ve really succeeded in it. I could not have asked for a better start in my first senior season and hopefully I can kick on now.
“I’m confident in myself now, I’ve learned a lot about myself and I think I‘ve shown everybody else that I’ve got what it takes to develop on a senior stage.”
Farewell
Parkhouse will now take a break before he decides his next move but he appeared to say goodbye to Derry City with an Instagram post earlier this week.
It read: “Derry gave me the opportunity to showcase myself as a player as well as making myself a better person.
“It has been an emotional year but the reward at the end of it was getting into Europe and I’m glad I helped that along the way.
“I wish the boys and the staff and everyone at the club the very best going forward because you have been amazing to me.
“I will always have a soft spot for Derry City because that’s where it all began and long may it continue.
“Who knows where I will end up going forward but for now it’s time for a break and to see where the next challenge lays.”