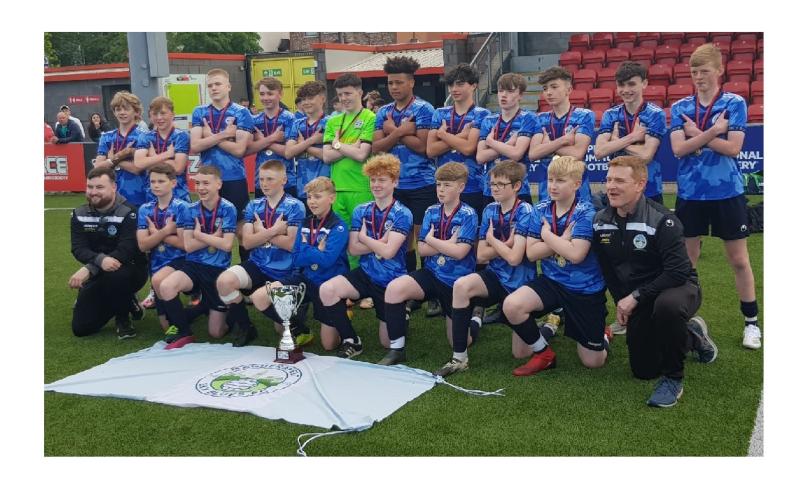 The boys were up against Immaculata FC, who were looking to make it three cup wins in a row and had some excellent footballers in their ranks.

After an exciting game, the Immaculata coaches displayed great sportsmanship in defeat.

The first half was a tight and tense affair, with Sky Blues twice taking the lead only to be pegged back.

Eamon Young scored a fantastic solo goal with a curling effort in the second minute and Rory Neeson scored an excellent free kick midway through the half. However, Immaculata proved a tough nut to crack and the half ended 2-2.

The second half saw the Sky Blues score a further three goals without reply and saw a commanding performance from our goalkeeper Cayden 'George; Murray.

Jude Beattie scored Magherafelt's third goal from close range and it was nothing more than he deserved with another lung busting display.

After more brilliant work from Eamon Young down the wing, he left defenders in his wake and cut the ball back to give striker Ewan McGrath an easy tap-in.

Eventually the Sky Blues gave themselves a three-goal cushion after Young was fouled in the box and earned a penalty. This came after some great football involving Eoin Scullion, Fearghal Walls, Rory Neeson and Conn McAllister.

Up stepped a composed McGrath and it was now 5-2 after a cool penalty.

The togetherness of this young team and squad was there for all to see. Their discipline was praised by the match officials and their excellent football was praised by all concerned.

Ewan McLaverty, Dylan McLarnon, Turlough Cartin and Eoin Scullion had a great game at the back.

Top scorer Ewan McGrath got another brace in a terrific performance.

Squads mean everything in football and all our subs played a vital role in helping us achieve this double and we need everyone to be successful.

Last but by no means least, star player Cathair Kerr deserves a special mention. He was unavailable for selection due to a broken wrist.

This was a fantastic achievement by the 2007 Youths. The club's Colts team have their own cup final to look forward to on Saturday, July 3.