Sky Blues come back to draw with Dunloy 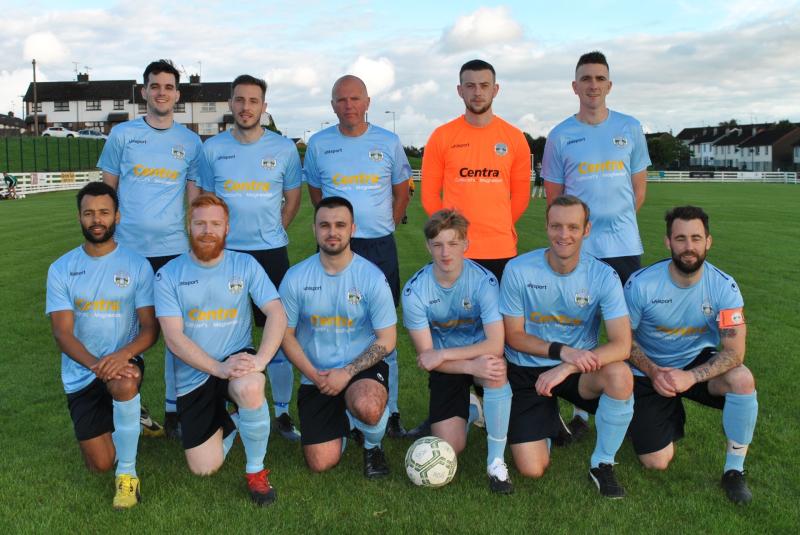 The Magherafelt Sky Blues team who drew with Dunloy

On a great night for a game, this competitive fixture ended up with a 2-2
scoreline.

Dunloy took the lead shortly before half-time when McFerran scored from close range.

The visitors increased their lead 10 minutes into the 2nd half, when Fitzpatrick scored with a well-placed penalty to put Dunloy firmly in control.

The Sky Blues were battling hard and got their reward when young Harrison pulled one back.

With time running, out the Blues equalised after a long kick out from Cassidy in goals, Monaghan latched onto it and calmly rounded the Dunloy 'keeper to draw the sides level.

Magherafelt could have snatched a late winner when Monaghan again almost got in on goal only for a stray pass to deny his opportunity.

On a night when it was more about the team performance than individuals, the influential Liam Martin and Callum Campbell both deserve a mention.

“I'm delighted with the result and the performance of the team,” said the Sky Blues boss David Kelly after the game.

“The experienced players guided the younger lads through the game as Dunloy are a quality side. Each player brought something that contributed to that performance tonight.”

Next up for the Blues is a home fixture on Saturday, September 8 against Ballymena side Northend.