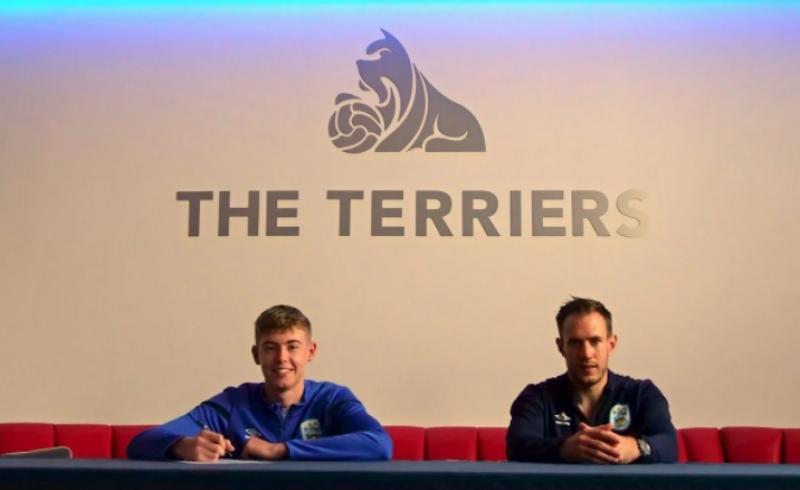 He isn't the only Northern Ireland player to join the Terriers.  Cliftonville's Northern Ireland U16 player Brodie Spencer has also been snapped up by the club.  All nine newcomers visited the club's Canalside training complex this week.

Falls also had trials at Chelsea Manchester United and Aberdeen plus there was interest from other top English and Scottish clubs before he decided on a move to Huddersfield.

Conor, who can play on either wing, played for Derry in the Super Cup last year and scored against Arsenal.  He has scored over 300 goals at the top level in Northern Ireland and has three international caps.

“I am absolutely delighted to be joining Huddersfield Town FC on a three-year contract," Conor commented in a statement to the County Derry Post.

"It’s a dream come true for me but I know the hard work begins and I can’t wait to get started. Huddersfield offered a deal after Emyr Humphreys and Leigh Bromby watched me play for Northern Ireland v Poland and playing in the Victory Shield in Wales at the end of 2019.

"They invited me over for a trial in December and the club felt the perfect fit for me so the decision was easy . They are a great club with a brilliant academy from which I will improve and learn so much and it’s a brilliant opportunity for me.

"I would like to thank all the coaches and staff at Cookstown Youth FC and Dungannon United Youth and my coach Jason Lindsay at Glentoran FC for helping in my development in football plus my family for their brilliant support .

Club NI has been a massive help and influence in helping me progress and working with some excellent coaches such as Gerard Lyttle and Jim Magilton. I’ve been on so many trips playing abroad with Club NI which has been great in conditioning me to being away from home.“

The move didn't come as any surprise to his coach at St Mary's Magherafelt.

"Having had the opportunity to coach Conor Falls for the last two years, it has come as absolutely no surprise that he has been offered a pro contract with Huddersfield Town," commented his school coach Conor McAuley.

"Conor is a class act, capable of playing on the wing or up front. He is strong, fast and athletic, and possesses an excellent footballing brain. Conor was fundamental in helping St Mary's reach the Northern Ireland U16 plate cup final two years in a row, scoring nine goals along the way.

"Conor has a great attitude towards training and everyone in St Mary's are both extremely proud and happy that his hard work and dedication has paid off. We wish him all the success for his future career and look forward to watching him help Huddersfield Town return to the Premier League."

Falls just completed his Year 12 studies and follows two St Pius Magherafelt pupils who have headed over the water in the last year.

St Mary's Magherafelt pupil Terry Devlin, who played for the 'Convent' in last season's Rannafast final, also had a trial with the Hammers and is back playing with Dungannon Swifts.