Toal 'Hoban' to learn from the best 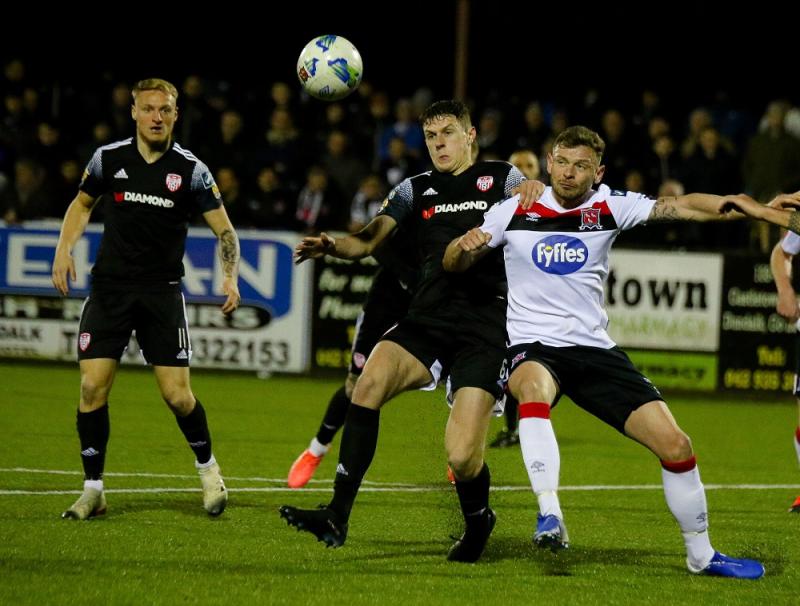 KEPT BUSY... Derry City defender Eoin Toal was in the thick of it against Dundalk at the weekend. Photo: Kevin Moore

Eoin Toal's development as a centre-half can be measured in his ongoing battle with Dundalk's Pat Hoban, with Friday night showing the rising experience and confidence of the Derry City defender.
It is now four games against Toal without a goal for Hoban, arguably the league's most dangerous striker, whose ability to hold up play as well as finish has been him key to Dundalk's success in recent years.
Toal himself has been on the end of some difficult days against Hoban and Dundalk since coming to the Brandywell, but it was evident last year that the 21-year old was not afraid of standing up to the striker, and that fascinating battle continued on Friday with Toal again holding his own.
“I'm just training every day and learning from the boys beside me,” he explained.
“They are tough centre-halves, the likes of Darren Cole, Ally Gilchrist, Mark McChrystal – those boys know the drill. Hoban is a top player and the more games you play you get more experience playing against him but he's a very good player and we're unlucky not to come away with the win tonight.”
Toal was as disappointed as anyone that the Derry defence was breached in the way it was, insisting that the visitors deserved a point at least.
“I thought the boys dug in well and defended well and another day we would have come out of here with a result,” he said.
“I thought the new players were brilliant, I thought every player was brilliant. Oriel is always a tough place to go but I thought the boys kept their shape brilliantly throughout the game. We know the way that Dundalk are with corners and we talked about it during the week. It's just unlucky, there's not much more you can say. I thought all the boys were excellent tonight and we just have to stay positive, that's the main thing.
“We had chances too and another day we take one, but we have to stay positive because we have a big game on Friday against our rivals Finn Harps.”
Desperate
Toal, like his manager and the City fans, is desperate to end the winless run against Dundalk, but on this occasion that recent frustration continued with yet another narrow defeat to the champions.
“Every man gave everything and you can't fault the commitment,” Toal continued.
“That's the way it is here. The boys were brilliant and unfortunately we didn't get that luck. Maybe if we had got one of those nicks in the box going our way it would have been good but on another night they go in and we just have to deal with the defeat. We don't accept defeats but at the end of the day there are a lot more games left so we just have to stay positive.”
It is now onto the first home game of the season against Finn Harps with Toal hoping that he and his team mates can get off the mark for the new season.
“We definitely want to get the first win for the fans,” he said.
“The Brandywell is our home pitch. We're not going to dwell on this defeat,. We're looking to the game on Friday and we're going to take each game as it comes and hopefully we can stay positive and get the win on Friday.
“Harps is always going to be a tough game because of the rivalry between the two clubs but they will definitely be good so we just have to be on our game and hopefully we can get the three points.”