A decade of silverware, heartache and hope for Derry City - Top 10 Moments

We look back on ten moments which, whether exceptional or heart-breaking, help fans reflect on just why this is the team they love so well 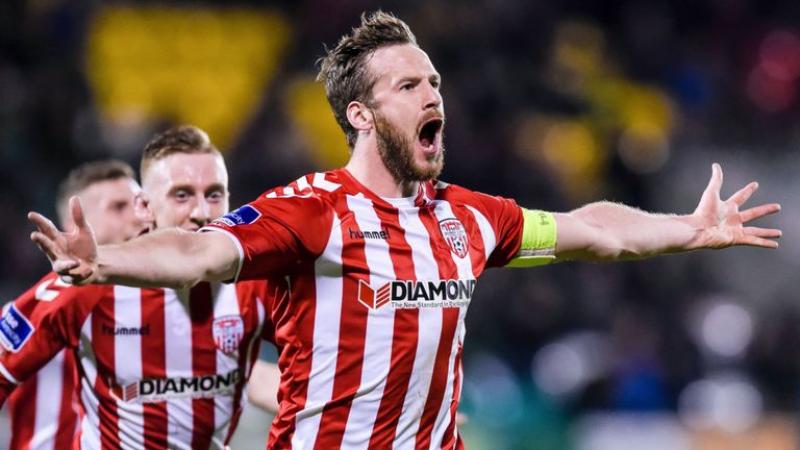 As every Derry City fan can attest to, following their club is never, ever boring.

There is just never a dull moment when it comes to the Candystripes and as another chapter in the club’s history comes to a close, they can look back on another decade of extreme highs and unimaginable lows.

Yet each experience, each memory, goes to solidify their passion for the club they love, and ahead of what City fans hope will be the roaring twenties, we look back on ten moments which, whether exceptional or heart-breaking, help fans reflect on just why this is the team they love so well. 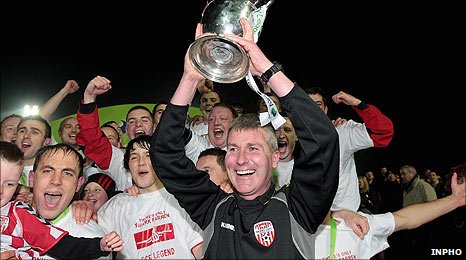 WE DID IT…Winning the First Division title.

The club was on its knees as the last decade came to an end, relegated from the Premier Division due to financial irregularities. A lifeline offered by the FAI however gave the club a chance of a rebirth and under a new chairman and board of directors, the club started again in the First Division.

Crucially, one of the few who stayed was Stephen Kenny who had arguably his biggest challenge ahead of him.
Senior players such as Kevin Deery stayed, as did Eddie McCallion, Barry Molloy, Mark Farren and Gerard Doherty giving a strong spine to the new look team. But the most notable aspect of this new team were the youngsters. James McClean, Shane McEleney, David McDaid, Patrick McEleney, Thomas McBride, Ruairi Harkin, and Darren Cassidy made up most of the remaining numbers.

What followed was a magical season as City stormed back to the Premier Division on the basis of a squad which, Marl Farren aside, were all born within six miles of the Brandywell. 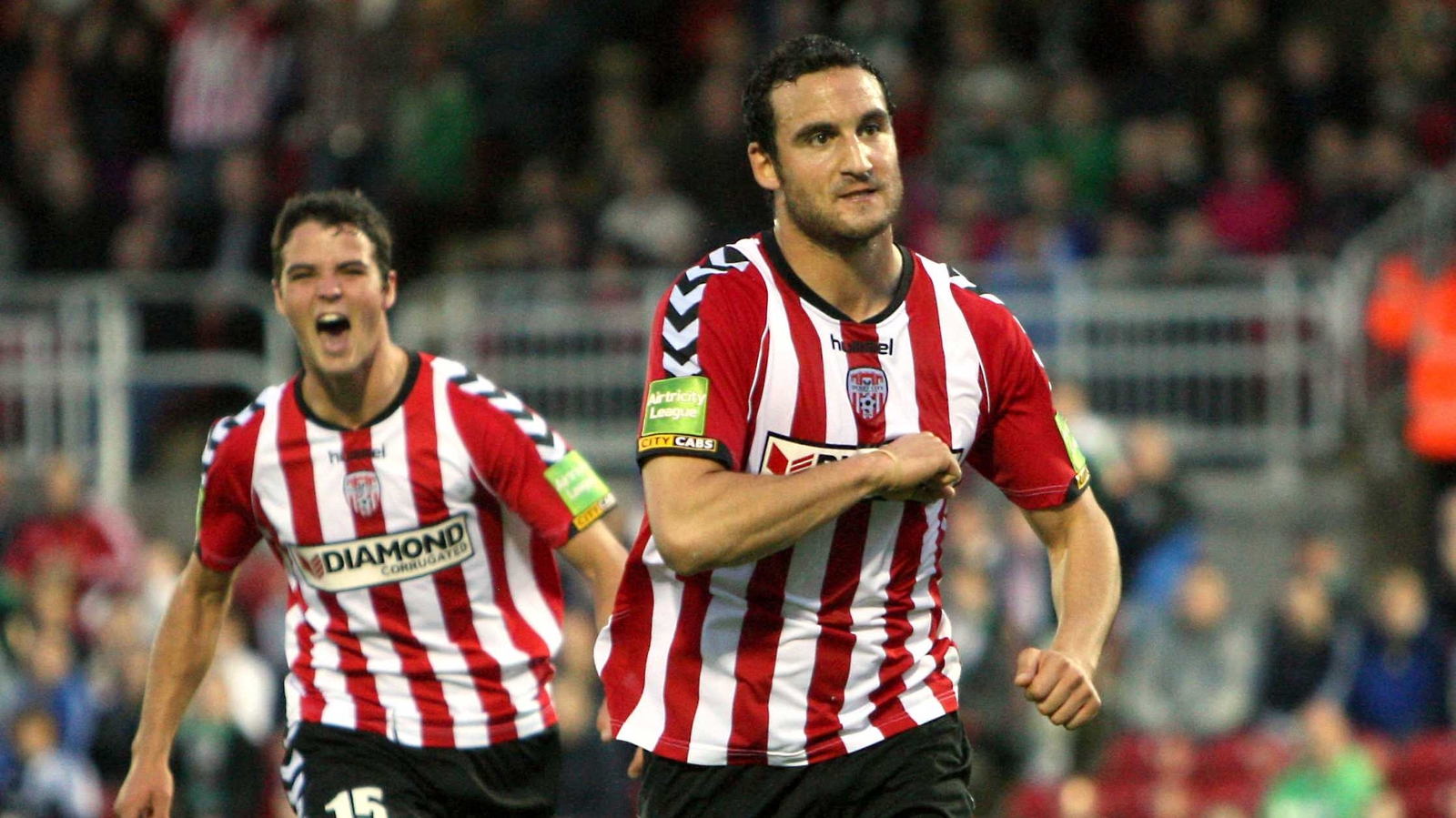 Derry City hit the ground running in their first season back in the Premier Division and eventually finished in third place, but the highlight of the season was the League Cup victory over Cork City.

Derry had the best of a game between two well-matched sides, and on more than one occasion they should have taken the lead only for Eamon Zayed to scuff his lines in front of goal.

Midway through the second half however, a Kevin Deery shot struck the hand of Graham Kavanagh inside the area and referee Paul Tuite awarded Derry a penalty. Despite a disappointing night in front of goal Zayed never hesitated in his responsibilities, and he placed the ball past Mark McNulty to make the all-important breakthrough.

That goal proved to be enough and Derry held on to record their fifth League Cup victory in seven years and their tenth overall. 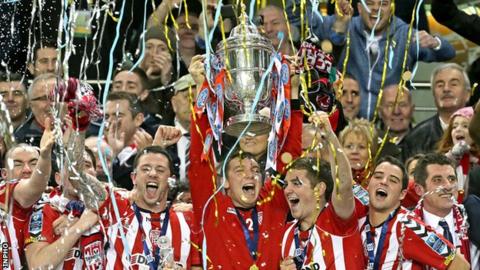 WHAT A GAME….Kevin Deery lifts the FAI Cup in 2012

The memories of the 2012 FAI Cup Final remain to this day as Derry City emerged from a thrilling tie to win their fifth FAI Cup with a 3-2 victory over St. Patrick’s Athletic.

Whilst nothing could match the 2006 final between these sides, this one came close, as City came from behind to win the cup after extra time.

St Pat's took the lead through Sean O'Connor's direct free-kick in the 53rd minute but Derry were quickly level through Stewart Greacen's header. Rory Patterson edged Derry ahead with a penalty after a foul on Stephen McLaughlin but Christy Fagan snatched a late equaliser for St Pat's.

Sub Patterson scored the winner in the first period of extra-time as Derry won the cup for the first time since 2006. 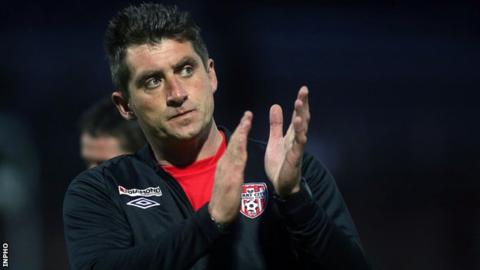 The writing was on the wall before the final ball of an inconsistent season as kicked, but it was still a surprise to see Declan Devine lose his job as Derry City manager after two seasons in charge.

Friday, October 25, 2013 proved to be bittersweet for Devine. For the first time in a long time, Derry City played with the shackles off, and produced a free-flowing attacking display that had often appeared during the good times of Devine’s tenure.

A hat trick from Davy McDaid and goals from Michael Rafter, Dean Jarvis and Simon Madden saw Derry finish the season spectacularly, winning 6-0 against Limerick to secure fourth place ahead of Shamrock Rovers, a result which also made the Candy Stripes the highest goal scorers in the Premier Division.

It also secured European football for a second successive season, but Devine still lost his job. Considering what was to follow, it was a decision that might have been changed with the benefit of hindsight. 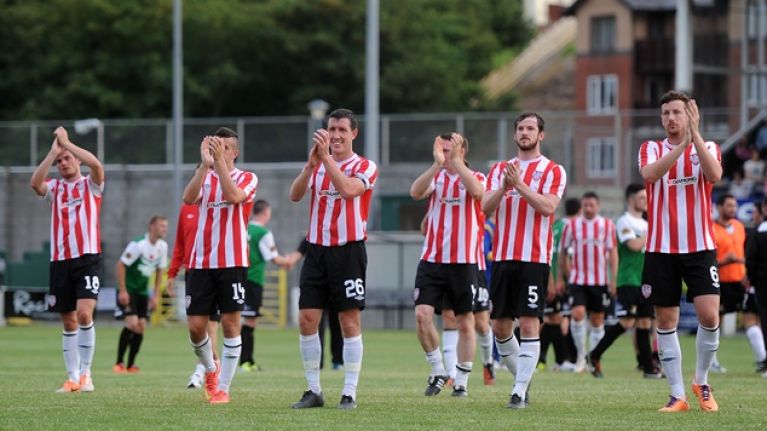 WALE OF A TIME...Derry City dominated Aberystwyth in 2014.

In his early days as boss he enjoyed some significant results, none more emphatic than the Europa League triumph over Welsh side Aberystwyth.

The first leg at the Brandywell saw City dominate and goals from Patrick McEleney, Rory Patterson, Mark Timlin and Barry McNamee all but ended the tie with the second leg still to be played.

City fans travelled to Wales and enjoyed a terrific few days but the highlight was the game itself as City destroyed their opponents to emphasise their superiority.

Michael Duffy and Barry McNamee struck in the opening 15 minutes for Peter Hutton's side, while Patterson scored two more to complete a treble.

Patterson's hat-trick was the first by a Derry City player in Europe and the win was the club's biggest away win in European competitions. 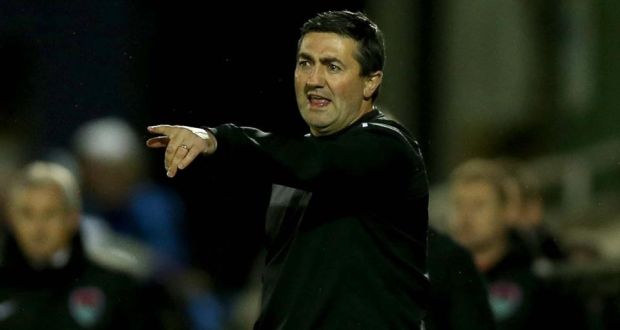 SAD ENDING….Unfortunately, Peter Hutton’s time as manager did not work out.

After a disappointing season in which Derry City were looking over their shoulders near the bottom of the table, Peter Hutton’s time as manager came to an end in September 2015.

Hutton only took charge of the Brandywell outfit in May 2014 and while he successfully guided the side to the FAI Cup final in his first campaign in charge, they were beaten by St Patrick’s Athletic and their league form was poor.

City struggled throughout the 2015 season and they lay just three points above last placed Limerick, having gone 12 straight matches earlier in the campaign without a win.

With resources at the club limited and having struggled to replace established goalscorers, City struggled to just 9 league wins in a 33-game season. Paul Hegarty took charge for the remainder of the campaign, with City ultimately finishing seventh. 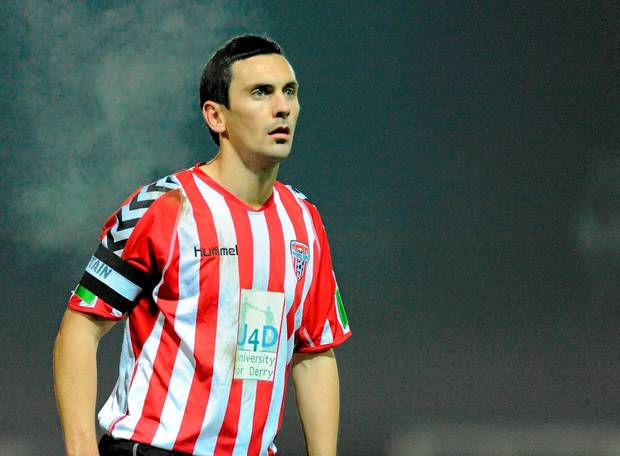 NEVER FORGOTTEN…Mark Farren passed away at the age of 33.

The club was in mourning when, on February 3, 2016, club legend Mark Farren passed away after a long battle with illness.

Farren, Derry's record goalscorer, had been receiving treatment for an aggressive brain tumour with the whole country behind him.

He became Derry City's all-time top goalscorer in 2012, when he overtook Liam Coyle's tally of 112, with a hat trick against Mervue United in the FAI Cup.

Farren was in the Derry teams that won the FAI Cup in 2006 and 2012, and was voted player of the year by the Professional Footballers' Association of Ireland in 2005. He left Derry to join Irish League club Glenavon in 2013 but was forced to finish playing because of his illness.

The club retired the number 18 in his honour. 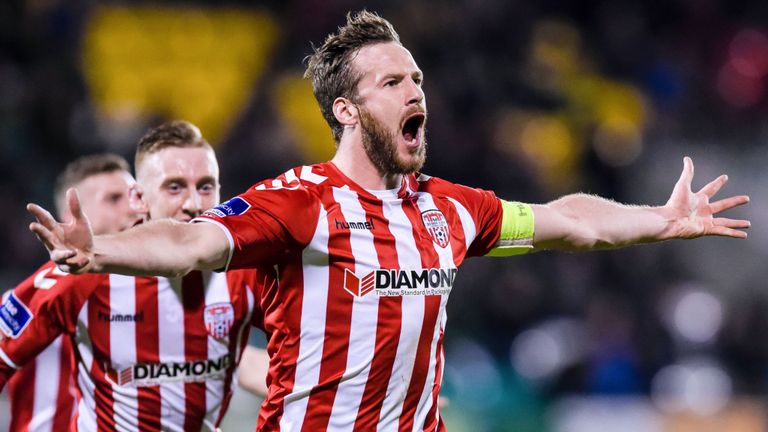 Less than a year after the death of Mark Farren, Derry City Football Club and its fans were left stunned and shocked by the news that club captain Ryan McBride had passed away suddenly at the age of 27.

McBride, who joined his hometown side in 2011, had played in all four games for the Candystripes at the start of a new season, with four victories taking Derry top of the table.

McBride scored the winner for Derry in a 1-0 win away to Shamrock Rovers and just days before his death, he was also on target for the Candystripes in their 3-1 win over champions Dundalk at Maginn Park.

His final appearance came in a 4-0 win over Drogheda United on March 18. Just over a day later, news began to emerge of his passing.

His death shocked the entire country and his funeral was attended by countless team mates and opponents as the city came to a standstill in memory of a ferociously passionate captain. 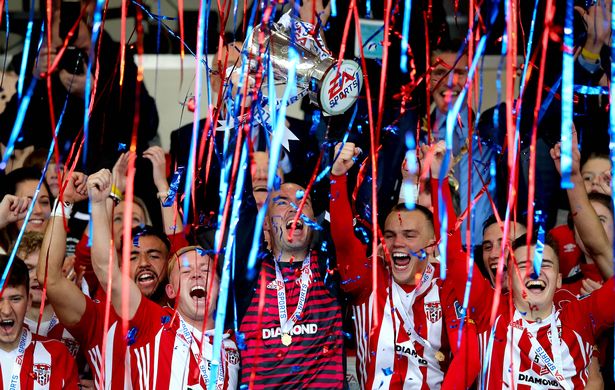 NOT ALL BAD… The 2018 season at least had some silverware.

Derry City won their first trophy in six years when they defeated Cobh Ramblers 3-1 to lift the EA Sports Cup.

A second-half header from Darren Cole and a penalty from Aaron McEneff won the final at the Brandywell for the Premier Division side against their First Division opponents.

Ronan Hale hit the opener for Derry but a Chris Hull equaliser meant the sides were level at half-time.

It was the 11th time Derry City have won the League Cup - more than any other side - and their first trophy under manager Kenny Shiels. 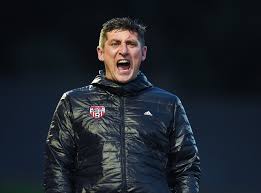 BACK WHERE HE BELONGS… Declan Devine is back as Derry City manager.

At the end of a horrible season in which Derry had conceded 82 goals in all competitions and finished in 8th place, change was inevitable and within weeks of Shiels’ departure, Devine was back on board.

He brought with him former players Kevin Deery, Marty McCann and Paddy McCourt and set about building an almost entirely new squad.

In his first season back, Devine and his new-look squad defied all expectations, with a core of local players bringing passion back to the Brandywell, and the fans loved it all.

Devine led Derry City to a fourth place finish and European football as well as an EA Sports League Cup final appearance, which saw the Candystripes lose out narrowly on penalties to league champions Dundalk.