Almost there! Derry City close in on Europe with deserved victory over Sligo Rovers at the Showgrounds 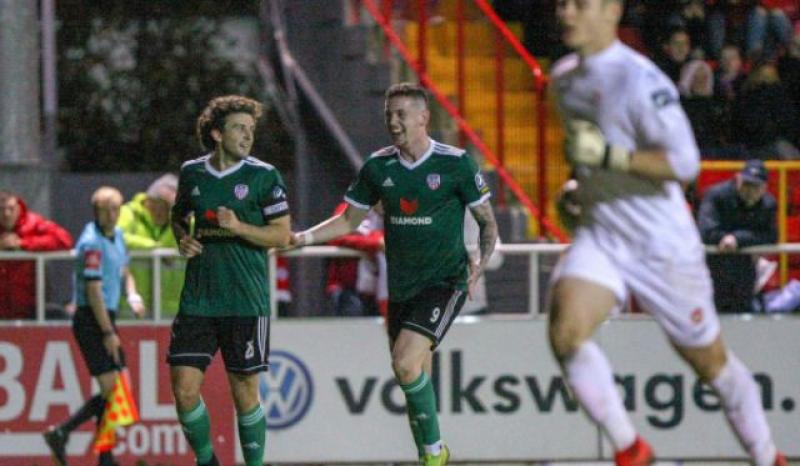 Derry City have one foot in next season’s Europa League after a thoroughly deserved win over Sligo Rovers at the Showgrounds.

Derry City have one foot in next season’s Europa League after a thoroughly deserved win over Sligo Rovers at the Showgrounds.

Declan Devine’s men now need only a point to secure European football against St. Patrick’s Athletic on Tuesday night at the Brandywell after coming from behind to win.

City started the game well and were well on top but they were shocked to find themselves a goal behind on 13 minutes when full back Lewis Banks swept Sligo into the lead with the home side’s first attack.

From that moment it was all Derry however and they came so close to equalising through a spectacular effort from Jamie McDonagh who raced towards goal past three Sligo defenders, before his curling effort bounced off the top of Ed McGinty’s crossbar.

Derry deserved to be level and they got their reward just past the half hour mark when Ciaran Coll and Barry McNamee combined on the left and the captain’s cross fell for McDonagh on the edge of the area and he volleyed it left-footed beyond McGinty and into the corner of the net for 1-1.

The game turned on its head completely just before the break thanks to a horror show from goalkeeper McGinty who, in attempting to clear the ball, cannoned it straight off McNamee with the ball ricocheting into the net to give the Candy Stripes the lead.

Sligo upped their game in the second half but they failed to trouble Peter Cherrie at all and in the end the Candy Stripes comfortably held on for a deserved victory.