A second defeat in succession for Rainey 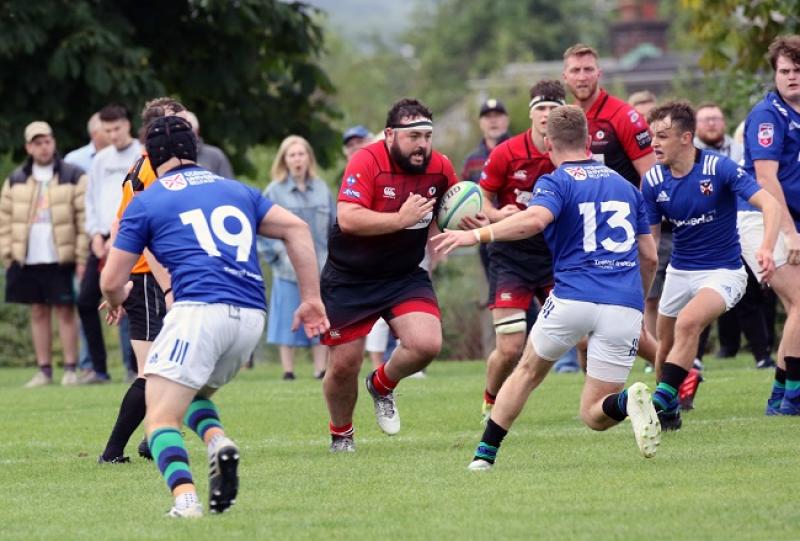 Rainey Old Boys were fully aware of the task that lay before them when they travelled down to the Dub for their clash with fellow AIL 2A side Queen’s, but they never could have expected to have their line crossed nine times as the confident Queen’s men went on to a comfortable win.

In perfect conditions Rainey faced a confident Queen’s side who had defeated AIL Division 1B side Banbridge 79-15 in the weekend before. To Rainey’s credit the opening 15 minutes were tightly contested with the Magherafelt side dominating possession at times in the Queen’s half, with strong runs from second row's John McCusker and Connor Smyth.

Queen’s had gifted Rainey with a number of penalties in the early exchanges with fullback Scott McLean narrowly missing a penalty kick 40 metres out.

However, Rainey wouldn’t have to wait long to get on the scoreboard as quick thinking from scrum half Rory MacGinty took a quick tap and go, dancing through the student’s defence with McLean converting in what would be the only points of the game for Rainey.

Queen’s responded quickly and dominated possession for the next twenty minutes with Rainey’s defence tested which saw Andrew Brown make some impressive tackles as he replaced the injured Lee Murphy.

The students scored with quick ball and clever distribution through the backline to catch Rainey out in each of their three visits to Rainey’s 22. Shortly before the halftime whistle, Rainey suffered another injury with prop Andrew Nevin leaving the field after a strong individual performance.

However, Queen’s managed to score on the stroke of half time as their winger crossed over the line to make the score 24-7.

There was little hope of a comeback as the home team enjoyed the majority possession and controlled the game for the next 30 minutes demonstrating their skill as they scored a further five tries.

However, in the final 10 minutes of the game, Rainey managed to keep the students at bay with Rainey’s Neal Hastings managing to chase down the Queen’s winger in what would be a try-saving tackle.

Rainey now look forward to hosting Banbridge in their first home game in 11 months in what will be another testing match.  Rainey’s seconds kick off their 2021-2022 season as they host Grosvenor. Both games kick off at 2.30.