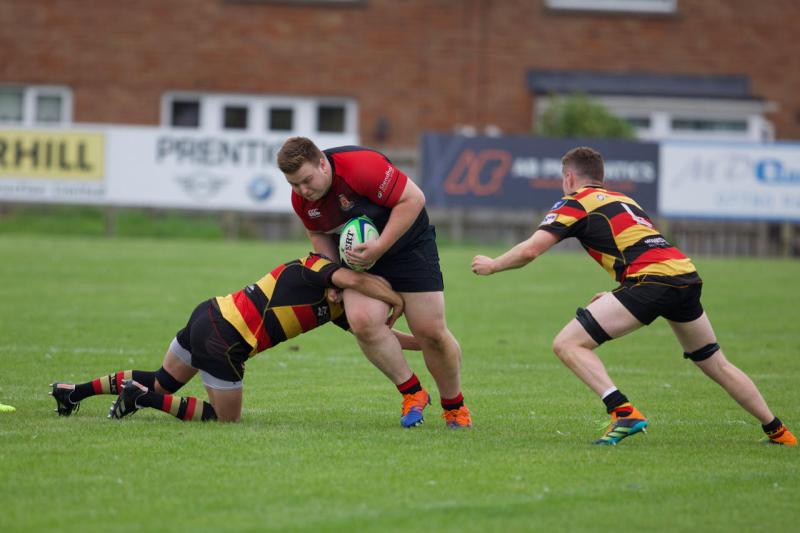 Jack McIntosh on the attack for Limavady. (Pics: Stephen Haslett)

After last week's win at Coleraine, Limavady were on their travels again on Saturday as they visited Pollock Park, the home of Lurgan Rugby Club.

Once again, Limavady anticipated a difficult game and this proved to be the case.

With only a few minutes on the clock Lurgan drew first blood when Dean Wilson  scored the first try. This was duly converted to give Lurgan a 7-0 lead.

Limavady managed to get back on even terms within a short time. On their first foray into Lurgan’s half, following a strong carry by Jack McIntosh ,the ball was passed on to Luke Faulkner, and as he looked certain to score Lurgan’s centre made an illegal attempt to stop him. The referee quickly blew for a penalty try and yellow carded the Lurgan player.

Lurgan again took the lead when Stephen Nolan kicked a penalty. However from that point onwards Limavady took control of the game.

By raising the tempo of the play  three further tries were scored before half time. Ben Riley, playing a captain’s role, scored twice and the evergreen Jody McMurray the other, as Limavady went in at half-time leading 26-10.

With the second half barely a few minutes old Jody McMurray took a quick tap penalty and raced through an unprepared defence to touch down under the posts.

Peter Wilson converted to stretch the score to 33-10. Limavady seemed to ease the foot of the throttle at this point and allowed Lurgan to come back into the game.

Limavady were delighted to come away with the bonus point win. As a unit the team played well with some fine individual performances.

Jack McIntosh had an excellent game carrying with purpose  and Luke Faulkner was to the fore running his back line with great efficiency. The back row of Joel Boucher, Jody McMurray and Ben Riley totally outplayed their counterparts, winning the battle for the loose ball.

Coaches Graeme Eastwood and Peter Wilson were delighted with the win and in particular the quality of the play reflecting the work put in on the training pitch.

Saturday sees the first home game of the season when Larne make the trip to Limavady.