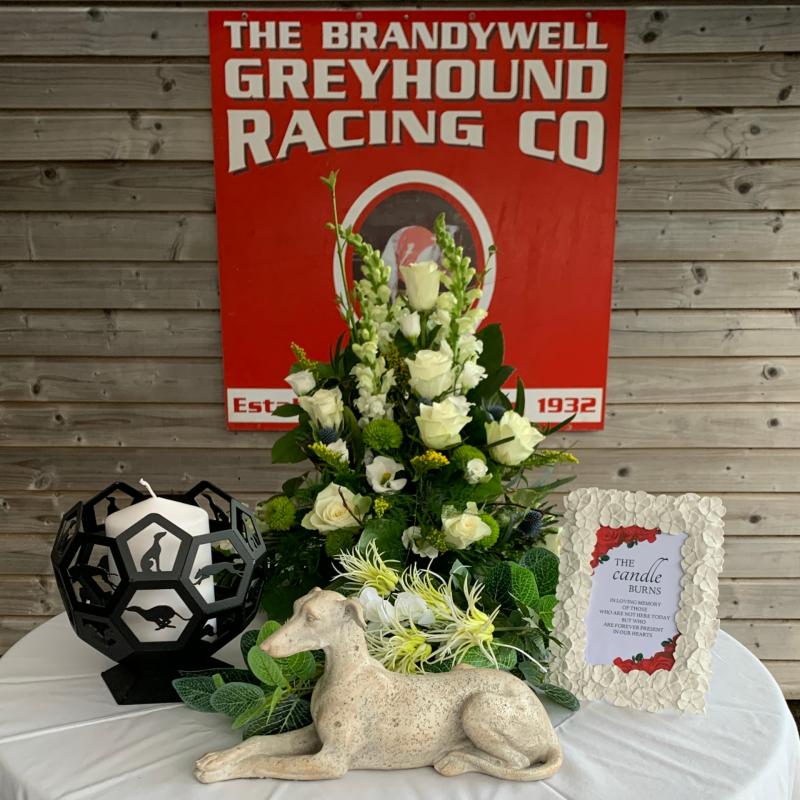 The Table of Remembrance.

A Table of Remembrance was set up at the entrance to the Stadium and the names of many of our dearly departed friends and family were read out midway through the race meeting and a minute’s silence was held in their memory.

All the races were named after signs that are commonly associated with bringing comfort to those who have lost a loved one.

The race card prepared by the Brandywell Greyhound Track Management thanked the IGOBF for their sponsorship and went on to say, “The world is a very different place these past few years, many have missed the chance to celebrate the lives of those we lost. This event will hopefully go some way in helping us remember and celebrate our past friends & family.

"All those remembered here tonight have had a role in shaping the past but more importantly the future, they have ensured the track has had good foundations for us all to build upon.”

Racing got underway with Artic Blonde (Sh Avatar x Coolhill Boss, Apr ’20) winning the first race, The Friendly Robin Sprint, in 16.98 for Shaun Keeney. With one career win in Newbridge to his credit, he has adapted well to the Brandywell circuit in only his first race here. 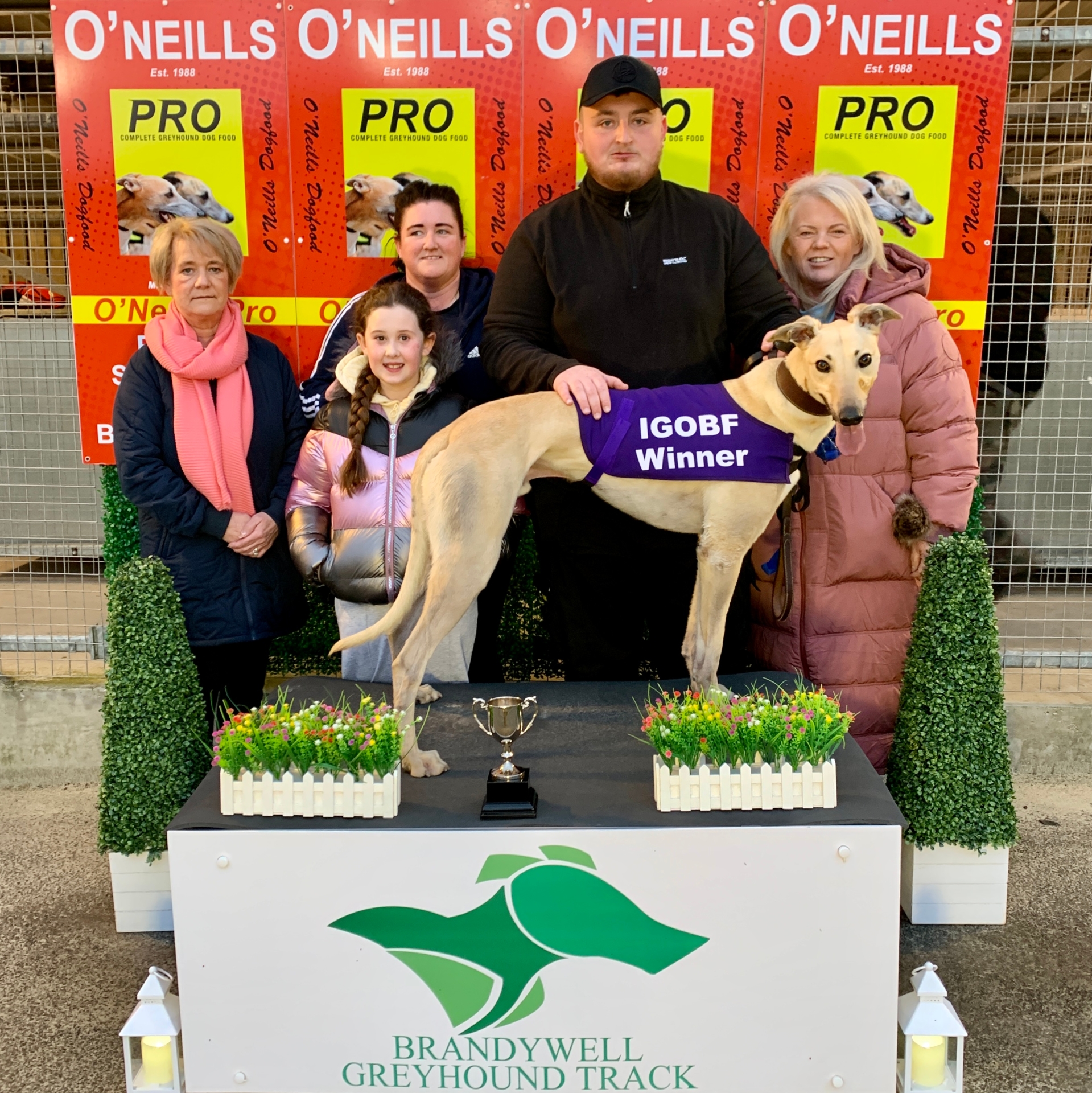 Artic Blonde with Shaun Keeney after he won The Friendly Robin Sprint. Also in photo from left to right; Ann O’Driscoll, Wendy O’Driscoll with Sophie McLaughlin and Bernie McCosker.

Do It Honey (Newinn Wonder x Do It Chubbys, Jun ’19) ran on strongly up the home straight to catch early leader Wee Mick. She won the Beautiful Butterfly Sprint in 16.96 for Ray White and this was her first career victory on her fifth attempt.

In a race where most of the field got held up by some crowding at the first bend, Hit Parade (Eden The Kid x Pinerra Ranger, Jan ’20) took advantage of his ideal trap 1 draw to track close to the inside rail and land the White Light Sprint for Brendan McLaughlin in 17.30. This was his first race at Brandywell after starting his career in Tralee before moving to Cork and gives him his second career win from 12 starts.

When Michael Feeney named his 3 month old puppy Beautiful Peggy (Ela Ela Genie x Velvet Holly, Jun ’19) after his late mother, he could have hardly expected that she would grow up and mature into such a terrific athlete with such a determined attitude towards the thrill of competitive chase. Maybe Michael just hoped that his mum’s blessings would be bestowed on her and after all her success over the last 2 years indeed that may well be the case.

On this special night Peggy showed her courage at the first bend and opened up what was an unassailable lead to win the Glorious Rainbow 500 in 27.82. Regardless of the high quality of her opposition, it seemed almost fateful that Michael and his Beautiful Peggy would be standing proud on the winner’s podium given the significance of Remembrance Night and the beloved lady who was her namesake. 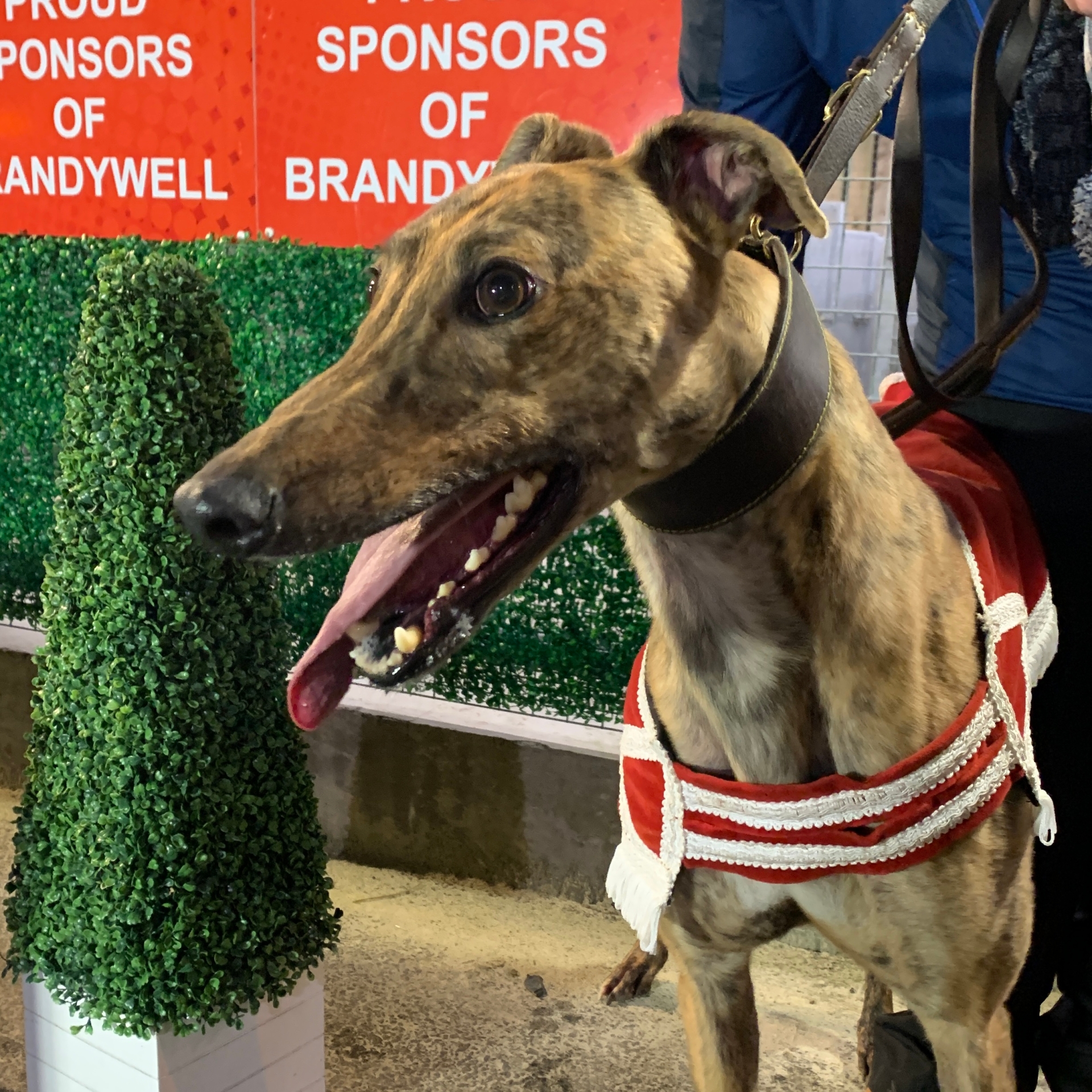 The Angel’s Feather 525 was won by Rosehill Vic (Ballymac Vic x Avas Cailin, May 18) in 29.28 for Juliet Aldridge and Vincent McGuinness. Slow away from trap 6, this lad used his stamina to take up the lead going into the third bend and ran on well to win by 1.5 lengths from Rathronan Syd. Vic now has 8 career wins to his credit.

Barnish Ray (Droopys Sydney x Darrig Alainn, Nov ’19) gave Darren Fahy his first winner at the Brandywell and what a popular winner it was. The rapturous cheers of the racing enthusiasts were heard across the Stadium as Ray took up a lead at the first bend and held it comfortably throughout the race.

This dog had only won one of his 14 career starts before coming to Brandywell and in winning The Evocative Fragrance 500 in 28.25 he has improved 0.10 on his race time last week. 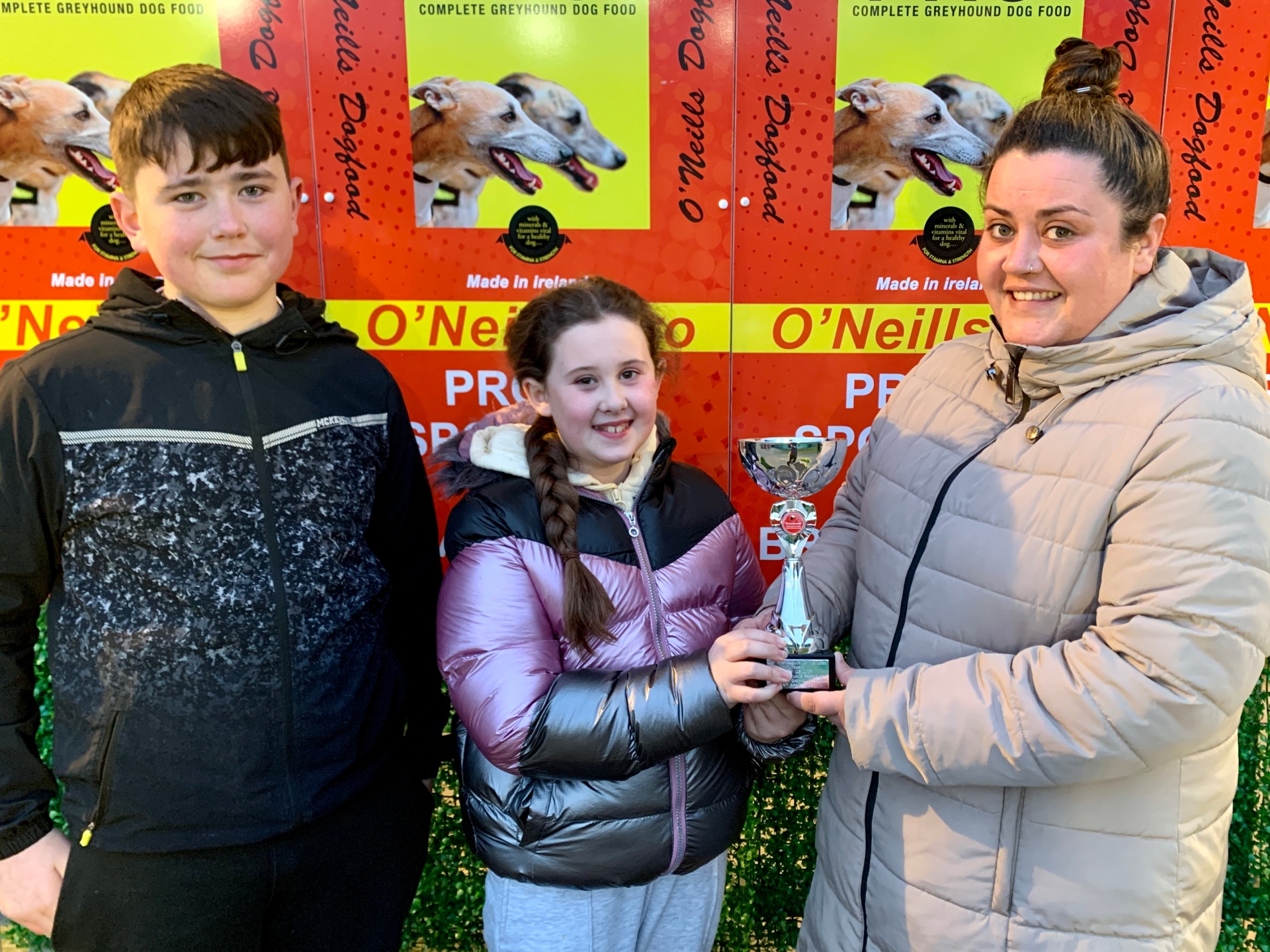 Sinead Foley (right of photo) presenting the ‘Performance Of The Week’ Trophy on behalf of the sponsor James Hasson to the connections of Why Geldof who was voted favourite performer at last week’s meeting. Sophie McLaughlin and Ciaran McElhinney receiving the trophy.

A son of super sire Droopys Sydney, this lad should give his new owner plenty of thrills as he gets used to the Brandywell circuit.

The Berry brothers, John & William, for the Cheap As Chips Syndicate, were rewarded on their return to the Brandywell when Glengar Eden (Ballymac Best x Killinan Rosie, Nov ’19) won the Nostalgic Song 500 in 28.34. Well away from trap 2, she took up the lead from Fridays Bear approaching the third bend and did enough to just hold off the late challenge of Knockroe River.

Eden has been racing around the Mullingar 525 circuit and this was a very welcome return to form with her first win from her last 13 races which brings her overall tally of career wins to 6. The shorter distance of 500 yards at Brandywell seems to play to her strengths.

Track specialist Blackstone Chris (Ballymac Best x Laurdella Jane, Apr ’20) showed sensational pace into the first bend to take up the lead in the Cherished Memories Sprint and ran on well to win by 3.75 lengths in a very fast 16.61 for Thomas Hasson. 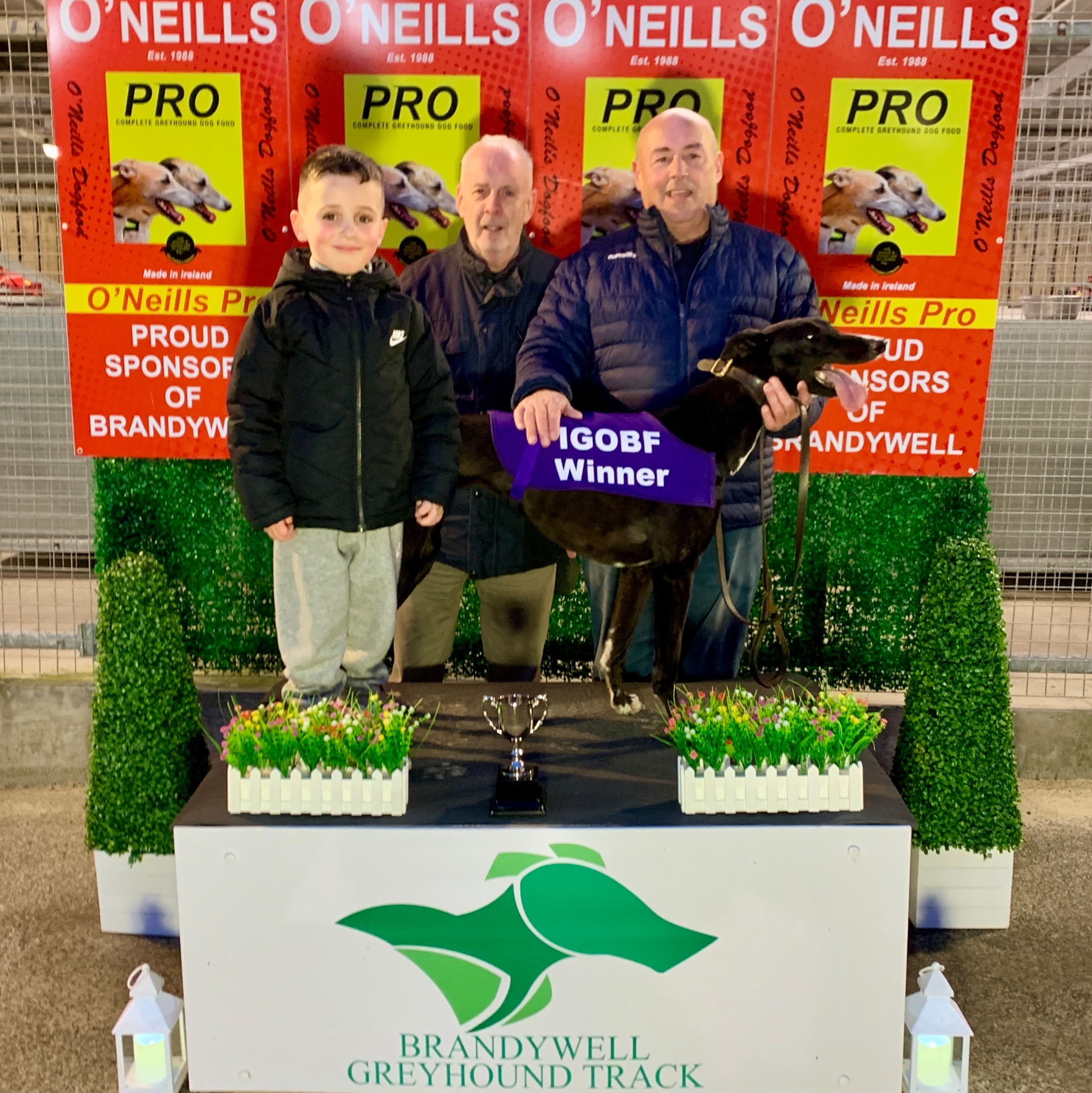 He now has 7 wins and 3 seconds from only 13 career starts. He is an incredibly competitive greyhound and getting to the race track is clearly his absolute passion. Chris also won the bag of O’Neills Dog Food which was kindly sponsored by Andrew O’Neill.

As the evening drew to a close, the community of enthusiasts Brandywell passed by the Remembrance Table on their way home. Time for another moment of quiet reflection as we continue to enjoy the breed and the sport that is part of the very fabric of our lives and which has been the fabric of the lives of many of our family & friends over the decades who we greatly miss.

The next race meeting at Brandywell will be Monday 25th April 2022. First race is at 8pm. 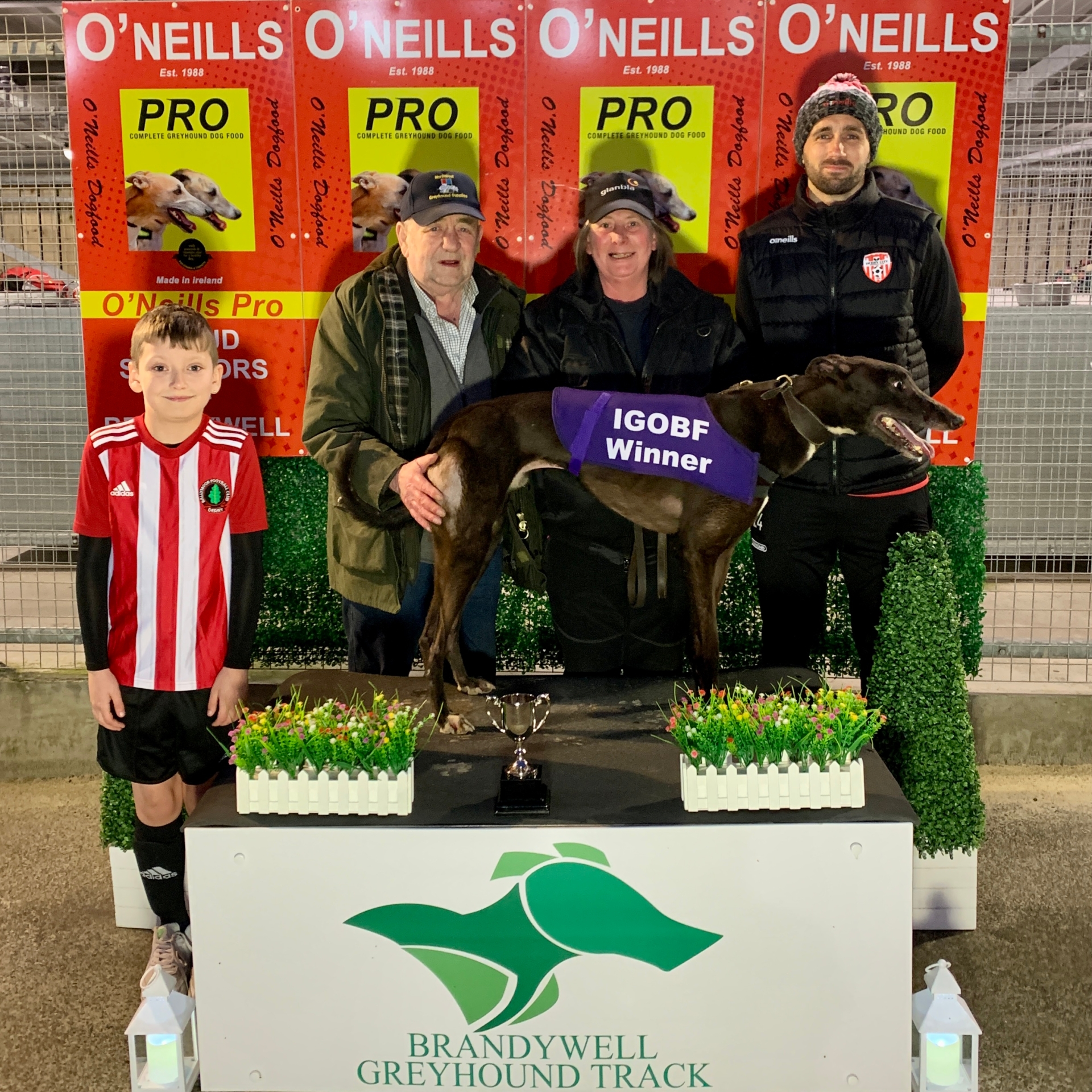