Ulster University’s Coleraine campus has almost three times as many administrative staff compared to its Magee campus despite having comparable student numbers, the Derry News can reveal.

Figures obtained under the Freedom of Information Act show there are 355 administrative staff based at Coleraine and 125 at Magee.  The latest figures available show 4,313 students are based at Magee and 4,495 at Coleraine.

Independent Councillor, Gary Donnelly, who supports proposals for an independent north west university described the figures as “appalling” and further evidence that Derry City and Strabane District Council should lay the groundwork for a standalone institution.

"These figures are appalling - evidence that UU is clearly only interested in Coleraine and Belfast - but they are not shocking, as we have known all about their propensity for discrimination for generations already.

“Council is threatening to partner with this organisation and hand them over £85m of capital from the City Deal - money that could go out the back door to Belfast to pay for UU's massive overspend there. This needs to be reconsidered.”

He added: "The Magee Campus - and its budgets - must come back under local governance. The North West - which we have previously defined as the combined Donegal and Derry/Strabane council areas - needs its own independent university to reverse the tide of educational discrimination which has existed here since partition.

“It is time Derry City and Strabane District Council began preparing to develop a standalone university here and local elected representatives need to keep this firmly on the agenda." 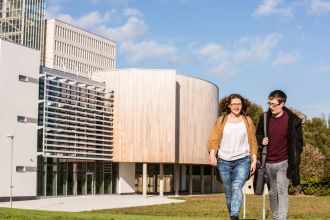 Spread amongst the figures for each of the institutions are the salaries of all top earners at UU depending upon which campus they are based.

Departing Vice-Chancellor, Professor Paddy Nixon, was appointed and took up post of VC and Chief Accounting Officer on 1 July 2015.

According to the university's latest financial statement for 2017/18, the VC earned £270, taking in benefits and employer's pension contributions that rises to £324,000.

The reports states: "Vice–Chancellor leads Ulster University to make a significant social, economic and cultural contribution, helping our community to thrive and confidently supporting Northern Ireland on the global stage.

"In an increasingly competitive sector, university leadership reflects the scale, complexity and impact of higher education across research and teaching."

The Vice Chancellor’s salary is determined by the University’s committee responsible for remuneration and governance.

In response, an Ulster University spokesperson said there are administrative staff based on each campus, with many departmental roles supporting activities across its multi campus University.

She added: “As such, the number of administrative staff does not directly correlate to the student numbers on each campus.

“All categories of University staff are located and distributed across campuses, depending upon business needs, operational requirements and academic or professional specialisms.

“Although they may be attached to one campus for the purposes of staff records, many teaching staff are mobile and work across more than one campus.  The ratio of staff to students varies, depending upon the nature of the subjects and course provision.”