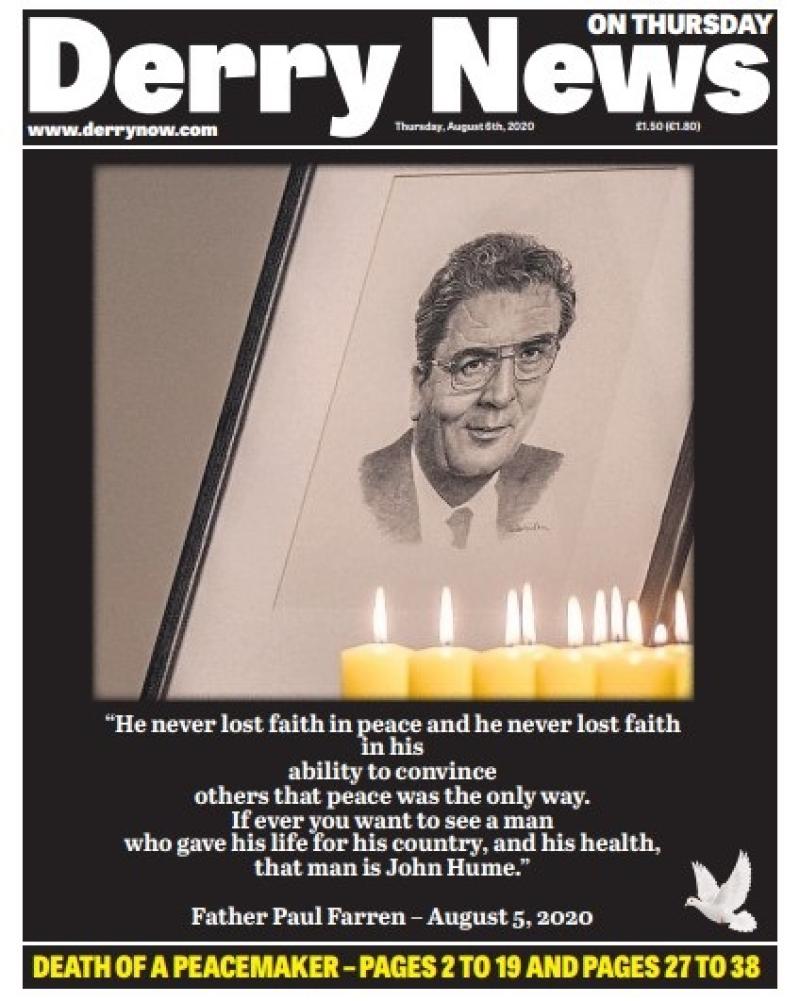 This Derry News front page following the death of John Hume has been nominated for a Regional Press Award.

Tomorrow marks the first anniversary of the death of John Hume.

Mr Hume, one of the key architects of the Northern Ireland peace process, was 83.

He had been suffering from dementia for a number of years.

Mr Hume's death led to a huge outpouring of sadness and many tributes were paid to him from political leaders throughout the world.

Due to the Covid pandemic, his funeral was on a much smaller scale than would have been expected for such a hugely influential figure.

Mr Hume, who was named as the 'Greatest Ever Irish Person' in an RTE poll several years ago, was laid to rest in the City Cemetery, following a service in St Eugene's Cathedral which was attended by his family and a small number of invited guests.

St Eugene's will tomorrow also be the setting for an anniversary Mass in memory of Mr Hume.

Following the former SDLP leader's death, a foundation was set up in his honour.

The John and Pat Hume Foundation, which also recognises the key role played by Pat Hume in supporting her husband's work, aims to support and inspire peace initiatives throughout the world.

Since its creation last year, the foundation has hosted a number of events.

Meanwhile, the Derry News has been nominated for a prestigious award for its coverage of Mr Hume's passing last year.

The paper has been shortlisted for the Front Page of the Year in the UK Regional Press Awards for the wraparound front page which it published in the edition of Thursday, August 6, which carried extensive coverage of Mr Hume's funeral.

The front page was made up of a poignant image of Mr Hume together with a touching quote from Father Paul Farren who officiated at the funeral.

The awards are seen as the 'Oscars' of the UK newspaper industry, recognising the best coverage provided by regional and local papers.

The winners will be revealed in a virtual announcement on September 16, awards organiser, the Society of Editors, (SoE) has announced.

“The coronavirus crisis has shown more than ever the vital importance of the regional press as the beating heart of communities across the UK. It is clear from these shortlists that the local and regional media has risen to the challenge,” she said.