McDonald's has scrapped an advert which used the words "Sundae Bloody Sundae" to promote a Halloween dessert amid complaints. 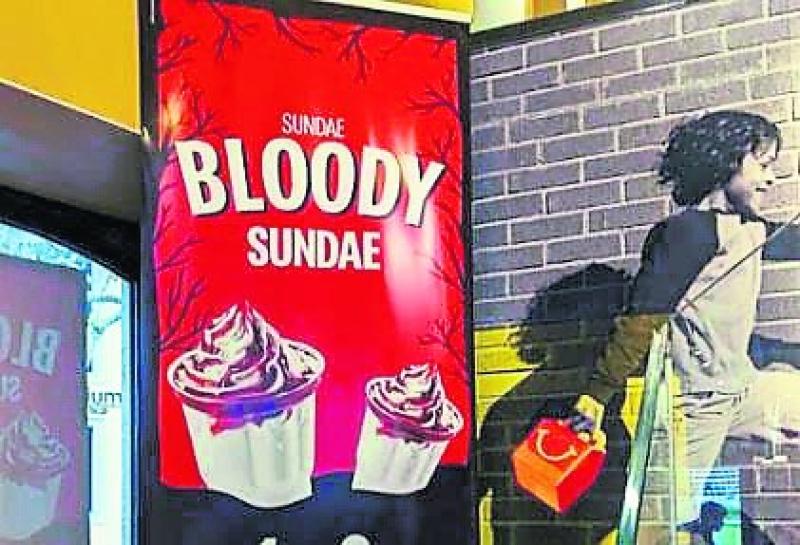 McDonald's has scrapped an advert which used the words "Sundae Bloody Sundae" to promote a Halloween dessert amid complaints.
Thirteen people died after members of the British Army's Parachute Regiment opened fire on civil rights demonstrators in the Bogside on January 30, 1972. A 14th person died later from his injuries.
An image of the advert for a two-for-one dessert offer, was posted on Twitter by an Irish user who spotted it in a McDonald's in Portugal.
After public backlash, McDonald’s Portugal decided to pull all promotional material and said it had never been intended as “an insensitive reference” to Bloody Sunday.
In a statement, McDonald's Portugal said: “When promoting its Halloween Sundae ice cream, McDonald’s Portugal developed a local market activation for a small number of its restaurants in Portugal.
“The campaign was intended as a celebration of Halloween, not as an insensitive reference to any historical event or to upset or insult anyone in any way. We sincerely apologise for any offence or distress this may have caused.”
It is not the first company to inadvertently cause offence by invoking painful memories of Irish and British history. In 2006 the US firm, Ben & Jerry, apologised to Irish customers after it launched Black and Tan ice-cream. The firm said the flavour had been inspired by the classic mixture of stout and pale ale, but consumers were quick to point out the name had more sinister associations.
The Black and Tans was a force of temporary constables recruited to assist the Royal Irish Constabulary (RIC) during the Irish War of Independence known for their attacks on civilians and civilian property.
In 2012, Nike apologised for nicknaming a pair of skate shoes “The Black and Tan”, saying it had been “unofficially named by some using a phrase that can be viewed as inappropriate and insen-sitive.