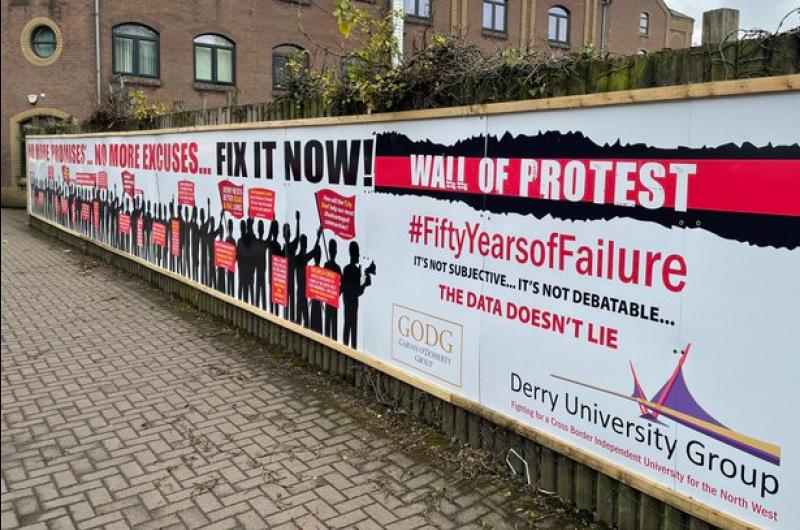 Derry University Group banner on Strand Road in the city.

Derry City and Strabane District Council should, as a matter of urgency, convene with the Dáil and Westminster to establish a new North-South body for Higher Education in the North West.

The call came from Derry University Group, which is fighting for an independent third-level higher education institution for Northwest Ireland, managed autonomously by the city-region.

The North-South body for Higher Education in the North West was one of the key proposals in a recent report by the Royal Irish Academy’s Higher Education Taskforce, which comprises 40 of the leading educationalists on the island.

The report will be discussed at a forthcoming conference in Derry hosted jointly by the John and Pat Hume Foundation and the Royal Irish Academy.

The conference on ‘The Future Development of Higher Education in the Greater North-West of the Island of Ireland, will take place in the Waterside Theatre on October 11.

Titled ‘The role of regions and place in higher education across the island of Ireland’, the Royal Irish Academy report said: “In the short term, it is concluded that an independent advisory planning body supported by funds from PEACE PLUS, the Shared Island Unit and a major joint UK-EU-Ireland-NI initiative involving sustained commitment, including in transport (road, rail and broadband/digitalisation) infrastructure would be the most appropriate way of developing the collaboration, synergy and institutional structures that are necessary to achieve a step change in the region’s prospects.

“Such an initiative would drive the economic, social and cultural development of the north-west of the island, underpinning a north-west economic corridor with unique strengths and opportunities.

“It would also demonstrate that, notwithstanding the difficulties that have emerged over Brexit, the UK, EU, Ireland and NI remain committed to continued peace and prosperity across the island of Ireland, and to collaborative and synergistic links between Ireland, the UK and Europe."

"The Taskforce recommends the creation of a NI tertiary education oversight body to advise government, help define sectoral mission and ensure greater coordination and regional distribution within the university and FE sectors. Given the critical nature of tertiary education in determining the economic, social and cultural welfare of NI, the establishment of such a body warrants high priority within the NI Executive’s agenda.”

Speaking to Derry News, Derry University Group spokesperson, Garbhán Downey, said: “The Royal Irish Academy taskforce has provided a blueprint which will deliver the independent university for the North West and will also drive the economic regeneration of Derry and Donegal. The Derry University Group welcomes the Hume Foundation’s support for the RIA proposals.

“The next key step will be for Council, which is also meeting with the Royal Irish Academy this autumn, to convene with the Dáil and Westminster to establish the new North-South body for Higher Education in the North West as envisaged by the Academy.

“Once this North-South body is in place, its remit will be to develop and constitute the structures for a new cross border university, to be funded from Dublin, London, Europe and the US, again as recommended by the Academy.

“To ensure that the massive imbalance in university places in the North is corrected, the new university will remain independent of the Belfast universities and will not be dependent on Belfast-controlled funding bodies,” said Mr Downey.

According to Garbhán Downey such bodies already exist in the South and in Britain.

He added: “This will help put an end to the generational discrimination which has existed against the North West with regards university provision.

Crimestoppers offers reward of up to £20,000 for info that leads to arrest & conviction of those responsible for Lyra McKee's murder

“Significant readjustment, rectification and reparation towards the North West will also be required to rebalance university provision in NI, again under the supervision of this new oversight body.

“The Derry University Group has previously made submissions to the Oireachtas, and at Dublin’s Mansion House and at Westminster. We have also contributed substantiated input into the New Decade New Approach programme and to the Royal Irish Academy’s recent report into the future of Higher Education on the island. And we are encouraged that, at last, the fruits of the labour are beginning to show.

“In particular, the Derry University Group commends the Royal Irish Academy on its commitment to university provision in the North West and on the continued good work of the taskforce. We encourage all those interested in higher education in the North West to study and support the Academy’s proposals.”