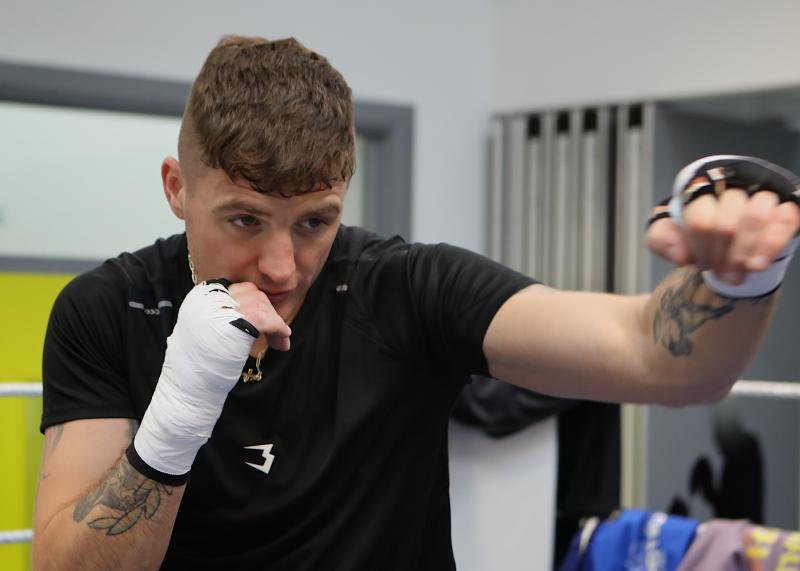 Connor Coyle is in non-title action against Mexican Silverio Ortiz this Saturday.

Connor Coyle feels he has to make a serious point against Mexican Silverio Ortiz this weekend ahead of his first NABBA title defence in October.

The end of 2022 promises to be a busy one for the Derryman, and that’s exactly how he wants it. This weekend’s non-title fight against veteran Ortiz (37-31) is looked at as just a prelude to the main event ‘Down & Dirty 4’ which will take place in Boston on October 29. All being well, Coyle may even squeeze one other fight out before December ends, which would take him to 19-0 and well into the top 10 in the world in time for Christmas.

For all that to fall into place however, Coyle needs to see off Ortiz first and foremost.

“I can’t take him lightly because he’s beaten a numerous number of undefeated fighters, people 15-0 and 16-0, and he has beaten people who have gone on to win world titles,” he explained. “He’s a crafty fighter, he’s Mexican, he’s tough so I’m not going to expect it to be a walk in the park. I can’t take him for granted so I’ll just need to be on my game and do what I do best.

“Fight week now is when the excitement creeps in and you know you’re getting close to putting on a good show after all the hard work put in over the last month or six weeks. I’m just excited now to get in and do the business now on Saturday night.”

Victory over Antonio Todd in May has taken Coyle to ninth in the world, where he has caught the attention of promoters and potential new opponents. With more eyes on him than ever, the 32-year-old knows he has to impress.

“We have had numerous phone calls with offers so my name is out there now and people know Connor Coyle in the Middleweight division,” he explained. “We’ve had the phone calls and we’ve had the offers coming in so it’s about taking them at the right time.

“It’s a good feeling being here, but I need those high-profile fights now just to feel it and just to feel that I deserve to be here and deserve to be with the top 10 middleweights in the world. Now that we’re here we need to make a statement in each fight and prove that we belong if I’m looking to get the main goal which is to become champion. Every fight I have to prove myself.”

Coyle has been on quite the journey to get to this point in his career, but he still feels his best days and biggest fights are ahead of him. As the stakes get higher, so to must his standards.

“You’re always going to be improving yourself,” he added. “If you win a fight in a certain way people will always have negative stuff to say. Someone will always have something bad to say, but we will just keep moving on and I’ll fight whoever’s in front of me and beat whoever’s in front of me and keep moving up and climbing up those rankings even more.

“We want to finish the year of with at least four fights, which will be this fight and another fight at least, and possible five if we/re lucky and there’s no injuries and there’s a possibility of getting on another card. We’ll have at least four fights which is busy for any boxer. The last few fights I’ve had no major punishment or no injuries so thank God I’ve been able to get through those fights and continue on with training as normal.”

Ortiz would like nothing more than to stop Coyle in his tracks this Saturday in Tampa, Florida, while Coyle has his own intentions; he doesn’t want a points victory in this one.

“Realistically I need to go into this fight and make a statement,” he said. “I need to put this boy away and I need to do it in good fashion. I need t prove that I’m levels above the guy I’m fighting. The main goal is to become world champion, and I’m not going to stop until I am.”

Connor would like to thank all his local sponsors at home who have always been supportive throughout his career: