Eight separate incidents are being probed within the county. 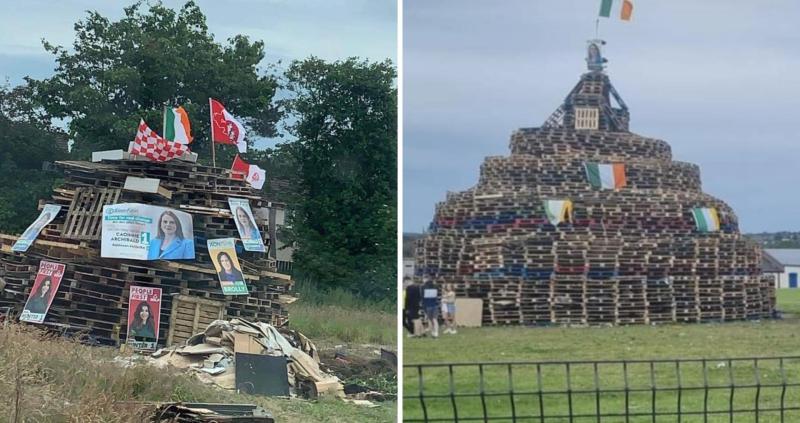 Images of election posters and flags placed on bonfires appeared after July 12 this year.

Police have confirmed they are investigating a number of incidents in which items were placed on Eleventh Night bonfires and alleged 'sectarian chanting' occurred.

Amid details of the incidents throughout Northern Ireland, there are eight separate listings for County Derry locations.

At Drumahoe Road, Derry, Irish 'tricolour' flags were reported on a bonfire, while at Bonds Street in the city, police are investigating effigies burned on the bonfire site, as well as 'sectarian chanting'.

County Derry MLAs hit out as posters placed on bonfires

A number of Derry GAA flags were also placed on the pyres.

Tricolour flags were also reported on a bonfire at Ardina Road, Articlave, while police are investigating reports of election posters being placed on bonfires at Fort Road and Kinard Park in Garvagh.

Another incident in which a flag was allegedly stolen and put on a bonfire is also being investigated, with the location simply given as 'Garvagh'.

'An image of Banagher GAC' was reported on the bonfire at Greystone Road, Limavady, while in Coleraine, police are investigating election posters being placed on pyres at The Crescent and Harpur's Hill.

Assistant Chief Constable for Local Policing, Bobby Singleton, said the Public Prosecution Service (PPS) would have responsibilty for decisions in relation to prosecution.

An image of the local political representative was placed on a pyre close to her home.

"We have already gathered and secured evidence of potential offending, appointed investigators, commenced enquiries for each of these incidents and engaged with the Public Prosecution Service who will ultimately have responsibility for decisions in relation to prosecution," he said.

"The vast majority of people celebrate their culture peacefully and lawfully and do not want cultural celebrations to be undermined by anti-social behaviour, criminal activity or hate directed towards others.

“I’m appealing for anyone with any further information but specifically information on those who may have been responsible for the potential offences to provide it to the police to bring those responsible to justice.

“Anyone with any information should contact their local neighbourhood policing team on 101 or alternatively, Information can also be provided to Crimestoppers anonymously on 0800 555 111 or online at www.crimestoppers-uk.org.”