An image of the local political representative was placed on a pyre close to her home. 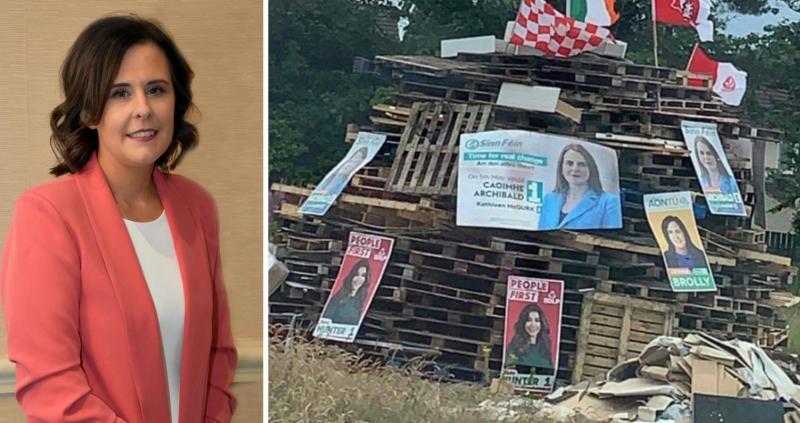 Gemma Brolly's election poster was placed on a bonfire in Garvagh, close to her home.

A County Derry primary school teacher and political representative has said she felt 'victimised in her own home' after her image was placed on a nearby bonfire last night.

Posters belonging to Gemma Brolly, who ran for Aontú in the recent Assembly Election, were placed on a bonfire in Garvagh alongside those of other politicians and a number of Derry GAA flags.

After the photograph was sent to her on Monday evening, the mother-of-four said her first thoughts were about her children.

“It was strange. I was a wee bit gutted, it's not something you ever want to see, but my immediate reaction was for my children,” she told Derry Now.

“I did not want them finding out or seeing it if possible, and that's hard nowadays. My eldest now is ready to head to secondary school and has her own phone.

Another poster of Mrs Brolly was also placed on a bonfire in County Antrim.

“There is only so much I can control there, so last night was very much about protecting their eyes and ears.

“When posters disappear, there is that expectation, but a bit of you hopes that society has moved on from that.

“The fact that I'm quite new to the scene and have had very positive relationships from all sides of the community, there was that wee bit of hope people had moved on.”

The anxiety of the situation was exacerbated by the fact that the bonfire in Garvagh was so close to the primary school teacher's home.

“Last night I have to say I did feel anxious about the one in Garvagh,” she said.

“The worry was when you add that bitterness to alcohol, my house was within walking distance really, so there was anxiety there.

“When I reported it to the police I mentioned having children in the house, so the officers said they would be in the area and drive by to help with that.

“You feel victimised in your own home for that night. There is an eeriness over that night, and as a child there always was.

“You didn't go out on the Eleventh Night, you kept yourself to yourself, and that hasn't changed, but last night was a different level.”

Mrs Brolly reported the incident to police, as well as further images of her poster on bonfires in Carnany and Ballymoney, County Antrim.

Disappointing but yet unsurprising display of bigotry on the bonfire in Garvagh again this year. I’ll not hold my breath for any condemnation by local unionist reps. https://t.co/ClunrSnawZ

However, they were unable to remove the posters, and said there 'was no evidence' in relation to the bonfire in Ballymoney, which was in flames by the time they arrived.

“One of my colleagues had told the police the poster was stolen property and to remove it from the bonfire,” she said.

“They commented that they may not be able to do that, and they told me they had tried to do that but it began to get too contentious.

“They also said they had tried to find out who organised it and where the posters came from, but they had no answers, which was of no surprise.

“The police were empathetic and personable, but they were ringing to say 'we know how you feel, but there's nothing we can do'.

“When I thought about it after, I thought that as long as this happens, this will continue. It's been going on since we were children.”

The burning of flags & election posters on bonfires is wrong, deeply offensive & a hate crime.

I’ve reported this to the PSNI.

There’s an onus on unionist political & community leaders to stand up against displays of sectarian hatred & make it clear there is no place for them. pic.twitter.com/fr2cTMINip

Mrs Brolly called on all stakeholders to come together to find a way of easing the tension that clings to the July fortnight.

“To my disgust, this will all pass in a week again, and not rear its head until this time next year,” she said.

“We'll go through this same cycle unless people make a conscious decision to say 'we're not going to let this pass'.

“I understand the police's position, but if we can't rely on our police force, who have we got? We are wide open.

“I know this does not represent people in the community, but they are afraid. They even stand by and watch it, but they daren't speak out or take a step to remove those posters.

“It's about getting to the point where the good overpowers the evil. There has to be enough sensible, good-hearted people with a genuine wish to progress to step forward.

“Until that happens, we're not going to see any change. Now is the time to plan for next year, it's too late when you're standing on the Eleventh.” 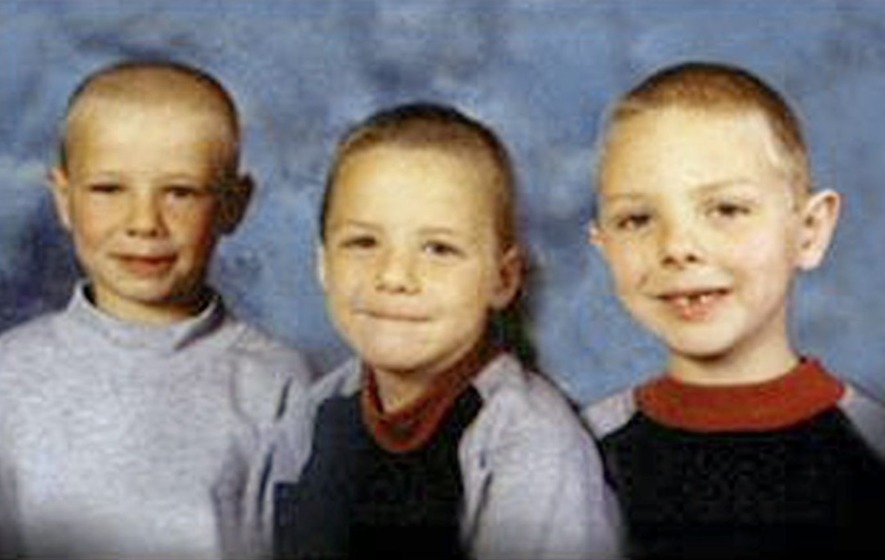 Originally from Rasharkin, County Antrim, Mrs Brolly said the murder of the three Quinn boys – Jason, Mark and Richard – in 1998 is always in her mind at this time of year.

She said the incident should have created a will to ensure nothing similar ever happens again.

“It comes at this time every year. You always want to hold their memory at the centre and protect their family,” she said.

“That's what people nearly should be reminded of, yet there is such sadness and devastation, not only in what happened, but in the fact the death of three children wasn't enough.

County Derry MLAs hit out as posters placed on bonfires

A number of Derry GAA flags were also placed on the pyres.

“It wasn't enough to bring about the changes that were needed, and if the death of three children isn't enough, what is going to be enough?

“There is an onus on all communities to act proactively and bring about change in a positive way to ensure something like that never happens again.

“We're not at that place yet, where we can safely say that will not happen again and that's not good enough,” she added.

The PSNI said they were aware of the items placed on the Garvagh bonfire.

"The Police Service has received a number of complaints relating to election posters and other emblems being placed on the bonfire in Garvagh," said a spokesperson.

"We are gathering evidence in respect of these complaints and will review to establish whether offences have been committed."