The late Bishop of Derry, Edward Daly: A Man For All Seasons

Exhibition to celebrate the life, influence, work and legacy of popular cleric 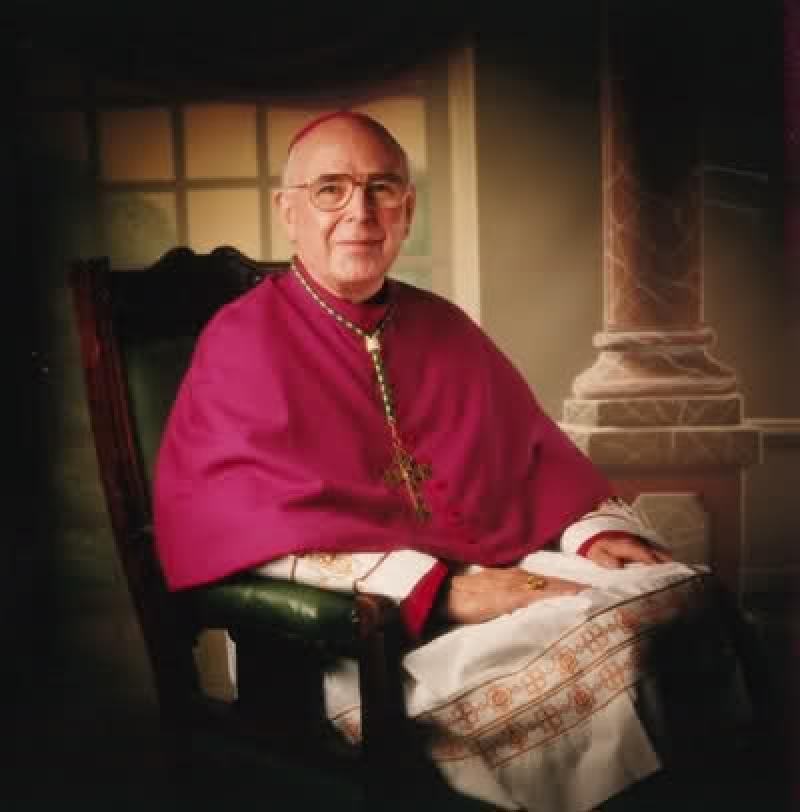 An exhibition is to be staged next month to celebrate the life, influence, work and legacy of the late Bishop of Derry, Edward Daly.

A Man For All Seasons will pay tribute to the wide and varied contribution he made to peace and reconciliation in Ireland, to Derry and its diocese as well as the search for justice and to healing the differences that divides the North.

The exhibition, being supported by Derry and Strabane District Council. will be staged in St. Eugene’s Cathedral Hall, Infirmary Road, close to St Eugene's Cathedral in Derry from Monday 8 to Sunday 14 August.

The son of shopkeepers Tom and Susan Daly (nee Flood), Edward Kevin Daly was born in Ballyshannon, County Donegal, but raised in Belleek, in the adjacent county of Fermanagh the eldest of six siblings.

After attending St Columb's College in Derry as a boarder, he spent six years studying towards ordination to the priesthood at the Irish College in Rome.

He was ordained a priest for the Diocese of Derry in Belleek on March 16, 1957.

His first appointment was as a curate in Castlederg in County Tyrone, ahead of being appointed a curate in St Eugene's Cathedral in Derry in 1962. 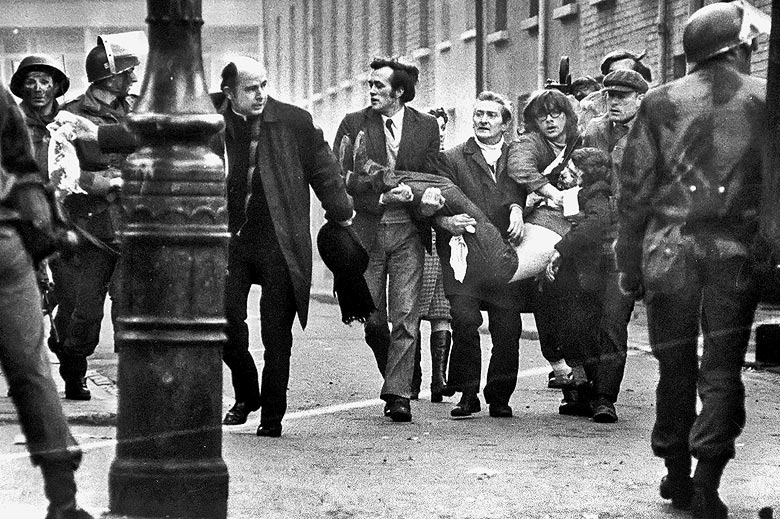 He left briefly in the 1970s to serve as a religious advisor to RTÉ in Dublin but spent the majority of his career in Derry.
During his time in the city, he took part in the civil rights marches and had first-hand experience of the Battle of the Bogside in 1969.

The then Fr Daly came to worldwide prominence after the Bloody Sunday murders on January 30, 1972 when, after being close to one of those shot dead, Jackie Duddy - to whom he administered the Last Rites - a photographic image of him waving a blood-stained handkerchief as the fatally-wounded 17-year-old was carried from the Bogside was flashed across the globe.

Commenting on the killing, he said: the talented amateur boxer was 'a young fella who was posing no threat to anybody being shot dead unjustifiably.

He constantly kept a photograph of Jackie given to him by his family on his desk.

Prior to Bloody Sunday, he was sympathetic to the 'old" IR,A' of which his father was a member, but the events of Bloody Sunday left him of the opinion that 'violence is completely unacceptable as a means to a political end,' which led to a tension with the Provisional IRA throughout his career.

In 1973, he worked with RTÉ in Dublin as a religious adviser for several months, appearing on numerous television programmes and contributing to many television documentaries on religious and Northern Ireland affairs. 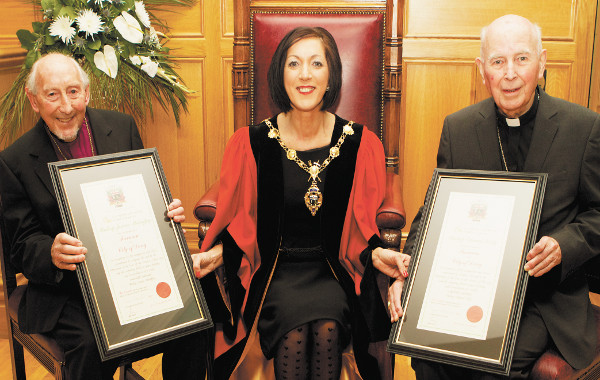 Bishop Daly was awarded the Freedom of the City by Derry City Council in 2015 along with his long-time friend, Dr James Mehaffey, the retired Church of Ireland Bishop of Derry and Raphoe, from Mayor Brenda Stevenson.

He was appointed Bishop of Derry in 1974 - at the age of 40 becoming the youngest bishop in Ireland.

His tenure was marked by conflict with the IRA over that organisation's use of violence to advance its political cause for a united Ireland and he and IRA spokesmen repeatedly exchanged words via the local press.

The Catholic bishops of Ireland discussed the possibility of excommunicating IRA members several times during his tenure, often in the aftermath of a particularly bloody attack, though no decision was ever reached.

He was always reluctant to excommunicate and used the motto 'better to communicate than excommunicate,' for which he was severely criticised by the British tabloid press, but he was outspoken in his opposition to violence by both sides.

He introduced a ban on paramilitary trappings at Catholic funerals and in 1976 organised a protest march through Derry city centre in a response to an increase in sectarian murders, at which he was joined by almost all the clergy in the city and led by his Protestant counterpart, an event which was unprecedented in the city's history.

Throughout his career and particularly his tenure as Bishop of Derry, he took a keen interest in the criminal justice system, seeking to attend to the needs of prisoners, internees and victims of miscarriages of justice including the Birmingham Six (who were wrongly convicted and sentenced to life imprisonment for the 1974 Birmingham pub bombings, and whose convictions were quashed in 1991). 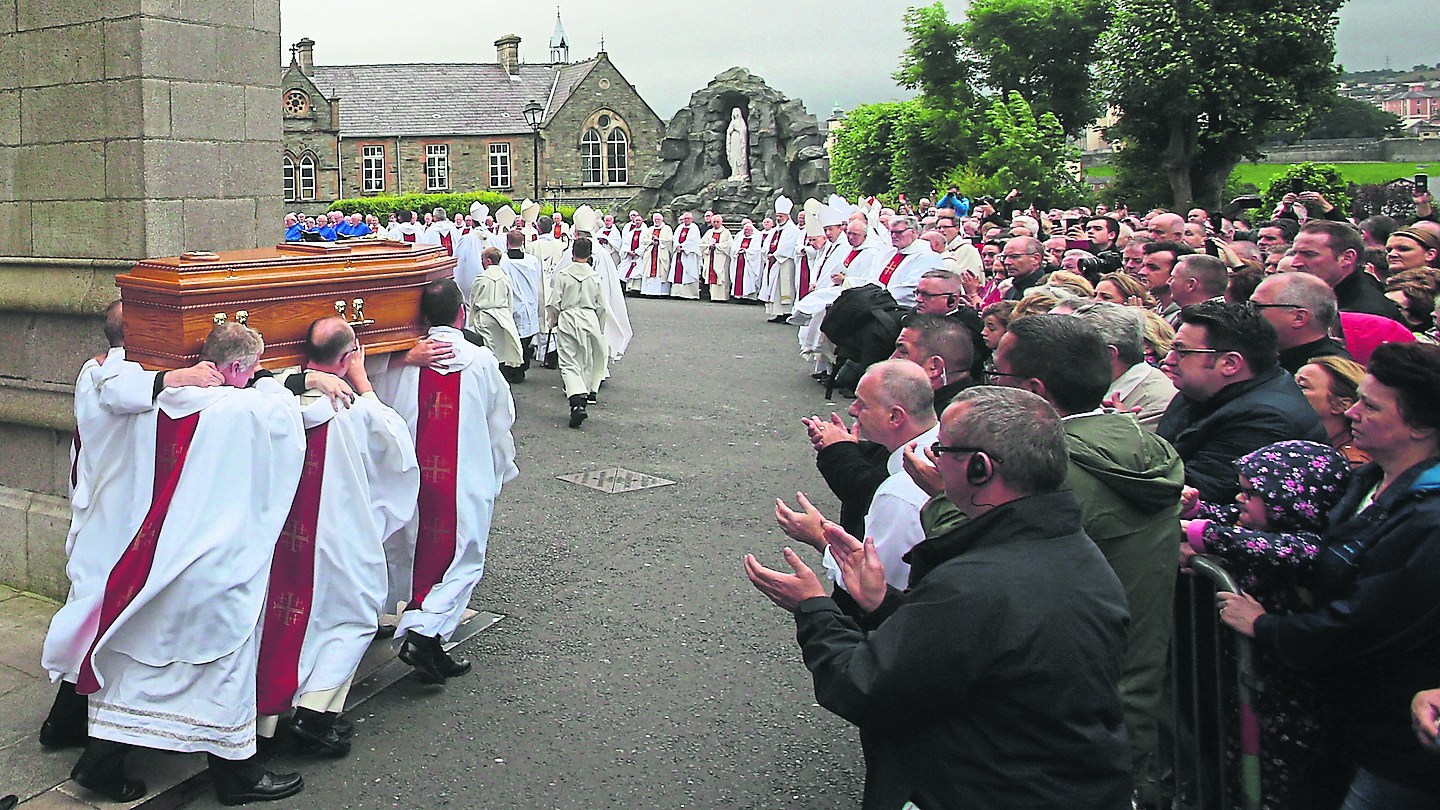 The scene in the grounds of St Eugene's Cathedral as Bishop Edward is carrying to his final resting place.

Along with the then Catholic Primate of all Ireland, Tomás Ó Fiaich, he lobbied the British Government in 1977 against its decision to revoke Special Category Status (political prisoner status) from IRA prisoners and subsequently their treatment as criminals.

When the issue culminated in a hunger strike in 1981 which resulted in the deaths of ten prisoners in the Long Kesh prison, he lobbied the European Commission on Human Rights to intervene.

In 1979, he was involved in planning a visit by Pope John Paul II to Armagh, scheduled for September and which had won the approval of the British Government, but the visit was cancelled in the wake of the IRA's assassination of Lord Mountbatten and the Warrenpoint ambush (in which 18 British soldiers were killed), both on 27 August 1979.

"I was crying with excitement. It feels like a dream"

The visit was transferred to Drogheda, in the same archdiocese but across the border in the Republic, where the Pope appealed to the IRA to give up armed resistance.

While he was always willing to attend to the religious needs of IRA members, he refused to engage in any formal meeting until 1992, when John Hume, the leader of Social Democratic and Labour Party (SDLP), who was attempting to negotiate a truce with the IRA, and with whom he was close friends, convinced him to meet Gerry Adams  and Martin McGuinness.

He later remarked that he shared much common ground with the two, particularly Derry man McGuinness.

Despite the tension between Catholics and Protestants, Daly maintained a personal friendship with James Mehaffey, the Anglican (Protestant) Bishop of Derry and Raphoe from the latter's appointment in 1980.

Among many joint projects they co-founded two charities with the intent to promote community healing in Derry after years of sectarian violence.

He retired from his position as Bishop of Derry in October 1993, after suffering a stroke. He was succeeded by Bishop Séamus Hegarty and in retirement took up the post of chaplain at Foyle Hospice. 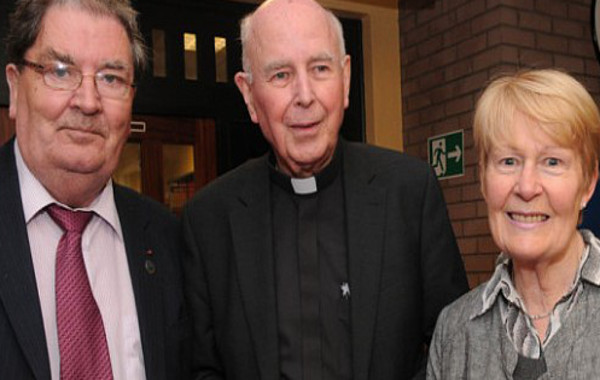 Former SDLP leader and Nobel laureate John Hume and his wife Pat with their dear friend and former Bishop of Derry Edward Daly.

He and Bishop Mehaffey were awarded the Freedom of the City in 2015. Then Mayor, Brenda Stevenson, said the joint award was in recognition of the two bishops' efforts towards peace and community cohesion.

Bishop Daly passed in Altnagelvin Hospital on August 8, 2016, at the age of 82, having been admitted after a fall several weeks previously - he had also been diagnosed with cancer.

Among those who paid tribute was President Michael D Higgins and his predecessor Mary McAleese as well as the leaders of various religious denominations.

Archbishop Eamon Martin, Primate of All Ireland, described Bishop Daly as having 'literally spent himself in the service of others' and said he would remembered as 'a fearless peace- builder.'

The bells of the Cathedral tolled for one hour on the morning of Daly's death while many local people visited the church where is remains laid in state.

His coffin was sealed at midday on August 11 and buried after Requiem Mass in the grounds of St Eugene's Cathedral alongside his predecessor, Bishop Neil Farren. 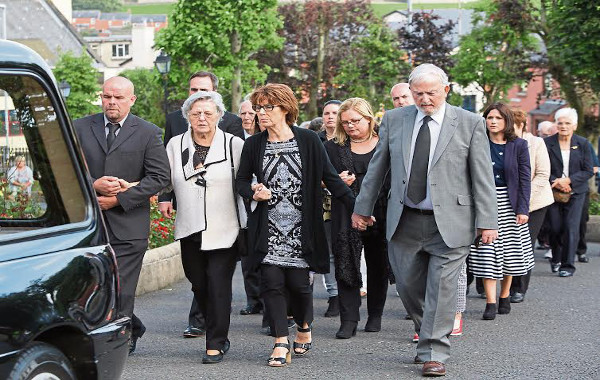 The funeral, conducted by the incumbent Bishop of Derry Donal McKeown, was attended by multiple religious and political leaders from across Ireland and retired leaders from throughout Bishop Daly's career. A message from Pope Francis was read out at the beginning of the service.

Hundreds of members of the public listened to the funeral service in the Cathedral grounds and surrounding streets.

Many of those present wept openly as his coffin was greeted with applause as it was carried out of the Cathedral for burial.