"They footer with the ball in Donegal, but the real thing's up in Derry." 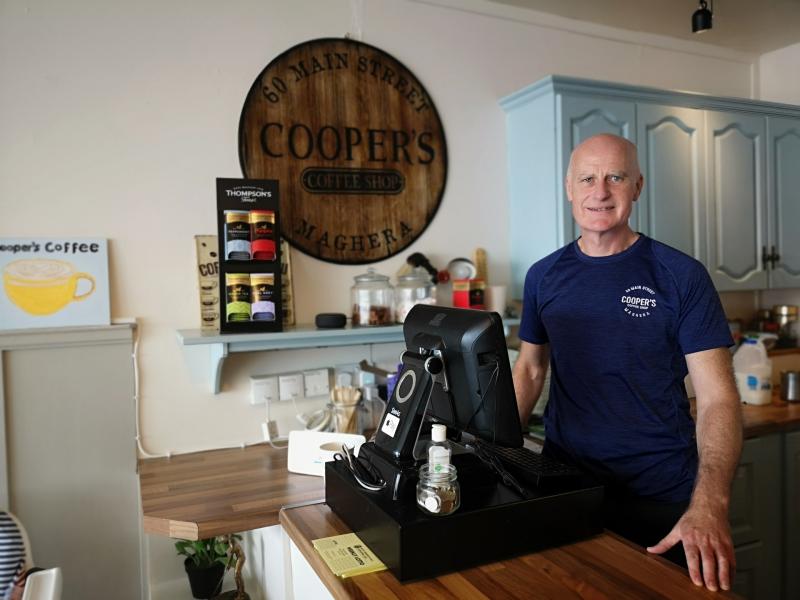 James Devlin, who along with Francie McEldowney and Vincent Harkin, performed 'Ooh Aah GAA' on RTÉ back in 1993.

A classic Derry supporters' song has been making its mark on a new generation thanks to the current success of the county's senior footballers.

Released almost 30 years ago as the Oakleafers prepared for their first All-Ireland final since 1958, 'Ooh Aah GAA' has become a cult classic.

Now, thanks to the power of social media and Derry's surge in form under Rory Gallagher, the song is passing to the next generation of Oakleaf supporters.

James Devlin now runs Cooper's – a popular café on Maghera's Main Street – and has been pleasantly surprised by the song's enduring appeal.

“It completely lay dormant for a while, but people would always mention it, or maybe quote the lyrics to you,” he told Derry Now.

“Ten years ago, somebody found the video of it and I put it on YouTube. It probably picked up 10,000 views from that, and lots of positive comments.

“It just took off from there, and that was even before the Ulster championship, maybe January or February. Now with every match that's been won, it's gone on from there.

“Enda McKaigue was saying they had their six-year-old's birthday at the weekend and 'Ooh Aah GAA' was played when everyone was on the bouncy castle.

“Parents are always telling me now about their children repeating it in the house, and that's coming from the sharing of it that's going on.”

Back in 1993, James, who has played to crowds at Glastonbury, Wembley Conference Centre and Dublin's National Stadium, was touring Ireland as Derry's footballers began the inexorable rise that would culminate in a first ever All-Ireland title.

“Myself and my brother Maurice had always been talking about writing a song for Derry, and then in '93 the team was going well again,” he said.

“We were on holiday in Donegal and we were talking about it, throwing ideas around, but we weren't really getting anywhere with it.

“He was heading back to Dublin in the morning and he said to me: 'Here, I had a go at that.' He handed me a couple of sheets of paper.

“I looked at it and said: 'That looks like it', so I put the tune to it and it was after the rainy day in Clones, which is a line in it. 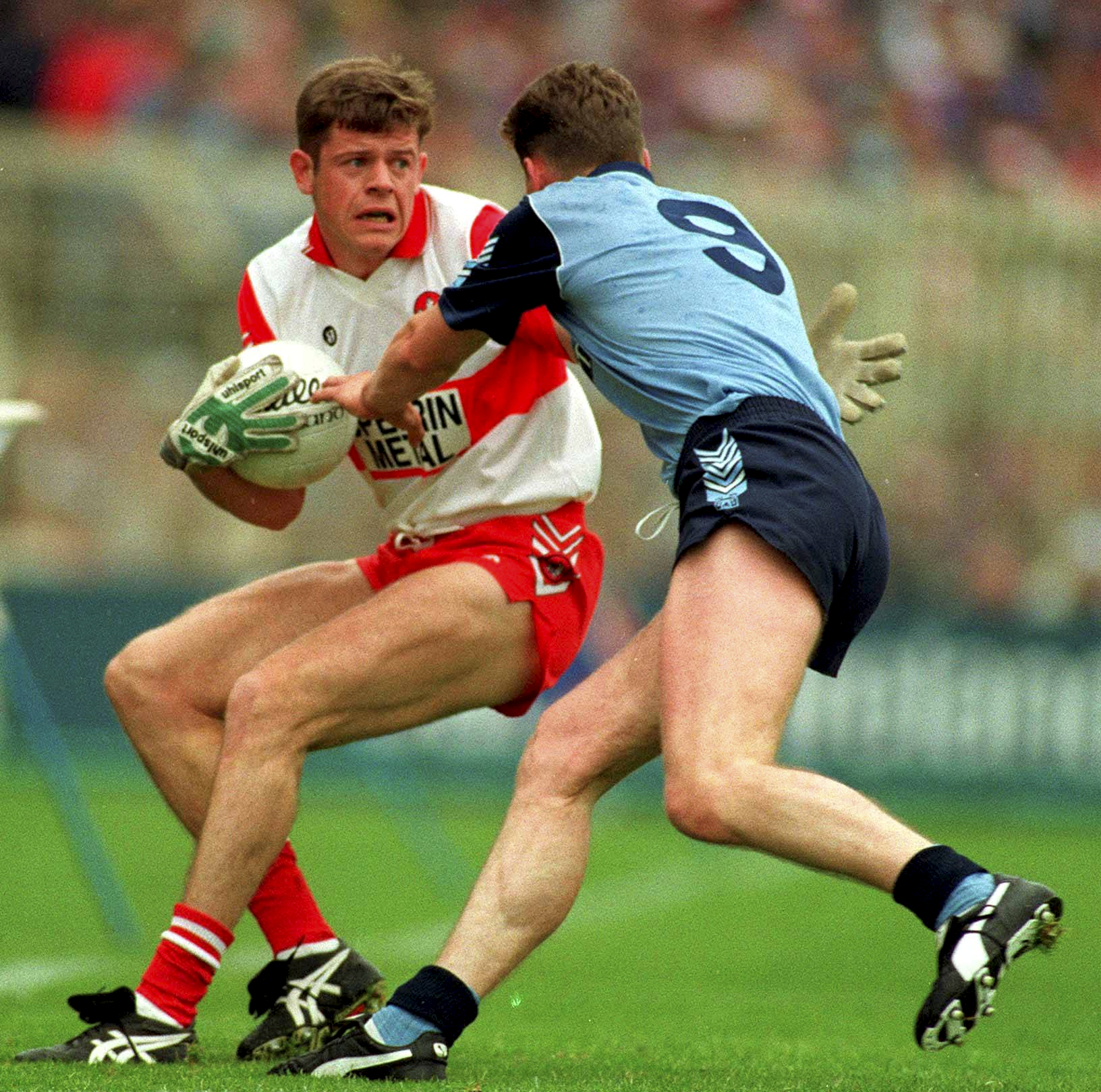 Anthony Tohill in action during the 1993 All-Ireland semi final win over Dublin. Pic by Ray McManus/Sportsfile.

The lads waited until after the nerve-shredding semi final win over Dublin before recording the song, and with limited options, their eventual studio was far from a GAA heartland.

“We were ringing round studios to find one that could do it that quick, and we got a studio on the Shankhill Road, called Dove Studios,” he said.

“After that we had to try and get the song pulled together very quickly. The shops were selling all these songs everywhere, but there was a particular supporters' shop in Maghera here.

“They actually took a vacant shop and were selling scarves and everything, and there could have been six or eight songs on sale. 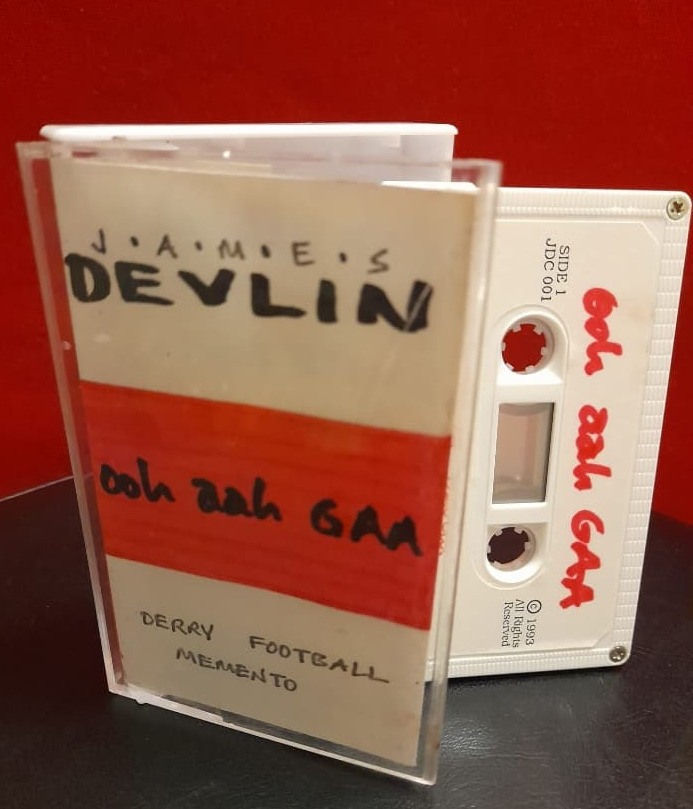 One of the many cassettes sold at the pop-up supporters shop in Maghera.

“So I left a hundred copies up and that evening, somebody in the shop rang me and said 'you better get us more of those'.

“I gave them the other hundred copies and they said 'actually, you need to give us more', so we had to go back to Dove again.

“The shop kept coming back to say they'd sold out, so immediately the song had caught on. I'm sure there are cassettes in people's houses from that time.”

Buoyant supporters and fortunate timing yielded a perfect storm, and the success of the song resulted in the band being asked to play the song on RTÉ's hugely popular 'Up for the Match'.

“There as other stuff going on that week as well; the place was football-crazy,” said James.

“Gay Byrne did his radio show from the club here in Maghera that week, and Joe Duffy was there and Radio Foyle, so they did those things with me as well.

“It culminated then in the Saturday night before the match to go on and do that live performance. I remember Adrian McGuckin being there, and it was lovely to see faces that we knew.

“It was great to be involved in it. The football was what it was all about, but there was colour that goes around that, and music is part of that.

“Derry hadn't been in a final since 1958, so to be a part of that was very exciting, and then at the match everyone was saying they'd seen us on the TV last night and enjoyed it.

“The day after the All-Ireland final, another brother was driving up O'Connell Street and was playing it out the window of the car.

“He got stopped at traffic lights and a woman came up and said she'd seen it on the TV, so he popped the cassette out and gave it to her!”

The footballers rode the wave of hype and goodwill all the way to the All-Ireland title, and the delay in the players' return to Maghera on the Monday created an unforgettable collective experience.

“Before the match, we did all the radio that was available, but the Monday night back in Maghera – which has become famous – there was a stage set up with bands playing,” said James.

“The team didn't get back 'til about three o'clock so everybody had to amuse themselves all evening; there was a lot of drinking, a lot of music.

“It's a legendary night that will never be forgotten by anyone who was there. We were playing in the middle of the town to 10,000 people who all knew the song.

“Everyone was waiting for Sam Maguire to come back for the first time, and it was a great collective experience, the whole town was filled with people out on the street.”

While chatting to James, Enda McKaigue himself arrives and asks him the question on everyone's lips.

“No, there will be no sequel,” he responds.

“We did a song for Glen, because I'm a proud Watty and that was a bit similar for us. Locally, people would often say when Glen were doing well, asking if we were going to write a song for Glen.

“You're worried about singing when you haven't won, but they were knocking on the door, so last year we had the song ready.

“It was never going to see the light of day unless they won, but they did, and the song came out and did really well, like 'Ooh Aah GAA'.

“I've got to thank my brother for writing the lyrics, because that's what made the song so successful. The lyrics are about an event, it's something that's very easy to remember and sticks in people's heads.

“As a songwriter, it's a very unusual experience because you're sitting with a song that you'd love everybody to hear, but you know if a result doesn't go a certain way, nobody will ever hear it.”