The fundraiser will take place at the end of May. 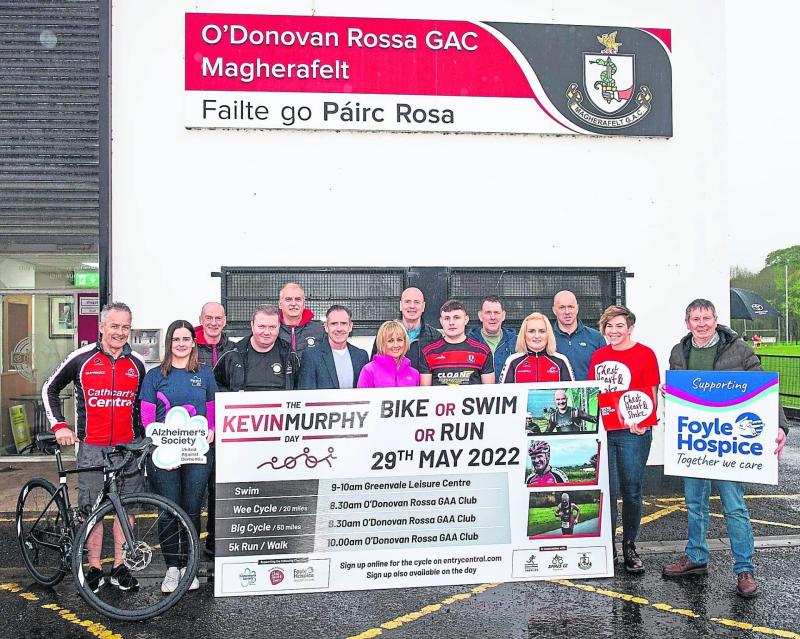 Organisers at the launch for the charity fundraising day to be held in memory of the late Kevin Murphy which will take place on May 29th.

Sunday 29th May has been announced as the date for a charity fundraising event to celebrate the life of well known local sportsman, Kevin Murphy.

Kevin unfortunately passed away on 23rdDecember 2021 in tragic circumstances. He was a well known and popular member of the Magherafelt community, frequently giving freely of himself and his time to help others.

A keen triathlete, runner, cyclist, and golfer, as soon as he crossed the white line it was game on and he was competitive to the end, but always had time to enjoy the craic and endless stories at the end. Kevin was the 1st person to chair Magherafelt Harriers.

He had a great passion for running and was an incredibly accomplished runner and triathlete, providing inspiration to so many fellow competitors.

First and foremost however Kevin was a family man. He was devoted to his wife Siobhan and son Cormac.

Kevin was never prouder than when he was watching Cormac play for his beloved O’Donovan Rossa team.

Whilst competing in his many sporting events over the years he was mindful of the fact that he was fortunate of being able to do so, and to that end always sought to raise money for charity where possible.

In his work life within the Civil Service Kevin was the Head of Brexit Legislation Transition for DAERA. He was a team player within the workforce, encouraging of people to apply for promotions, assisting them with application forms, providing himself as a point of reference whilst often prepping people for interviews by organising mock interview panels.

All the while providing an ear to listen to and a shoulder to lean on.

Participants on the day can either complete a swim at the Magherafelt Leisure Centre from 9am to 10am.

A cycle which will set off at 8am from O'Donovan Rossa Park with a 20 or 50 mil course to choose from and there will also be a 5K walk and run at the Gaelic ground starting at 10am alongside a kids run around the football pitch with medals for all finishers.

Donations can be made via the Just Giving page or search on Facebook.